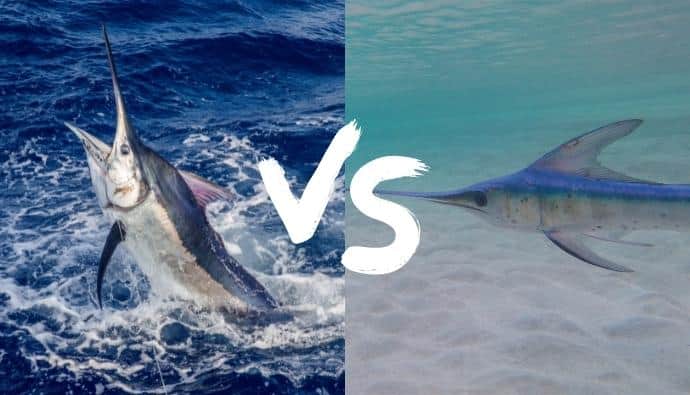 There are about 33000 fish species living in different parts of the world today. It is therefore understandable if anglers have a tough time identifying certain species, particularly when they share close similarities like the marlin fish and swordfish.

What Is The Difference Between A Swordfish and a Marlin?

In this section, we will go through a comparison of marlin vs. swordfish, pointing out the areas of similarities and differences.

Marlin and swordfish are very similar in appearance at first glance, which explains why they are often mistaken for one another. However, once you look closely, you can spot a few differences between them.

While both marlin and swordfish have long pointed bills, marlins tend to be narrower and longer than swordfish, which have longer bodies. The coloring is another difference in appearance, as swordfish are usually gray or silver while marlins have a blue top with a gray or silver underbelly.

Both fish species are large fish, but marlins tend to grow bigger than swordfish. They both grow up to 14 feet, with the biggest marlin fish getting close to 2000 pounds while the biggest swordfish are around 1400 pounds.

Being large fish, marlins and swordfish feed on smaller fish and squid. As marlin are typically bigger than swordfish, they go after large sea fish like tuna sometimes.

Marlin and swordfish hunt for food using identical patterns, as they use their long pointed bills to slash at their prey. They are both known to have great hunting skills.

The dorsal fin is the main difference between marlin and swordfish. If you are struggling to tell their body shape apart, you simply cannot miss the difference in their dorsal fins. The dorsal fin of swordfish is taller than that of marlin fish, resembling the fin of a shark.

Marlin, on the other hand, has a crest-shaped fin that is streamlined to their back, giving them speed. The coloring of their dorsal fins can also be used to distinguish them, as marlin fins have a blueish color while swordfish dorsal fins are gray or silver.

Swordfish are highly migratory, moving from one water body to another. They usually travel thousands of miles to reach a new habitat.

Marlin, on the other hand, typically spends their entire lifespan in one location. You can find marlin in deep seas and tropical oceans.

Also known as broadbills, swordfish is a billfish that belongs to the Xiphiidae. Swordfish are named after the structure of the bill, which is shaped like a sword. While they are closely related, swordfish and marlin are not the same species.

As a matter of fact, swordfish are the only species in the Xiphiidae family. We will discuss more about swordfish in detail below.

Swordfish is a large fish that is a prize game fish for anglers. Swordfish have long point bills that they use to hunt. They catch their prey by slashing them with their sword-like bill. Swordfish have large bodies but are shorter and rounder compared to marlin.

While young swordfish have scales and teeth, you cannot find them on adult swordfish. This is because they lose all their teeth and scales as they grow older. The dorsal fins are another clear distinction when comparing swordfish vs. marlin.

Talking about habitat, swordfish are known to be highly migratory animals. This means that they do not stay in one habitat throughout their lifespan; instead, they move around from one water body to another.

If you are looking to catch swordfish, you can find them around depths of 1,800 feet. Swordfish has a muscle next to their eye that they use for heating up their eyes and brains. The function of this muscle, when heated, is to provide a clearer vision for the fish. This improved vision helps them to swim better in the darker, colder, and deeper areas of water.

Swordfish are not the most social fish species, as they usually swim alone or in loose groups.

Swordfish feed on small fish and squid that they hunt with their bills. There is a misconception about how swordfish hunt, as some people believe that they stab their prey. Instead, they use their bills to slash at their prey and stun them.

Most swordfish reach ten feet in length, while some might grow up to 14 feet. The average weight for swordfish is 1400 pounds.

One of the key differences between swordfish and marlin is their life cycle. Marlin usually lives up to 20 to 30 years on average, while swordfish live only ten years or less.

The life cycle is also different as female swordfish do not lay eggs until they are 4 or 5 years old. This is in contrast to female marlin that reaches sexual maturity after two years.

Below are some interesting facts about swordfish that you should know.

Marlin is a prize game fish that is a member of the Istiophoridae family. Fishermen love marlin because of their size and speed. As a matter of fact, they can clock at a speed of 100km/h. Marlin and swordfish are closely related, but they are not members of the same family, with swordfish belonging to the Xiphiidae family.

Marlin has a long body with sharp bills that look like spears. They used their bills for hunting, slashing, and stunning their prey in order to catch them. The dorsal fin of marlin fish is crest-like, having a blueish color. Due to their size, speed and agility, marlin is a choice game for many fishermen.

Marlin comes in different colors, including white, gray, blue, and black. Black marlin can be found in shallow water, hunting for prey. White marlin and Atlantic blue marlin are endangered species due to overfishing.

Unlike swordfish, marlins do not migrate a lot during their lifetime. They can be found in tropical deep-sea oceans in different areas of the world. You can find them in the Pacific Ocean, Atlantic Ocean, and the Indian Ocean.

Marlin, like swordfish, feeds on small fish and squid. However, they go after bigger prey like tunas, flying fish, mackerels, and dolphins as well.

Marlin has a swim bladder that allows them to go deep into the water column at a fast speed. This does not only enable them to fish better but makes it difficult for anglers to catch them.

In the comparison of marlin vs. swordfish, the size is a key difference. Marlin are usually longer than swordfish growing up to 16 feet long. The average weight for marlin is 1400 pounds, while the biggest ones grow close to 2000 pounds.

Marlins have a longer lifespan than swordfish, living up to 20-30 years. They also reach sexual maturity around two years old, two years faster than Swordfish.

Below are some interesting facts about swordfish that you should know.

In this section, we will answer some frequently asked questions related to marlin vs. swordfish.

Swordfish and marlin are both large fish, but marlins tend to grow bigger. Marlins are usually longer and larger, weighing close to 2000 pounds.

Are Swordfish The Same As Marlin?

Swordfish and marlin are not the same animal. Although they share certain similarities, such as having bills and a similar diet, they are not the same species as they belong to different families.

Is Marlin Same As Sailfish?

No, a marlin is not the same as a sailfish. They are both billfish but have clear distinctions, such as their body structure and hunting style.

Is Marlin A Good Tasting Fish?

Yes, marlin is an edible and good-tasting fish. However, it usually contains mercury and toxins, so you have to ensure to cook it properly.

There you have it, we have discussed an in-depth comparison of swordfish vs. marlin. Marlins and swordfish are both billfish, great hunters, and prize game, but are not the same animal.

If you are confused about the species of fish that you come across, look out for the dorsal fin and body shape of the fish. It is also important that you do not confuse any of these animals with a sailfish.