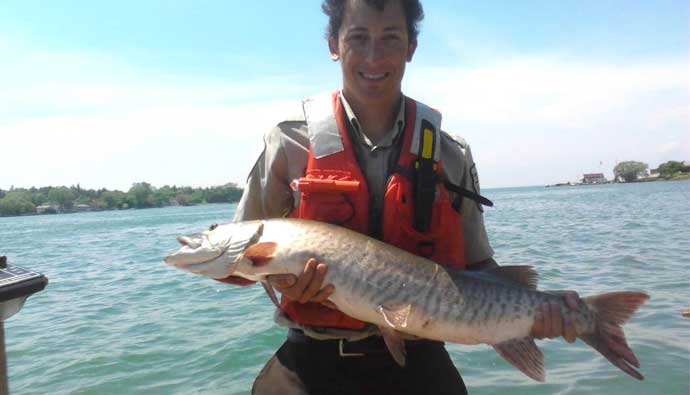 Muskellunge, or muskie, as they are commonly called, are one of the largest freshwater fish in North America.

If you have ever been muskie fishing and landed one of these huge fish, you know what an adrenaline rush catching it can be.

If you haven’t had the chance to go muskie fishing, you’re missing out on a great opportunity.

In this article, we are going to go in-depth on what a muskellunge is, how to find them, how to fish for them, and much more.

While a muskie and northern pike are similar, they are not the same thing. Muskie grows to be much larger than the commonly known northern pike.

A muskellunge or muskie is considered an apex predator in the fish world. Adult muskellunge can reach weights up to 60 pounds or more.

Adult muskellunge are predators who are very stealthy and solitary similar to their cousins, the northern pike.

They are among the top predators and will eat preys that are larger than most other freshwater fish.

Muskies are a light silver, brown, or green, with dark vertical stripes on the flank, which may tend to break up into spots. In some cases, markings may be absent altogether. In comparison, northern pike have light markings and darker bodies.

Muskies are known to be an aggressive predatory fish. This is especially true around the spawning season. The males can become very territorial over spawning grounds.

Muskie will usually choose an area that has a sandy or gravel bottom for spawning. This is to prevent the eggs from sinking into the mud and suffocating the larva.

Wherever muskie are found it is a sure bet they are very large. Baby muskie develops rather quickly and can reach up to 12 inches long in a very short time after hatching.

adult muskellunge have been known to live to very old ages. One caught in Canada was estimated to be over 30 years old.

The world record adult muskie so far weighed in at 61.25 pounds was caught in November 2000 in Georgian Bay, Ontario. It is estimated there are some that are far larger.

Muskie isn’t the same as pike family although they look similar. Many anglers get them confused with the northern pike fish or the hybrid tiger muskellunge.

However, as you can see below, the muskellunge has either a clear, spotted, or barred pattern on their side.

It’s important to know the differences since the fishing regulations in your state might be a bit different for each fish.

A muskie is a predatory fish. For this reason, they are not discriminating when it comes to their diet.

Muskies have a very large stomach in proportion to their bodies. They can easily eat prey up to two-thirds their body length.

A few common food sources for muskie are frogs, bugs, muskrats, and even ducks. They are also known to eat other muskies and smaller fish.

Larger food sources such as these are usually gone after by muskie during the onset of cooler weather in preparation for winter.

However, in the spring when their metabolism slows down, they are known to consume much smaller meals.

How to Fish for Muskie

Going after a large muskie can require some serious tackle. These are very large fish and hard fighting when hooked.

Contrary to popular belief, you do not have to have large lures to catch a muskie. They will actually hit any size lure and actually prefer smaller lures. This is especially true in the spring and summer months.

Spinnerbaits or long shallow-running Rapalas are a good choice for muskie fishing. These lures present a more accurate representation of the natural food source for muskie.

Trolling is always a good idea when possible. It is at this point you can use larger lures because of the low threat of snagging in grass and weeds farther out.

Crankbaits work well in areas of grass or cabbage. Often, these can be hot spots for muskie laying in wait to ambush unsuspecting prey.

Perch colored and fire tiger is good during the day and red seems to be good in the evening.

In the fall months, topwater is a big draw when it comes to musky fishing.

A lot of main manufacturers makes specific duck, bat, and huge rat lures that are weedless to help an angler target the muskies that are holding in the weeds and feeding on whatever comes by.

Large topwater lures are designed for catching muskie and pike, they can range from six inches all the way up to nine inches, not counting any extra appendages.

The Whopper Plopper 190 is a great lure for musky due to the fact that it is just plain too large for most Largemouth Bass to be able to engulf, therefore 99% of the hits you will get on these lures will be the mammoth musky and northern pike that lay in wait in the waters.

What Line Should You Use?

Steel leaders are a must when fishing for muskie. It is advisable to use as dark of a leader as possible. If it is silver for example, it is sure to be seen.

Braided 80-pound test line is the go-to for muskie. You want a strong line that will help you get the muskie quickly into the boat and released for higher survival rates.

As for catching them, while it’s true the Canadian record of 65+lbs was caught on 8 lb line and a 4″ rapala, the standard is 80 lb braid and heavy, stout rods and reels. – JP

Don’t be surprised if even when using a steel leader, it gets bitten through the muskie teeth. For this reason, it is a good idea to carry plenty of extras.

J hooks, as well as octopus hooks, are often used. When using lures, often the treble hooks may need to be replaced.

It is a good idea to keep plenty of spares. It would not be uncommon to have to cut a hook, have a leader bitter through or a hook straightened out.

Baitcasting reels are more often the reel of choice for muskie fishing. The baitcaster allows casting into the grass with pinpoint accuracy.

A good quality baitcaster is a must. One good lunge from a muskie can strip a less superior reel. A 200 size or 35 IPT or greater is recommended.

A good quality to look for in a reel is at least a 25 lb drag, one that will not wear out quickly. High quality is a must.

As far as rods go, a 7-1/2 to 9 feet in length, heavy to extra heavy power rod is a good choice. The rod needs to be higher rated than a medium duty.

The extra length helps with casting taming the fight of these powerful fish.

Final Thoughts on the Muskellunge

Muskie are some of the largest freshwater fish in the world. They put up a big fight that will test the strength of any angler.

These are a species of fish that are also very aggressive. Something to keep in mind before you make the mistake of grabbing one by the lip to retrieve a lure.

If you have not yet had to chance to go after a big muskie we at Cast and Spear highly recommend you add it to your bucket list.

You will not be disappointed!

Q: What is the best lure for muskie?

A: According to many anglers, muskie prefers and will strike smaller lures better than large lures. Smaller lures also allow you to get into tight grassy areas where muskie are known to lay in wait for prey.

Q: How big does a muskie get?

A: Muskie can reach sizes of over 60 pounds.

Q: When do muskie spawn?

A: In the fall and winter months.

Q: What do muskie eat?

A: Muskie is a predatory fish. They will eat small prey as well as large. This can be as small as bugs up to as large as ducks and muskrats.