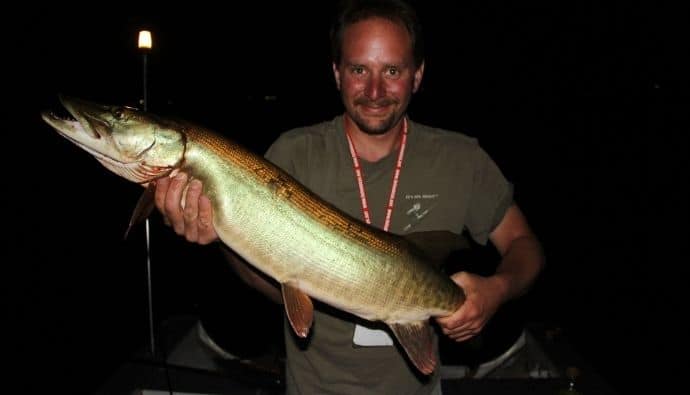 Muskies are tricky species at the top of their respective food chain. They have rows of sharp bites and anatomy built for speed, so they can devour anything they want. Hunting these water monsters has been one of the greatest challenges for an angler. So, how can you get your bait to become a musky’s next meal?

Most anglers who are having trouble luring this fish will benefit from this musky fishing article. All through the musky season or even all year long, it can help you with catching the big musky.

Where to Go Musky Fishing?

Northern Pike and Muskellunge are two of the most popular freshwater fish in Wisconsin, North America.

The sleek torpedo-shaped bodies of these huge predatory species reinforce their speed and aggressive behavior in and around the Great Lakes, Northern pike and Muskie dominate. Fish may be found in all five lakes as well as the adjacent rivers such as Lake St.

In addition, your state’s DNR stocking and yearly fish report is the best place to start when looking for musky lakes near you. Typically, these reports will tell you what lake is supplied, how many fish are stocked, and in what years.

Other fantastic ways to discover a nearby musky lake include checking out your local tackle store, Internet forums, YouTube, or your state’s DNR.

When to Go Musky Fishing?

Muskies, also known as muskellunge, have a reputation for being the most difficult to hunt and targeted fish in the fall by many anglers. They may, however, be caught at your favorite time of the year.

As the shallow water temperatures become more pleasant than the temperature of open water, the muskies move up to the shallower water.

During this period, the female’s body changes. It consumes a large number of meals to provide its bodies with enough nutrition and energy. So, It’s critical to understand the baitfish they eat at this time.

During warm trends, fish the shallow sand or weed flats with glide baits, swimbaits, and even soft plastics. Surface lures are also useful during this period.

Big fish, like muskies, have no specific temperature to reproduce, and no muskies spawn at the same time. The exact moment that a pair of these fish spawns is affected by many variables such as location and water column.

Generally, they will stay when temperatures are 55-65 (°F). When a musky is about to produce or is spawning, they are harder to catch.

You might think that going fishing is futile since they are spawning. But chances are, there’s still a substantial population that hasn’t spawned and is still eating. Fish that haven’t spawned yet are still in the pre-spawn stage, so fish appropriately.

It is the “downturn” stage where males are more active feeders. If a male is caught in the middle of this time, he will almost certainly be covered in wounds and scars. The females musky bite the males during the spawning rite, which causes this. More so, when the female musky has recovered from spawning, all they want to do is eat.

This can be the best fishing time of the year. So prepare the boat and bait to feed them. Bucktails, baits and topwater reel are some of the most popular hooks  to use.

After the cold months, most people are itching to go back to their favorite lakes, searching for muskies. However, fish that are not actively eating at the start of the season, can be a problem. But with the correct presentation, they can be caught.

This fish will not waste energy reeling prey and stuff themselves in deep water now that they have a slow metabolism. As a result, small traps, such as those designed for bass or weeds, are the way to go. You can use a light lure to retrieve them gently.

Summer is during mid-June, and the water temperature should be in the mid-60s. The metabolism of a muskie will be at its height, and the fish will be more active than in the spring.

So this summer, speed up your presentation to the optimal pace for your baits. The fish are attracted to large spinnerbaits, bucktails, and jerk baits.

Remember that, Summer (mid-June) is one of the best catching seasons. You can cast bait from your boat  while drifting into the beach. And it is the best time to watch your rod tip be eaten by these water monsters.

The Muskellunge begin to migrate out of their summer haunts towards shallow water as the evenings become shorter and cooler. The weed flats/edges are a wonderful spot to start fishing this time of year.

The closer the lake gets to transition, the shallower the muskies become. On the other hand, an angler has a chance to line and lure musky during this season.

It is the best time  for anglers to go musky Fishing. They are at their peak in the fall and winter months. Muskies are suspended in the water column or trapped in dark, shallow water.

More significantly, these marine animals can’t get too cold, making them extremely catchable this season. It’s critical to stay as quiet as possible while fishing in the shallows.

Many beginners may be tempted by the high pricing of bait, lures, and other gear. However, making the initial investment in high-quality gear will save you money in the long term.

The first item each musky angler should get is the proper, high-quality release tools. You can get high leverage bolt/ hook cutters, needle-nose pliers, musky-sized jaw spreaders for a chaos tackle.

With musky bait high cost, the least you want is your leader snapping on the hook set of your next musky. It is important to have a high-quality jig for deeper water to get a bite.

A braided leader with a breaking strength of 100 pounds and a fluorocarbon leader with 150-200 pounds is recommended.

When it comes to pike fishing, angler favors a “one-size-fits-all” approach. The same goes for Muskellunge fishing. Something that can throw huge rubber baits but is also supple enough to work with gliding baits and top waters. A long rod is recommended, no shorter than 8’6″, 9′ or longer.

When musky and pike fishing, you get what you pay for when it comes to reels. Understand, however, that any reel will last as long as it is well-maintained. Shimano or Abu Garcia are two brands to consider.

Hundreds of Muskellunge traps are available, ranging in size from tiny spoons to two-pound soft plastic hooks. The figure 8 bait is the most common. However, you can also try bucktails, duck or glide traps and top waters to level up your baiting game.

A simple hobby becomes a lifelong obsession for the majority of people. This article aims to provide essential information about Muskellunge hunting. Try to keep in mind our recommendations above to make your experience more fun and productive!