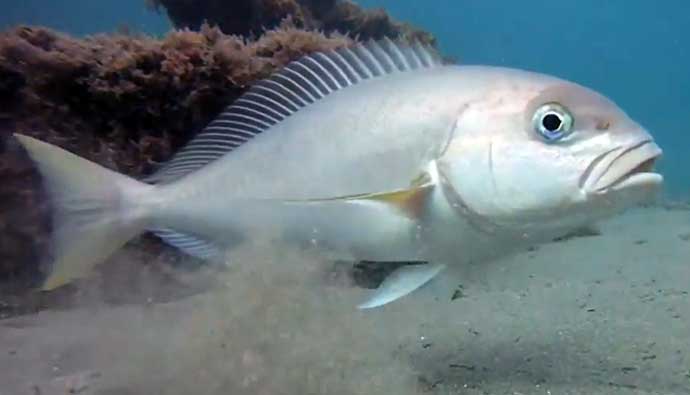 The ocean whitefish isn’t typically a sought-after fish in the sportfishing community. Most of the time they are just nice fish to help fill your catch bag.

I like how they taste, so we’ll cover how to catch them in this guide.

The California whitefish is a species of tilefish that call the Pacific Ocean its home. It is also the name of several species of Atlantic freshwater fish.

The fish can be found along the coast of California but they have also been found north and south of their typical habitat. The conservation status of this fish is ‘least concern’ which means that it is not overfished as such.

How to Catch Whitefish

Don’t let their small size fool you. Whitefish are notoriously aggressive and competitive eaters to boot so expect a number of bites when you are out fishing.

Since they have small mouths, small or medium-sized hooks work best. Since the mouths are quite tough, use the heavy gauge wire variety that you can remove easily rather than lighter ones which can snag easily.

Whitefish are attracted by a wide variety of baits. You can use plastic grubs or a simple squid bait which they love. This also includes pinhead anchovies or you can just cut up larger anchovies to make chunks. You can also use shrimp and pelagic red crabs as bait.

When it comes to rigs, use the dropper if you are a beginner. This gives the fish the extra foot of line to work with so you won’t feel it biting too early and end up setting the hook too fast.

You aren’t done when you manage to reel one or catch one either. Once it’s on deck, the whitefish puts up a vicious fight which makes handling it safely difficult. The gill plate cover has a serrated edge as well so if you aren’t careful, you cut your finger. The best way to hold them is through the eye sockets if you plan to keep the fish.

Even though the whitefish can be caught year-round, some seasons are better than others. The best season for catching ocean whitefish is at the end of winter and into spring.

During this time the water turns cool as the weather turns colder. Since the fish is cold-blooded, they swim closer to the shore and inland to keep warm.

How to Clean Mexican Whitefish

A: Ocean whitefish that live in kelp beds have a bitter taste while others have a mild taste. The meat is flaky and the heads, fin, and skin can be used to make fish stock.

Q: Where can whitefish be found?

A: With a few exceptions, this fish is unique to California but they may swim far upstream and land near British Columbia. Whitefish have also been spotted around the Galapagos Islands but the cold temperature and salt content of the Pacific Ocean is their favorite habitat.

Q: Is whitefish difficult to catch?

A: Ocean whitefish are known for tugging and pulling against the line so you need to put in a lot of effort to keep them from escaping. Even when you reel it in, prepare to run around a bit as it bounces and jiggles violently on deck.

Q: How long do whitefish live?

A: The ocean whitefish matures at 3 to 5 years and it can live for 13 years.

Q: What do whitefish eat?

A: Their diet consists of small invertebrates and fish such as crab, shrimp, squid, anchovies, and even lantern fish.