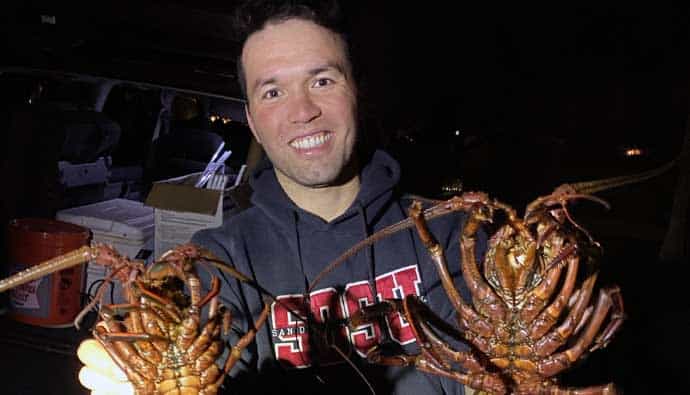 My favorite time of the year is pacific lobster season here in Southern California, especially in San Diego.

Growing in a household that loves lobster, I was shocked that we actually have one of the best-tasting kinds in our own backyard. Catching the spiny lobster isn’t super easy though, especially if you freedive and grab them with your hands as I prefer.

In this guide, we’ll dive into everything you need to know to go out and catch spiny lobsters so you care to share them with your loved ones.

Listen to more tips on the Cast & Spear Podcast

The California spiny lobster doesn’t have claws like a Maine lobster. Instead, they rely on hiding from their predators and using their antennae to produce a sound that scares them away.

Although you can find them from time to time during the day, they are primarily nocturnal creatures. These bugs are omnivores and will eat pretty much anything living or dead. They love to feast on sea urchins which is beneficial for managing their populations.

They are targeted by commercial and recreational fishermen. China is also one of the biggest consumers of commercially caught California rock bugs.

Opening day is a big deal for the Fish and Wildlife rangers, so be careful going out before you’re allowed to. It’s better to wait a bit to know you’re in the season than risk getting slapped with a ticket and fine.

In order to capture the spiny lobster, you’ll need to pick up a report card. You can get this at a sporting good store such as Big 5, Walmart, and a few others. Make sure you call ahead of time before traveling there since they need a special machine to print out the long orange card.

I’ve had buddies who’ve shown up and the machine either wasn’t working or the system is down. That can be annoying.

These report cards are important for the Fish and Wildlife Service to keep track of how many were caught during the season. Prior to going out hunting for spiny lobsters, you’ll need to mark the month, day, location code, and gear code on the card.

Bring the card with you to your dive location and leave it with your spearfishing gear while diving. When you get back to shore or boat and are done hunting for the day then mark how many you caught. Even if you didn’t catch any California spiny lobster, you’ll still need to mark zero.

How to Catch Spiny Lobster

Now that you have your California lobster report card and it’s the spiny lobster bug season, it’s time for you to get your hands on these bugs.

The two most common ways to bring a California spiny lobster home is to hoop net them or grab them by hand while freediving or scuba diving.

When you’re getting started going after California spiny lobsters, you’ll likely come home empty-handed. Don’t get discouraged, it takes time to understand where they like to hang out and how to gather them up. Hopefully, some of these tips will help shorten your learning curve.

The difference between going for California spiny lobsters and say Caribbean lobster is that we’re not allowed to use any tools while diving. That means no tickles sticks, nets, or other contraptions other than our hands.

That’s where the fun begins!

If you want to bring a California spiny lobster to your table, you’ll need to either strap on a scuba tank (make sure you’re PADI certified first) or go at it freediving. If you scuba for spiny lobsters you’ll be able to go into deeper water for longer and typically land bigger bugs.

I spend most of my time freediving for them and generally stay above 45 feet. I have friends who like to dive 60+ feet and they have brought home some huge spiny lobsters. However, the largest California spiny lobster I brought home was around 15 feet so it just depends on where the bugs are at the time of your dive.

Make sure you have a lobster gauge prior to diving. You’ll need to measure along the midline from the rear of the eye socket between the horns to the end of the carapace, which is the last bit of body shell.

If you’re having trouble catching a California spiny lobster, try some of these suggestions:

Hoop nets are popular for those fishermen not looking to get wet much along the California coast. You can buy these nets at your local dive shop or online.

Most of the time you throw in either fish heads, some cans of cat food, and whatever smelly stuff you can find and drop them to the ocean floor. After 15-20 minutes, you hoist them up on your boat and see what you’ve caught.

You can also use these nets from a jetty if you have a long enough pole to get it out there and lift it up. You can also make a hoop net out of a bike rim and a strong mesh bag.

How to Cook Spiny Lobster

Spiny lobster in the sea…it doesn’t get much better than that for fishermen. Now that you’ve scoured the water along the coast and have yourself a fat rock lobster tail, you’re ready to cook it up.

Are there lobsters in the Pacific?

Yes, they are up and down the coast of California and into Baja.

What is the difference between Atlantic and Pacific lobster?

The biggest difference is that Pacific lobsters don’t have claws and they live in the Pacific Ocean.

Can Atlantic lobsters live in the Pacific?

In theory, back in the day in San Diego, Scripps was able to get them to live, but Atlantic lobsters would wipe out Pacific ones.

Where can I catch spiny lobsters in California?

You can find spiny lobsters anywhere along the coast of California as long as it’s not an MPA that’s restricted.