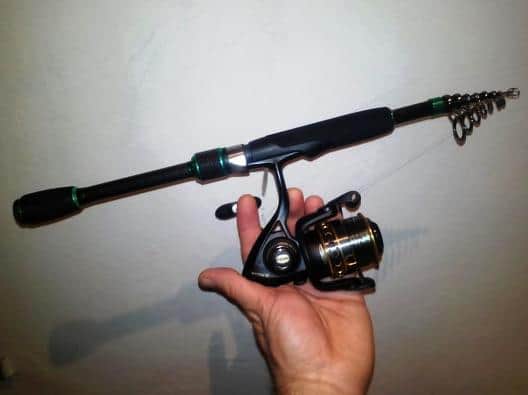 If you’re working on being a serious angler, you will need a reel that can withstand the pressure of a big prize catch without it breaking. The Penn Battle 2 can last you for years and is priced strategically to make it affordable for average anglers.

Considered to be one of the smoothest reels in the market, it is designed to feel comfortable in the hand and offer a smooth retrieve than other reels in the same price range cannot match. 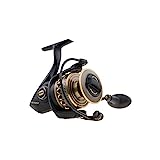 Here are some features that make this reel a must-buy. For more details, check out the Penn Battle 2 page here.

This is important because the bearing impacts the drag system. If these balls get damaged or dirty, the reel’s performance will be affected and may damper your fishing trip.

The HT 100 drag system of Penn Battle 2 uses carbon fiber washers rather than the traditional felt washers standard in most reels. This ensures long-lasting use of the reel. When reeling a fish, you can benefit from the smooth drag this spinning reel provides.

Additionally, the keyed washer increases max drag pressure to about 20%. The carbon fiber drag system is laminated onto fiberglass. The max drag starts at 9 lbs on the 1000 and 30 lbs for the 8000 series.

Some users have reported that the Penn Battle II spinning reel is on the heavier side compared to other reels, but in our opinion, the weight makes for a sturdier reel. It starts at 8 ounces on the 1000 series and can go up to at least 30 ounces on the most extensive series, the 8000 series.

However, remember that while a heavy reel may be sturdy, it can be difficult to cast and use for long periods, so make a choice accordingly.

Unlike its previous model, no regular maintenance is required for the Battle 2 reel. The quality paint it is treated with can withstand the wear and tear of saltwater. However, self-repair is problematic. The anti-reverse reel can be tricky and can come off at times during maintenance.

Additionally, reassembly can also be an issue. The reel is fantastic as long as it is kept dry and avoids wet conditions. If it is infiltrated with saltwater, thorough cleaning and drying of the product, inside and out, should be observed.

However, once it has been disassembled and reassembled, the reel’s performance will not return to its initial functioning capacity.

You will always be mindful of how much line remains on the spool due to the line capacity rings that the Battle 2 features. The spool can also be loaded directly with a braided fishing line without the need for mono due to its rubber inlay.

Just make sure the spool is sufficiently loaded with line and not overloaded, especially when angling for a big catch. You need to know how many lines you have to work with so you don’t end up losing your catch.

The Penn Battle II Spinning Reel has an open face design and is available in eight sizes. The smallest one is 1000, and the largest is 8000. The gear ratio of each of them is medium to high.

The smallest offers 5.2:1, and the largest is 6.2:1, which is not much difference. These versatile gear ratios allow anglers to catch a range of different size fish with ease. 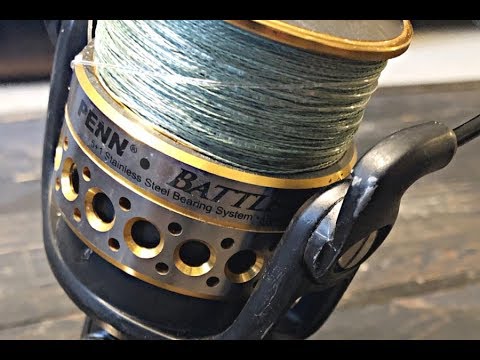 The Penn Battle II 2000 reel has a new and bigger rotor and a bigger spool, bridging the gap between it and the Battle 2 3000 quite nicely. It also balances out quite well on a 7 ft rod. Besides a new addition to the size, the Battle 2 Penn reel has a line capacity ring on the spool, standard on all Penn reels.

Additionally, the drag washers have been keyed into the spool, which means you can use both sides of the drag washers. This is handy in stopping a fish that is heading for cover.

The new Battle 2 reel has sealed bearings that provide an additional layer of protection and a closed system that prevents salt water from getting into the bearing.

Of course, even the best fishing reel will not perform well if not paired with a rod that can support and enhance its performance. By getting the Combo of Penn Battle 2, you would be equipped with a rod and reel combo that no fish can stand a chance against.

Perfect for inshore fishing, the Penn Battle II Combo features a full metal body, side plates, and a rotor for max durability. Tie super lines effortlessly, courtesy of the machined and anodized aluminum Superline Spool, and you won’t even need backing for it.

The super-strong reel boasts an HT-100 drag system, ensuring a smooth drag under large loads. The combo comes with a rod made from a strong graphite composite and guides made from aluminum oxide.

Penn and Daiwa reign supreme for amateur and seasoned anglers in the best spinning reel. But which one should you choose? It all depends on the particular features you are looking for.

The Battle II reels feature stainless steel sealed ball bearings that Daiwa does not, which can be problematic if you are fishing in saltwater. This is mainly why most anglers prefer the former, even if they do not regularly fish out on the ocean.

Better safe than sorry, after all. However, Daiwa boasts a higher spool capacity on the 5000 series.

Daiwa also features an oversized Digigear system for smooth operation and a longer life span. On the other hand, the keyed drag washers in the Penn Battle II reels offer a 20% smoother drag.

The bottom line is that if you prefer form over function, you can go for a Daiwa BG reel. However, if you intend on becoming a serious sports angler who dreams of catching a prize fish, Penn Battle 2 should improve your chances.

Yes. The reel features five stainless steel ball bearings that are sealed to prevent saltwater infiltration. However, it is only partially sealed so that some water may get in. Just make sure you don’t accidentally drop the reel in the water.

Are Penn Reels any good?

Penn fishing reels are considered some of the best ones out there, not only for amateur anglers but also for seasoned veterans due to their robustness. Plus, the brand innovates its reel for each new series it introduces, so you can always look forward to a better reel.

Where are Penn Battle reels made?

The brand currently has headquarters in Spirit Lake in Iowa, but only a few reels are made in the US. Most are manufactured overseas. The brand’s American products originate from a plant in Philadelphia, but cost pressures have forced Penn to look abroad for affordable manufacturing solutions.

The two popular Penn reels made in the US are the Senator and the International. The three popular ones made internationally are the Jig Master, the Power Stick, and the Tuna Stick. However, the ones you choose should depend on your needs.

While this Penn offering is considered one of the best reels you can get, the fishing line you choose will also impact your experience. Plus, even though you may be tempted to load the reel to its total capacity, don’t. (Check out our guide on how to use spinning reels)

You will get wind knots otherwise, and if you are fishing with a quality braided fishing line, the loss may be significant in terms of cost.