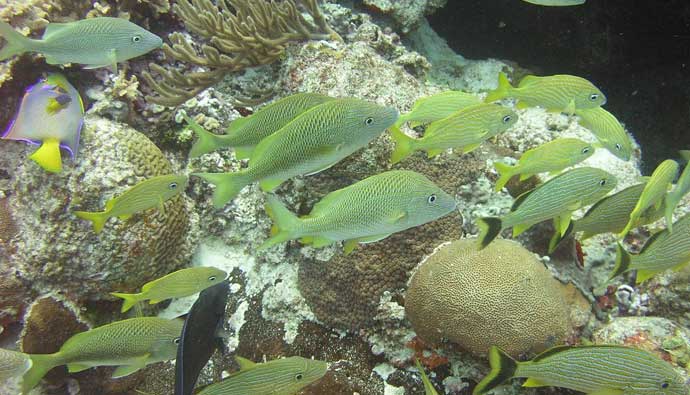 What looks like a pig from the front and swims in the ocean?

This not so much pig-headed fish is caught in large numbers by anglers as bait to catch larger fish. It also makes for a delicious panfish so we’ve included a recipe on how you can cook it up if that’s your jam.

Time to grab your light tackle gear or cane pole and catch this awesome little fish!

This fish can be found in the western Atlantic Ocean ranging from Massachusetts and Bermuda right up to the Gulf of Mexico. Yet, if you want to find a lot of them in one place, head to the Chesapeake Bay rather than tropical waters. This pig faced fish (just kidding) is nocturnal and can be found in coastal waters over mud and sandy bottoms.

It is not an endangered species.

Looking for Pigfish: Where Can You Find Them?

Adult pigfish spawn in the Gulf and the young ones grow up in bays, shoals or grassy areas. That’s where they find their main source of food i.e. small mollusks and crustaceans. Adults can be found in slopes of channels or grassy areas throughout the Gulf as well as around docks and piers.

How to Catch Pigfish

This pig-headed fish stays true to its name – it is difficult to catch but it is well worth the trouble especially if you want to use it as bait. Use a pinfish trap to catch them. Find a nice, shallow and flat surface that is not under more than 4 feet of water, is grassy and has sandy depressions. Drop a trap or two in there and wait for the fish to swim right in.

Place frozen chum in the trap as pigfish bait. When it thaws, the pigfish will be attracted to it. Use either a Sabiki rig or a gold hook that has a split short and a piece of shrimp as bait. If you catch the fish in more than a couple of attempts, that means there are more in the vicinity. If that is the case, throw a cast net in the chum to catch multiple fish at once.

There is a reason why this pig-faced fish is considered to be summer bait. The fish spawns in spring around the end of May during which time it grows to about 2 inches. Yet, it gains another inch by midsummer which is ideal for large and medium size trout.

When they grow bigger by end of summer, they are large enough to be used as bait for larger fish. Besides sea trout, bull redfish and snook will feed on pigfish as it gets even larger in September and October after which it moves out to sea.

How to Clean Pigfish

How to Cook Pigfish

Q: Why is it called pigfish?

A: It’s called a pigfish because of the grunting noises it makes when it is caught and struggling in the water and because of its pig-like snout.

Q: What do pigfish eat?

A: As bottom feeders pigfish forage for crustaceans, small fish and worms along the sandy sea bed.

Q: How big can pigfish grow?

A: The largest length and weight of this fish are 18 inches and 2 pounds. Yet most don’t grow more than 7 to 9 inches in size and weigh no more than half a pound.

It’s the fish that looks like a pig and acts like one too. While the pigfish is not a popular table fish, you can increase your chances of catching bigger fish such as tuna if you use it as bait. Rather than purchasing it, use the tips mentioned in this guide to capture it yourself and use it as a fresh, live bait.

Do you have any tips and tactics for catching this fish? Share in the comments below and do share this guide if you liked it.