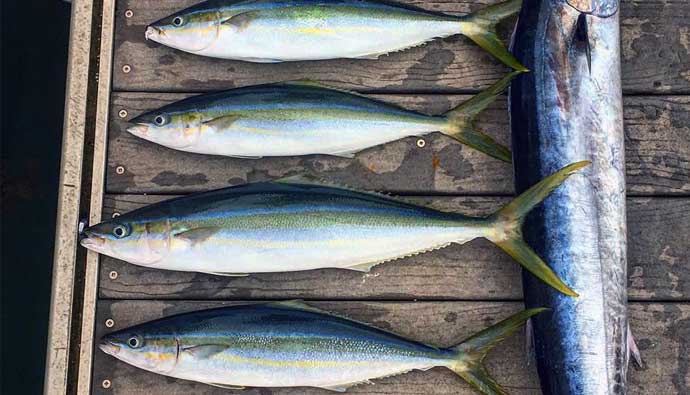 Rainbow runner is a fun fish to catch on light tackle.

If you have the chance to see them being chased by larger fish, they tend to leap out of the water to escape their hungry mouths.

They generally travel in small schools and young ones can often be found trailing sharks.

Get your light tackle gear ready and let’s go catch a few!

Also known as rainbow yellowtail, Hawaiian salmon, and Spanish Jack. Rainbow runners are members of the Jack family along with the blue runner fish, bar jack, and crevalle jack. But they are more slender than their larger cousin the giant trevally. The fish can be found in tropical and subtropical waters across the globe, but most are located in narrow belts in 70 to 80°F temperatures.

The body of the fish is compressed and elongated, and it has a long, pointed head and snout. The eyes are small, and the teeth are arranged on jaws on villiform bands. A fun fact about rainbow fish is that it also has small teeth on the roof of the mouth and on its tongue.

They’re called ‘rainbow’ runners because of their unique vibrant colors.

Spanish jack fish can be found in shoals in deep water rather than in reefs. While some do venture near reefs at times, most stick to deep drop-offs and open water. As a curious fish, it will often swim right up to scuba divers and swim off at high speed if spooked.

Several of these are caught in large quantities by fishermen who are angling for other fish. The smaller ones can be found in schools, but the larger ones usually swim solo making them difficult to find.

It’s common to find them in the Gulf of Mexico around July and August.

How to Catch a Rainbow Runner 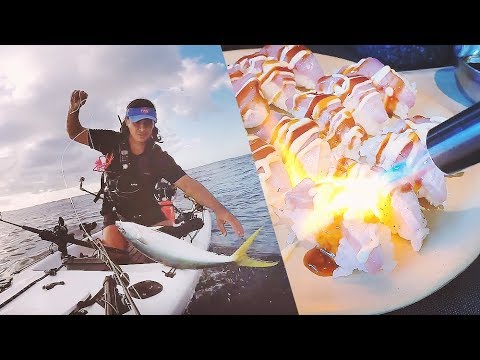 Rainbow runner fishing can be fun if you bring the right gear. The preferable tackle is a medium-heavy spinning outfit with a 30lb braid line, but you can also use heavier tackle in case you want to catch a large one. Plus, you don’t have to use a wire since the fish doesn’t have sharp teeth that can bite through it.

Since the fish is not picky, you can use a range of techniques to catch it, such as live jigs, bait, trolling, and poppers. It eagerly takes live bait such as squid and small fish, which you can catch in the area beforehand.

Commonly this fish is used as bait for billfish and tuna.

Rainbow runner fishing can be done year-round, but the best months are those when the water is about 79 degrees. This temperature is ideal for spawning for this fish, and it will gather in large shoals to take advantage of this.

How to Clean Rainbow Runners

While this fish puts up a good fight, rainbow runners are known to taste delicious. Some foodies consider its taste close to the salmon fish. Tasty.

What do rainbow runner fish eat?

Rainbow runners feed on small fish, cephalopods, and a range of planktonic crustaceans.

How big can a rainbow runner get?

The fish can grow to over a meter in length and can weigh as much as 13 lbs.

Are rainbow runners good to eat?

Yes, they have firm, white flesh, which makes it good table fish.

Rainbow runners are often confused with the kingfish, but it has brilliant green, purple, and blue colors that the kingfish doesn’t have. This includes two bright blue stripes that run down its side.

If you are rainbow runner fishing in Australia, look for it around New South Wales. Particularly, Shark Bay where it can be found in clean ocean currents deep underwater. Even though the fish has medium commercial value, it is still quite fun to catch, making it an excellent sport fish.