If you want to make a non-slip loop at the end of a fishing line, you need to tie a Rapala knot. This will give your fly or lure more action. The name is attributed to the company that popularized it for connecting lures to a mono fishing line, so it is also known as a lure knot or a loop knot for lures. 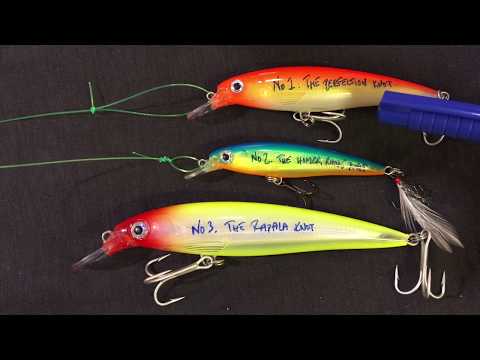 It would help if you learned how to tie an overhand knot first, though. Follow these instructions on how you can include the overhand in the Rapala knot:

Make a loop or loose overhand knot out of your line and thread the tag end of it through the eye of the lure and the loop.

Wrap it around the standing line three times.

Pass the line through the second loop.

Pass the line through the loop you just created.

Pull both ends of the line to tighten the non-slip loop knot, and you have a Rapala knot.

The Rapala knot is one of the more reliable loop knots for the lure you can make if you know how to tie a loop knot. However, this non-slip loop knot can take some time to tie compared to others, and it also leaves a tag end loose, which can get stuck on debris and weeds. Plus, it does not work on braided lines.

The Palomar knot is easier and faster to tie in comparison to the knot Rapala, but it is not as strong with braid as it is with monofilament or a fluorocarbon fishing line. It’s ideal for tying superlines to leaders or lures. Plus, this non-slip knot can retain almost 100% of the line’s original strength. The Rapala knot, on the other hand, cannot handle big fish as well as the Palomar can.

The Rapala knot is quite similar to the Kreh loop knot, but it has an additional twist in it, which gives it more strength in comparison. However, it also leaves a tag end that can snag in weeds and debris. Additionally, it is also quite tricky to tie compared to the Kreh knot.

The Kreh loop knot is stronger in comparison to the Rapala knot, and its tag endpoints downwards towards the lure rather than upwards. This prevents it from snagging in debris and weeds.

Q: Why is tying the Rapala knot difficult?

A: Tying this knot can be a challenge at first because you need to hold both thin lines at the same time when you are making it.

Q: What are some tips to strengthen the Rapala knot?

A: The best tip is to moisten the line to ensure it does not break when you pull to tighten the knot.

Q: Why is the Rapala knot also called an overhand knot?

Q: What is the best knot for crankbaits?

A: The knot Rapala is one of the best ones for crankbaits.

Q: Which knots can be used as alternatives to the Rapala?

A: You can use the Bimini Twist, the Perfection Loop, Spider Hitch, or the Dropper Loop as alternative knots.

Q: What is the most reliable loop knot?

A: The Bimini Twist is one of the strongest ones, but it is also the most difficult knot to tie. It can withstand the pull of a 1,000-pound fish easily. The instructions to tie one are not challenging to follow.

Q: Besides the Rapala, which loop knots are best for fishing?

A: The Kreh knot, Perfection Loop, and the Canoe Man Loop are useful alternative loop knots to the Rapala.

Q: Will a square knot slip?

A: It will slip if it is not under tension and if it is tied with a nylon rope.

YouTube
Articles » Fishing Knots » How to Tie a Rapala Knot