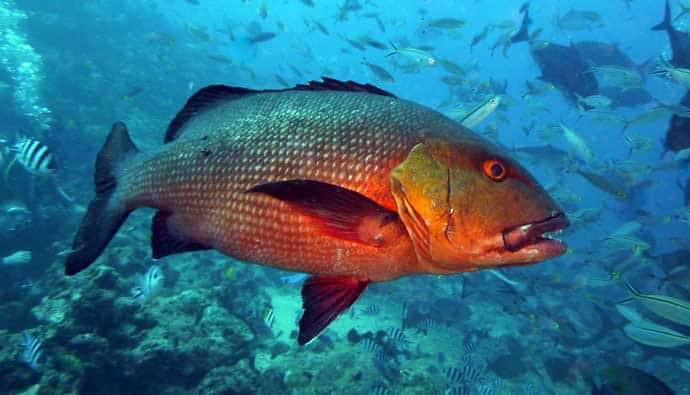 Why is the red bass fish known as the toughest species of fish to catch in the ocean?

Find out the answer to this question and what you can do to increase your chances to catch one successfully.

Sporting a powerful jaw full of razor-sharp teeth and a broad, muscular body and wide tail, the red bass or two-spotted snapper is nothing to sneeze at.

Seconded by only the giant trevally in power, this bass is a sportfish that is worthy of its reputation. The fish can be found in the tropical Indo-Pacific region from East Africa, throughout Asia, and around the Line Islands.

During the day, the body of the two-spotted snapper turns dark brown, and at night, it fades to a pale yellow or red. The fish feeds on other fish, crabs, mollusks, and shrimp and is known for its powerful bite. It’s not a great table fish as consumption can cause, but it is considered a top-notch sport fish because of the fight it puts up when caught.

Also known as channel bass and red fish. The two-spotted snapper fish prefers to remain around coastal islands and isolated mainlands that have little to no human population or traffic.

It can be found 4 to 180 m deep in healthy reefs as well as near drop-offs, shallow coral, and steep ledges. Many can also be found in sheltered bays and lagoons.

How to Catch Red Bass

If you are targeting large Mangrove Red Snapper, you need heavy tackle that has at least a 50 lb braid and a medium-heavy spinning outfit as well. If you are near-shore or shallow reefs, you can make do with smaller ones with a 30 lb braid but not for a two-spotted snapper that is over 50 lbs.

You can use a variety of natural bait to lure the fish, such as mud minnows, shrimp, mullet, menhaden shad, etc. If you prefer artificial bait, use deep-diving ones such as plugs and jigs.

Many lures for red bass resemble those lures for black bass, and all of them look like baitfish. However, plastic swim tails or grubs on jig heads are popular choices.

Lures are better than bait for this fish since it is quite aggressive and likes to chase its prey. If you are using poppers, do not set the hook till you feel it biting, or it may not get hooked. You can also use stickbaits, but make sure that you fish these slower than you would for trevally. Red bass usually strikes when there is a pause.

Red bass fish are highly competitive and will often push each other aside to get at an enticing lure or bait. Use surface poppers to get the adrenaline running as the fish goes crazy trying to get at it. Poppers such as durable bloopers with good hardware are preferable even if the fish is deep underwater. two-spotted snapper will swim up to a popper that is well presented.

two-spotted snapper migrates offshore in winter to deeper water, and during that time, the fish remains on natural and artificial reefs.

During the summer, it swims inshore where it can find plenty of baitfish to feed on. In the fall, it frequents deeper water channels that head to the ocean. These are the biggest ones you can find at this time.

Q: Where can I find a big red bass?

A: You can find big red bass around New Caledonia and the Great Barrier Reef.

Q: Is red bass good for you?

A: The flesh of the red bass can cause ciguatera poisoning when consumed, so it has very little commercial value as a table fish. Yet, its fierce fighting spirit makes it a formidable sport fish.

Q: What is the best time to catch a red bass?

A: Red bass prefers to hunt at nights that have a full moon that makes small fish and baby turtles on the surface of the water visible. Use black nightcrawlers and dark subsurface lures to target the fish at night.

The red bass fish may be notorious as a vicious fighter, but that is what makes it an excellent sport fish. Fish for it early in the morning or late in the evening to increase your chances of hooking one.