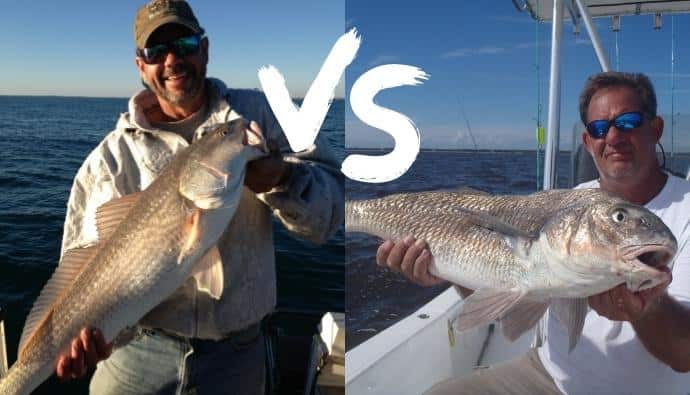 Spanning the gamut from the shores of Texas up the eastern seaboard, Redfish and Black Drum are some of the most popular and targeted members of the Croaker/Drum family.

Though often considered cousins and generally found in the same area, these two fish look and act very different.

From behavior, food preferences, lifecycles, and even techniques, the angle for them, Black Drum and Redfish are two unique species that are an absolute blast to angle for.

Below, we cover the difference between Black Drum and Redfish and how you can successfully angle for each.

Though often referred to by other names such as Red Drum, channel bass, or simply “Reds,” Redfish are easily identifiable from the Black dots near the beginning of their tail and their skin, which has a golden or bronze hue. Anglers may happen upon a spotless Redfish, but this is a rarity.

With a habitat that ranges from the Texas gulf of the Atlantic seaboard up to the shores of Massachusetts, Redfish have a spawning season that begins in mid-August and runs through October.

Notably, the end of September through early October often finds large Red Drum schools migrating from their estuaries and into the Gulf of Mexico.

During the formative years (1-3), Redfish will spend most of their time in days, creeks, or surf zones.

Studies found they will usually live within a 3-mile radius of their original tagging location during this time. However, once they mature, they will exit the bees and make their way into open water, where they will spend most of their lives except for a few returns to spawn.

Once Redfish reach sexual maturity around 3 to 4 years old, they migrate to the ocean alongside their Black drunk cousins and speckled trout.

The male Redfish signifies its desire to meet by vibrating at the swim bladder muscle, producing a sound akin to a Drum. Once spawning is complete, currents will usually bring the larvae, and baby red’s into tidal bays for their juvenile years.

Note: Like most of the Animal Kingdom, female Redfish will only release her eggs when the right call from the suitable mate is uttered. It takes a specific frequency and sound level to determine which would be the right male to fertilize her eggs.

When angling for Redfish, some of the best places to look are in shallow water with submerged vegetation. Seagrass, oyster beds or small reefs are preferred locations, often surrounded by soft mud and structure.

Drawn to coves and points, these creatures prefer piers, jetties, and pilings closer to the beach. During colder weather, creeks, offshoots, and small, shallow ponds will have significant populations of Redfish.

Anglers will often encounter droves of Red Drum in total creeks and rivers during colder months. Though there is no evidence of migration, these Red Drum prefer warmer, shallow water with exposure to the sun during the coldest time of the year.

Large bull Reds can also be encountered during Fall stormy weather from piers and the surf during the annual “Bull Red Run.”

Fishermen will often throw a lure on the water surface while Redfish are feeding. This allows their bait to drift along with the tide, moving in conjunction with natural schools of bait such as shrimp or minnows.

Sight fishing is a famous method anglers use to fish for Red Drum.  Casting in front of and retrieving bait by these predators puts a tangible food source in the path of these Channel Bass.

Often found in shallow water areas, 2-3 feet deep, soaking up the sun during cooler months, Sight fishing can get anglers action when the pickings are slim.

Here, they can feed on crustaceans, shrimps, crabs, and other small bait with their fins and tails jutting from the water surface.

Sight fishing is a style of angling whose success relies upon total currents and time of day. It’s essential to pay close attention to weather patterns and title fluctuations as this can make or break sight fishing for Redfish.

The moment an angler feels the strike, it’s game on. Redfish will give even the most experienced angler a run for their money when the hook is set.

A solid drag and a steady hand must be maintained when angling around the structure to prevent the line from becoming snagged or broken.

Note: Anglers fishing around the structure should use a braided line and a fluorocarbon leader to prevent breaking their line and losing the fish.

When the water temperatures float between 59 to 75°F, Black Drum will spawn from 7 pm-10 pm from January through April.

Females will lay 20 to 30 eggs throughout this period, during which spawning occurs in the early hours of the evening.

Once the eggs are fertilized, they are carried to sea by currents until they hatch. The hatchlings will then move inland into marshes and inlets, where they grow to be puppy Drum.

It takes 4-5 years for a Black Drum to become sexually mature, at which point they begin to spawn in large schools. The schools occur offshore and are comprised of several thousand fish.

The schools often include Redfish, Jack Crevalle, and Cow Nose rays. These schools only occur during spawning season and will rapidly disperse once this is over.

Black Drum have a lifespan of over 40 years, although several have been found to exceed 58 years in age. Anglers can keep five Black Drum per day ranging between 14”-30” with only one exceeding the 30-inch length.

Black Drum are bottom feeders and will consume shrimp, crabs, oysters, and other crustaceans along with cut bait. It’s important to determine what food is in the ecosystem when you’re on the water to increase your chances of successfully snagging a Black Drum.

Though occasionally plastics can work, anglers are more likely to find success with Carolina rigs or other tackle that focuses on the bottom of the water column.

Oftentimes, Black Drum are misidentified as Sheepshead, a species that shares a lot of standard physical traits. However, they are easily identifiable by a few key traits.

On rare occasions, soft plastics can work with a Black Drum. However, angles are much more likely to find success utilizing a Carolina rig or other bottom-centric tackle.

When angling in the surf or deep waterways, a pyramid weight with one or more offset swivels dangling bait into the water will work wonders.

Another option is to utilize a simple hook baited with a shrimp, crab, or pieces of odorous cut bait which will drift throughout the water column and eventually settle where a Black Drum can find it.

These fish are not nearly as aggressive as their Red cousins and require much more finesse and patience when angling for them.

Black Drum: The smellier the bait used, the higher the likelihood of success you will have.

Redfish can be angled throughout the entirety of the water column. Aggressive, hard-hitting, and almost always hungry, Redfish can be found from the water surface to muddy bottoms.

Just like with Black Drum, Carolina rigs or pyramid weights with offset leaders work incredibly well when angling in the surf zone or bottom of the water column.

For both Redfish and Black Drum, the stronger the scent of the beats used, the better off anglers will be.

Redfish hunting in the middle of the water column will chase soft plastics such as colorful scented minnows and shrimp. A single or double rig, often utilizing weighted jig heads and a steady retrieve will drag it right under the Redfish’s nose.

Popping corks also work well when angling in the middle of the water column, providing anglers a demonstrative marker for any strikes while floating both plastics or natural bait at the perfect level.

Finally, topwater lures work well with Redfish in clearer, calm (often shallow) water. Redfish and the ability to pick up the movement of these doors and the color schemes trigger an aggressive predatory response similar to bass striking topwater.

If there are bass in the water, there’s a significant chance you could catch both Redfish and bass off one topwater lure.

These fish are fun to fight and even better to eat from sushi, pan-seared fillets, fish tacos, and fish burgers.

Note: Fried Redfish Tacos are among the best ways to prepare Redfish, combining the rich-tasting fish with lime and tangy coleslaw on a flour taco.

Though they share much of the same ecosystem and bear some resemblance, Redfish and Black Drum are two very unique fish species.

They both taste delicious and are incredibly fun to angle for, but they have their life cycle and way of catching them.

Though Redfish may strike through the entirety of the water column and Black Drum, mainly the bottom, they are fun fish on the end of your line.

You might even catch both on the same rig and bait in the right place and time. As always, good luck and safe out on the water.