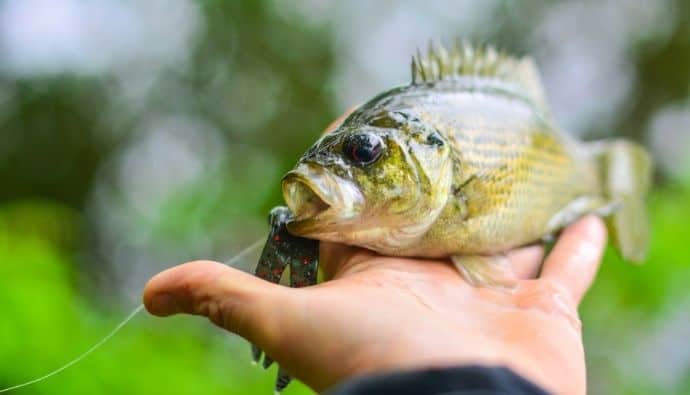 Rock bass fishing can be engaging and thrilling for newbies and expert anglers alike. Considering their size, you may not think of it right away as a prized treasure. Yet, fishing these can be challenging as they tend to be aggressive and territorial.

Is rock bass fishing worth the time and effort? Absolutely!

To catch these species is rewarding, especially for beginners. In addition, fishing rock bass also makes for a delicious meal after fishing on a summer day. So, let’s forget about crappie, perch, or bluegill for now and go for these.

Back to Basics: Facts about Rock Bass

As we give some love to the rock bass, let’s look at some facts about these small but aggressive fish.

Rock Bass: Behind The Name

Rock bass, or Ambloplites ruperstris, belong under the Sunfish family, like smallmouth bass. The name “Ambloplite” describes their shape as akin to a blunt shield. On the other hand, “ruperstris” refers to rocky parts where they are commonly found.

They also have several alternate terminologies. For instance, anglers also identify rock bass as “black perch” due to their dark scales and spots. In addition, due to the red color of their irises, anglers call “red-eye.” Lastly, they also have the nickname “goggle-eye” due to their big eyes.

Common names of this fish also vary according to country. Rock bass in Canada goes by the name “northern rock bass.” Meanwhile, European countries have a significant rock bass population. Thus, anglers here call these fishes in their local languages.

Rock bass is usually 20 to 25 centimeters long. The current highest recorded weight for a captured rock bass is 1.36 kilogram (or 3 pounds). They have 10 to 13 spines attached to the dorsal fin and soft dorsal rays at the rear of the fin around 11 to 13.

Six spines are also present in the fin at the bottom of its body. Overall, they look like a cross between black bass and bluegill.

One exciting feature of the rock bass is its scale color. Dark-spotted scales run at the lateral line and down at its ventral side. The lateral scales’ natural colors are dark green or brown.

However, these can fade into lighter green or yellow on its ventral side. Rock bass fishing anglers may find its scales interesting to see!

Compared to largemouth bass and others, they primarily stay on water’s rocky parts. These include lakes, streams, and small rivers. It makes them capable of shallow diving, can only swim down to 3.94 ft. (1.2 m).

Rock bass is also considered as part of the Panfish species. This makes it related to other types of panfish, such as the Perch and Bluegill. This is also why its scales’ color is similar to known panfish.

You can also catch rock bass on rivers, ponds, even a dock. They usually don’t thrive in areas where water streams fast. Thus, boulders and rocks in a fast stream can help you catch them.

Currently, these species are native in the United States and Southern Canada. They spend time feeding in these locations:

Fishing for rock bass is possible in some countries in Europe. These include England and France, where these fish have also lived since the 1880s.

Prepare your presentation with a small, say, 5 to 6 foot, spinning combo. Go for light or medium-light. Then, use a four to six-pound filament.

Many anglers may find it challenging to catch rock bass. They tend to be scrappy fighters after spotting a fishing intruder. This happens especially when you go rock bass fishing in their spawning season. Male fishes at this time are aggressive as they aim to protect their nest from outside forces.

However, seasoned anglers also find these fish relatively easy to catch. As they are omnivores, they are also not that hard to get caught with living bait.

Nonetheless, there are popular baits and light lures that an angler can get to catch a rock bass. You can cast these in shallow waters such as small rivers and lakes.

Here are some examples of fishing baits, lures, and tackle that can go head-to-head with a black perch.

Live bait is the most popular and classic tool to lure fish. You can attach a crayfish or cricket to a hook. Other species such as wax worms, nightcrawlers, leeches, and crayfish work, too. Then, throw the light line into the surface water.

This fishing bait works well, especially if you want to lure your target and have it bite. I argue that live bait is the best way to catch native rock bass since they eat smaller fish.

This is another popular form of fish bait. They are designed to imitate the motion of animal prey. These lures create a wobbling movement underwater as you’re fishing. Hence, fooling bigger fish by thinking that the bait is natural prey.

Depending on its design, crankbaits may either be lipped or lipless. Some are in small minnows, which are different from typical crankbaits in size and shape. Other lures have parts that make them larger from the fish’s perspective.

Crankbaits are more suitable for deep fish capture than rock bass fishing. However, you can still adjust these baits to make it float on shallow waters where rock bass thrive.

Jerkbaits are similar to crankbaits. They imitate live prey, such as crayfish, grasshoppers, and small fishes. Most anglers use this to make fishes fall for the illusion and eventually catch them.

These are more suitable for fishing in shallow waters as they tend to float more than crankbaits. An angler may choose from either of the following types of jerk baits:

This kind is excellent for catching in the middle of the surface and bottom floor of water.

As the name suggests, this jerk bait tackle floats on the surface water.

Unlike the first two types, this one sinks once in contact with surface water. To change the position of the jerk bait, you can adjust it by jerking the rod or pulling using a fishing reel.

This is for the tackle to either slightly sink or stop it from submerging deep underwater. Jerkbaits are more effective in fishing for bass fish and other species.

Rock bass are small but scrappy fighters that thrive in rocky and shallow lakes, ponds, and rivers. Depending on the conditions, it is essential to choose the best bait or tackle that you can use to lure and capture native rock bass.

You can also try other options like jigs, plugs, and spoons. If you have a plastic trout worm, you can also use it with a split shot rig.