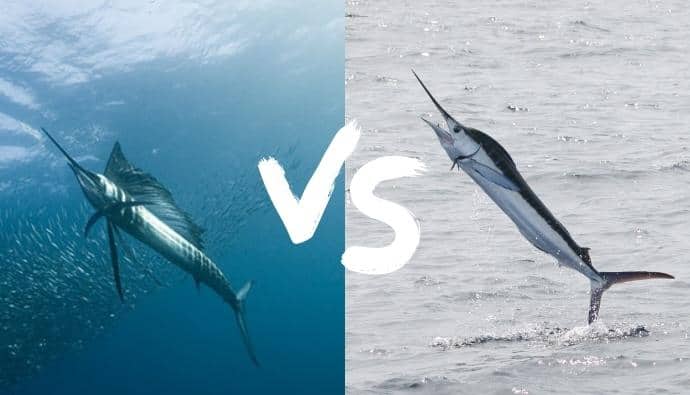 Sailfish and marlin are two of the most popular game fish for experienced billfish anglers in different places around the world.

With both fish species belonging to the billfish family, they certainly share some similarities. They are both large fish that are incredibly strong and fast.

Despite these similarities, sailfish and marlin are quite different, having unique characteristics.

In this article, we will discuss a comparison between sailfish vs marlin, highlighting the key differences between both species.

Billfish can commonly be found in oceans such as the Atlantic Ocean, Pacific Ocean, and the Indian Ocean. The hunting skills of billfish make them stand out as apex pelagic ocean predators.

Sailfish, marlin, and swordfish are prominent members of the billfish family. Other fish species that belong to the family are spearfish. Although their bills is their standout feature, billfish species share other similarities.

Fish in the billfish family are typically very big, fast, acrobatic, and strong, making them excellent choices for sport fishing. They are advanced species with unique features.

Billfish can be found in subtropical and tropical waters all over the world, particularly in places like Australia, the United States of America, and the Gulf of Mexico.

As they reside in deep water, the area around the edge of the continental shelf is a good place to fish them. This is the area where shallow water from land drops into the deep blue abyss that makes up the ocean.

Sailfish are different from marlins in a number of ways. In this section, we will highlight the features and characteristics of sailfish. This will enable us to differentiate between both fish species.

While experts have postulated that there is no difference in the DNA or fin length of both classes of sailfish, their main difference lies in their habitat.

The main difference between sailfish and marlin lies in their appearance.

Sailfish have a flattened body shape, making them laterally compressed. Sailfish commonly grow up to 120 inches in length and weigh between 120 and 200 pounds.

Sailfish are dark blue in color with a silver underbelly. They, however, have chromatophores that allow them to change their color whenever they feel agitated. The chromatophores of sailfish are also useful for breeding and hunting.

Sailfish are unique when it comes to hunting.

They are the only billfish species that are known to hunt in groups. They are very coordinated hunters, which is why they are referred to as the “wolves of the sea .”Sailfish hunt using a method known as herding. They use their sails to herd their prey towards the group before stunning them with their bills.

Sailfish are skilled fighters, using their speed to great effect. They are also very strong but are not as durable as marlin.

Sailfish have the ability to get themselves free whenever they are trapped. They do this by shaking their body vigorously.

You can find sailfish in the Indian, Pacific, and Atlantic oceans. They enjoy staying in warm water temperatures between 70°F and 83°.

Sailfish can be found in the temperate waters of Africa, Costa Rica, Panama, and Florida.

Sailfish feed on flying fish, squid, jacks, mackerel, and tunas. They prefer catching prey that swim near the surface of the water. As such, you can target sailfish closer to shore.

Although marlin and sailfish are both billfish and belong to the Istiophoridae family, they are still different fish species. In this section, we will discuss the features and characteristics of marlin.

Blue marlin, also called Atlantic blue marlin, can be found in the Atlantic, Indian, and Pacific Oceans. They enjoy staying in water temperatures that range from 69° to 95°F. The blue marlin is the largest type of marlin.

As the name suggests, striped marlin have stripes on their body. They are similar to the blue marlin in appearance, with their vertical blue stripes setting them apart. Striped marlin is widely regarded as the most beautiful type of marlin. They can be found in the Indo Pacific oceans. Striped marlin are tough fighters.

White marlin is the smallest type of marlin but is the most agile. They also have the largest dorsal fins of any marlin. White marlin gets their name from the white areas and spots visible on their bellies and sides. White marlin can be found in the Atlantic ocean.

Marlin are typically bigger than sailfish, with the biggest marlin growing up to 14 feet and weighing close to 2000 pounds.

Female marlin are usually bigger than the male ones. Their dorsal fins are shaped like a crest streamlined to their back. This is unlike that of a sailfish, which can be extended. The dorsal fins of marlin have a blueish color.

Unlike sailfish, marlin are solitary hunters who hunt alone. They target their prey by using their bill to slash at them in order to leave them stunned. Marlin relies on their speed and strength to hunt.

Marlin are dogged fighters, and they do not tire easily. As a matter of fact, a marlin can spend several hours going after prey. This is why it is important for anglers to be adequately prepared.

They fight with their bills which is quite dangerous, and use their strength to break free whenever they feel trapped.

Marlin are more migratory than sailfish. They move around a lot, looking for good food and warm habitats.

Marlin enjoy swimming in deeper waters but always stay close to the water surface. You can find them in tropical deep-sea oceans like the Indian, Atlantic, and Pacific oceans.

Marlin has a similar diet to sailfish, as they feed on squid and small fish too. They also go after fresh mackerels, flying fish, and tunas.

Are sailfish and marlin the same?

No, marlin and sailfish are not the same. Both fish species have certain similarities, such as having bills and belonging to the Istiophoridae family. However, they have a few major differences in areas of appearance, habitat, and social behavior.

What is a sailfish related to?

A sailfish is related to marlin as they both belong to the Istiophoridae family. Sailfish are not related to swordfish, as the latter are the sole members of the Xiphiidae family.

Is a marlin faster than a sailfish?

Is sailfish a swordfish?

What’s the difference between a sailfish, a swordfish, and a marlin?

The common features that sailfish, swordfish, and marlin share are their bills and dorsal fins. They are, however, different in a number of ways, such as the structure of their bills and fins. Swordfish also belong to a different family from sailfish and marlin. These billfish species can be found around underwater seamounts, as well as other structures that attract schooling baitfish.

Sailfish and marlin are similar in a lot of ways, and without the right information, you might mix them up.

Proper identification is important for a great fishing experience, which is why we have outlined the differences between these species. Overall, it is crucial always to employ safe fishing practices while baiting billfish.