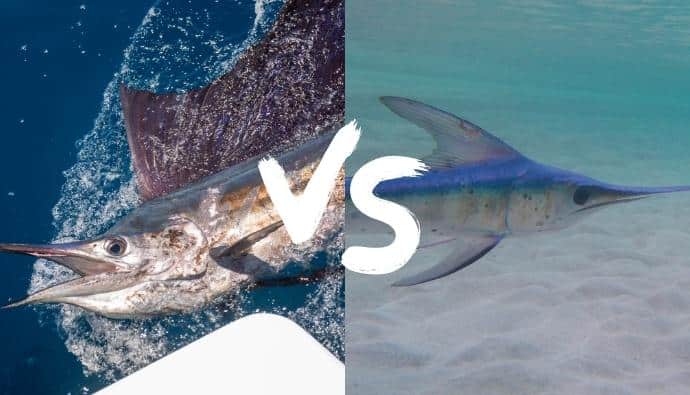 Sailfish vs swordfish ranks highly on the list of fish species that get confused for each other. This is because they are both prized game species with many similarities. Sailfish and swordfish belong to the billfish family and are considered apex predators due to their hunting prowess.

Both fish are also large fish that are good for eating. Despite these similarities, sailfish and swordfish are quite different as they do not even belong to the same family.

In this article, we will discuss sailfish vs. swordfish to highlight the key differences between both species.

Sailfish vs Swordfish: What’s the Difference?

Sailfish and swordfish are two of the sought-after fish in the world. They are both fast and big and can be found in different areas of the world. Also known as broadbills, the scientific name for swordfish is Xiphias gladius.

The main difference between swordfish and sailfish can be found in their appearance. This makes it a major talking point in sailfish vs swordfish.

While they are both large in size, there are certain dissimilarities in the body structures of swordfish and sailfish. The difference in their appearance can be broken down to shape and size, fins, and unique features.

On the other hand, the average swordfish typically weigh about 220 pounds, with the pacific swordfish weighing over 1400 pounds.

If you come across a juvenile swordfish or sailfish, it might be hard to tell them apart from their size. This is because the difference in size is barely noticeable at this point. It is, therefore, best to look at their dorsal fins to tell them apart in such a case.

Swordfish has a slim dorsal fin that is shaped like a crescent located near their head with a smaller one near their tail stem.

When extended, the dorsal fin of a sailfish becomes wider than its body, resembling a sail. If you have not guessed it yet, this is why they are called sailfish.

In addition to their dorsal fins, sailfish have pelvic fins that are shaped like rods. Unlike sailfish, swordfish lack a pelvic fin. Instead, they have a keel on their tail stem.

Swordfish and sailfish can be found in temperate oceans like the Pacific Ocean, Indian Ocean, and the Atlantic Ocean.

In terms of availability, swordfish and sailfish are fairly widespread species. The two fish are pelagic fish that swim throughout the water column but stay away from the bottom of the sea. Swordfish can cope with a wider range of temperatures compared to sailfish. Sailfish typically stay in waters with temperatures between 70°F and 83°F. Swordfish are known to swim in waters temperatures ranging from 41°F to 81°F.

The reason why swordfish can cope in extremely cold waters is because of an organ near their eyes that heats up their brain and eyes to withstand the cold temperature.

In terms of their social behavior, swordfish can be described as solitary as they usually swim alone. At times when they swim together, they swim in loose groups with a wide distance between them.

Sailfish move in schools, especially whenever they are hunting. One common method that sailfish use when hunting is herding, using their sail to herd the fish or squid towards the group before catching them.

Coloration is another important element when comparing sailfish vs swordfish.

Swordfish are usually black, brown, or gray with a yellow or gray underbelly, while sailfish are dark blue with a silver underbelly. Vertical rows of golden spots can be seen on the sides of adult sailfish. Sailfish have chromatophores, allowing them to change their colors for hunting and breeding purposes.

Swordfish and sailfish are most popular as prized games for recreational anglers, but they are still caught for their meat. Swordfish meat is soft and has a high-fat content. Sailfish do not have a consistent flavor, as some are mild while others have a strong fishy taste.

In this section, we will provide accurate answers to some of the frequently asked questions about sailfish vs swordfish.

Are Swordfish and Marlin the Same Fish?

No, swordfish and marlin are not the same fish. They are both billfish and are closely related but do not belong to the same family. Swordfish is the only species in the Xiphiidae family, while marlin is a member of the Istiophoridae family.

What is a Sailfish Related To?

Sailfish is a billfish that belongs to the Istiophoridae family, making them closely related to marlin.

Are Swordfish The Fastest Fish?

Can Sailfish Be Eaten?

Yes, sailfish are edible fish that can be used in a lot of recipes. Sailfish can be baked or fried and is great for making kebabs, grilled steaks, and stir-fries.

What is Faster Than A Swordfish?

Sailfish and black marlin are two fish species that are faster than swordfish.

Which is Faster, Sailfish or Swordfish?

A sailfish is faster than a swordfish. As a matter of fact, sailfish are commonly regarded as the fastest fish in the ocean, with a speed of 110 kilometers per hour.

What Is The Difference Between a Sailfish, a Swordfish, and a Marlin?

Sailfish, swordfish, and marlin are all predatory fish that come with bills. However, they have differences in certain areas, which include their size, shape, dorsal fins as well as lifespan.

Sailfish and swordfish are two of the best billfish for any angler to catch. It is, however, important to be able to identify them in order to handle your catch properly.

Swordfish tend to be bigger while sailfish are faster, with their shape and dorsal fin also distinguishing them. It is best to fish on the open ocean, as you need a permit for federal waters.