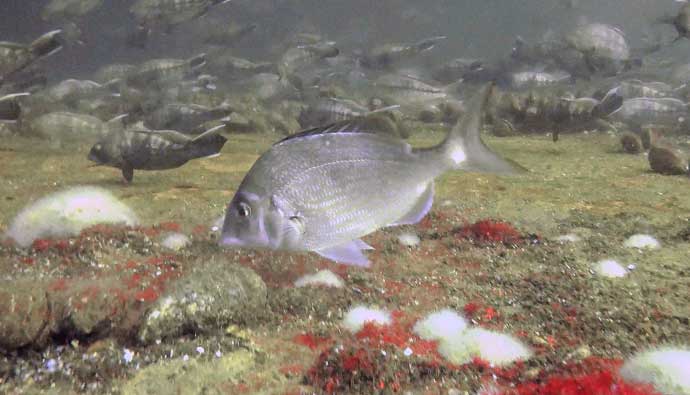 Scup, or how they are usually called, a porgy, are a fun fish to catch and bring home for dinner.

Commercial and recreational fishermen have been told for what feels like generations that this fish is boney and doesn’t make for good table fare. However, if you have had a chance to fillet one, you’ll see that they don’t have a crazy amount of bones that would make them not good to eat.

It’s not uncommon if you’re up in Rhode Island going after striped bass to be able to catch a for scup on the side for a quick catch and cook.

With that being said, let’s figure out the best way to catch some good size ones for you to bring home!

Also known as porgy, scup is known for its fine flavor and the intense way it goes for the bait. A lean and tall fish, it is silvery in color and has light blue specks as well as horizontal stripes. They occur primarily in the Atlantic from Massachusetts to South Carolina. Scup can live up to 14 years and can grow as large as 18 inches.

Scup is a benthic feeder that consumes small crustaceans, worms, small squid, insect larvae, sand dollars, zooplankton, and smaller fish. It is often used as live bait for targeting larger scup, but it is usually caught to be eaten because of its delicious flesh. It is often called panfish because of its light flavor.

When it comes to the scup spawn, they do so along the inner continental shelf. Once the eggs hatch, the scup spawn tend to move to inshore waters along the coast. They are relatively quick to mature and only take two to three years to reach maturity.

If you’re going to try and catch them from shore you’ll need to wait for the water temperatures to warm up as that’s when they migrate nearer to the coast.

Scup is related to the sheepshead, which we’ve covered in-depth in another guide. Back in 1929, scup was one of the most abundant fish. The most common predators of scup are black sea bass, striped bass, and bluefish.

Adult scup lives in areas that have smooth and rocky bottoms around piers, rocks, mussel beds, offshore ledges, and jetties. Smaller ones can be found in shallow waters, and both move into harbors and along sandy beaches during high tides and to deeper channels during low tide.

However, due to overfishing and habitat loss, the fish has reached dangerously low numbers and may be more difficult to find now.

How to Catch Scup

Scup or porgy fishing can be tricky, but with the right gear, you can fish for them more efficiently. A simple 6 to 7 ft long lightweight rod will do. A lot of bait and a ton of smelly chum will attract the fish in droves near your boat. The fishing rod should be flexible enough to ensure that the scup doesn’t tear out its lips, and you can feel light bites at the same time.

Since scup is a bottom feeder, use a reel that can hold enough line to reach the bottom of the body of water you are fishing in. Plus, use a 14 to 20 lb fused line since these are resistant to abrasions and will not knot in the wind easily. A fluorocarbon leader that is at least 4 ft long and can withstand 30 lbs in weight will also make a great addition to your porgy fishing gear.

The easiest way to catch porgy is with a dropper loop, a single hook, and just enough weight to get your rig to the bottom without the current taking it.

Tip your hook with either a Berkley Gulp! Waxie or some live or cut bait and you should be getting bites if you’re over a porgy hotspot.

Since they aren’t heavy fish and only get to an average of a few pounds, they can be caught on lighter tackle. Therefore, you can use whichever saltwater rod and reel you feel comfortable with. If you want a more sensitive bite detection, throw on some braided fishing line, otherwise, you’ll be fine using some monofilament. If you’re a beginner, we always recommend that you start with mono just because it tends to be easier since braid can be finicky. We’d rather see you fish!

Scup is abundant in areas where the water temperature is just right for them. Typically, you won’t find the porgy in water that is under 45° but can find them in waters that are about 55° to 77°. Scup migrate inshore waters during spring and summer and offshore waters to the south during fall and winter.

When it comes to cleaning a scup, you’ll approach it like any other fish. The only added step to making your life easier is that once you’ve filleted the scup, you’ll cut out the bones in the center of the fillet before cooking it.

For scup, treat them like you would any other panfish. They have delicious white meat that can be fried, grilled, smoked, or whichever method you prefer. To improve the porgy fish taste, you can cut out the blood meat to remove some of the fishy taste, but overall, they are great if you’re looking to make a small meal.

Are scup good to eat?

Yes. Treat them like any other panfish you catch. They can be fried, grilled, smoke, and more.

How do you cook scup?

Cook them like any other panfish you catch. They can be fried, grilled, smoke, and more.

Porgy such as scup have white and tender meat that has large flakes and is mild/sweet in flavor. It has often been compared with snapper for its taste.

How can I ensure that the scup tastes great when it is cooked?

Even though scup doesn’t spoil as quickly as other fish, the meat can degrade in taste with time. Prevent that from happening by cleaning and icing your catch immediately.

How many species of porgy are there?

There are over 15 species of porgy available in the Atlantic.

Are scup and Porgy the same?

Yes. A scup is often called a Porgy, which it’s a member of that family.

Scup may not look intimidating, but it can be difficult to catch if you tend to set the hook fast. Practice patience, and you will come home with a large catch.

With that being said, scup is one of the easier fish to catch as long as they’re around. Whether you’re in New Jersey, New York, Rhode Island, or up and down the East Coast, they are worth going after. Take a break from catching all of that striped bass and give scup a shot.

Drop some bait down and you’re sure to lock up on one.

The scup fishery seems to be in good standing so you shouldn’t be afraid to take a few homes to the family. They are said to be in high populations around Massachusetts and other parts of New England.

Unfortunately, it’s not as clear how the scup fishery population is doing down in the South Atlantic. Hopefully, more research dollars can go towards improving our understanding of the scup fishery down there.