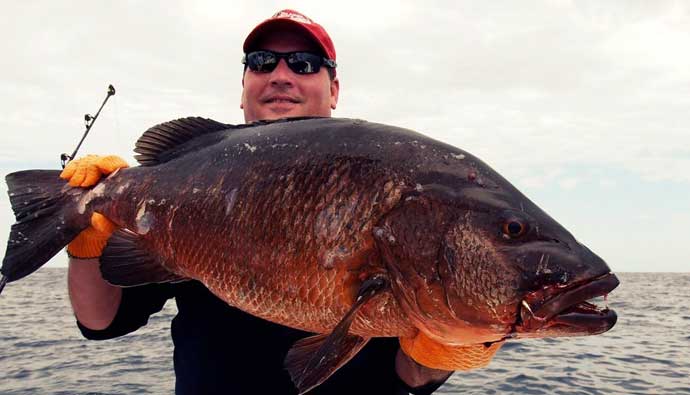 There are so many snapper names it’s hard to keep track. With more than 100 different kinds of snappers. The snapper is a prized game fish that’s highly sought after.

These are members of the large Lutjanidae family of fish. Find them in tropical-subtropical waters in the Indian, Atlantic, and Pacific Oceans.

If you want to learn how to catch snapper and other tips you need to learn about the common species you can encounter first. Here are the different snapper names you should know about:

Size – Even though cubera snapper usually weighs about 40 pounds, some can grow to about 100 pounds and grow to be about 4 or more feet long.

Habitat – Adult cubera can be found offshore amidst reefs, ledges, wrecks and rocky bottoms. Young ones can enter freshwater or mangrove areas as well as grass beds. This snapper is solitary and can be found swimming 60 feet underwater.

Fishing tips – Bottom fishing methods are popular with anglers who want to catch this snapper. Fish for them in wrecks with heavy tackle and using bait such as lobster to attract them. Strikes may be light but the cubera snapper can hide fast so you need to be just as quick.

Check out our guide for more information on how to catch Cubera snapper.

Location – Gray snapper can be found in the western Atlantic and from Massachusetts to Rio de Janeiro. It also occurs throughout the Caribbean all the way to Bermuda.

Identification – Gray snapper colors range from dark gray or brown to gray/green. The belly is sometimes tinged with red and some have orange spots running down the lower sides. A horizontal line runs from the lip through the eye while the tail has a dark margin. It has two canine teeth at the front of the upper jaw and the tooth patch is triangular in shape.

Size – Gray snapper only grow to weigh about a pound but offshore ones can weigh up to 10 pounds and 35 inches in length.

Habitat – Adult gray snapper can be found inshore over smooth bottom such as estuaries, mangroves and in meadows of seagrass. Some may also be found offshore over coral reefs and besides rocky outcroppings and shipwrecks.

Fishing tips – This species is caught by bottom fishing methods over uneven terrain. Anglers use electric and manual reels, heavy monofilament lines and sturdy boat rods to hunt for this snapper. Bait is usually live such as clams and shrimp.

Location – Lane snapper can be found in the tropical western Atlantic from North Carolina to southeastern Brazil. This snapper species lives in large numbers in the Antilles and on the northern coast of South America.

Identification – Lane snappers are reddish to silvery pink in color and they have pinks and yellow stripes on the sides. Some may have a green tinge on the back and sides along with dark bands. The fins are yellow in color but the dorsal and tail ones are red. Its tooth patch is shaped like an anchor.

Size – Lane fish usually do not grow large enough to weigh more than a pound and they grow to about 12 – 15 inches long at most.

Habitat – This snapper prefers to live in coral reefs as well as sandy sea bottoms that have plenty of vegetation to hide in. Young ones remain in grass beds or in shallow reefs whereas adult lanes can be found offshore in larger reefs.

Fishing tips – Lane snapper can usually be found in shallow water so it is usually caught with baited traps and beach seines. You can also use a hook and line to catch them but be ready to withstand a fight when you are lane snapper fishing.

Location – Yellowtails can be found in the tropical western Atlantic around Massachusetts, Bermuda and all the way to Mexico.

Identification – This snapper has a yellow streamlined body that is grayish above and silvery-white below. As per its namesake, it has yellowish stripes across its belly. Also, it has a vibrant yellow stripe which starts from the mouth through the eye and all the way to the tail.

Size – Yellowtails usually grow about 2 feet in length at most and weigh up to 3 – 5 pounds as adults.

Habitat – This snapper can be found swimming in tropical coastal waters about 10 to 300 feet underwater around coral reefs. Young ones can be found over grass beds inshore.

Fishing tips – Most anglers use cut-up fish and squid as bait to attract yellowtail snappers and fish on the bottom from bridges and piers. If you are fishing offshore, use chum to attract school. Use a medium action spinning rod to catch these.

A: Lane snapper has delicate which tastes as mild as it looks.

Q: How do you catch lane snapper?

A: Lane snapper can be found in shallow water so catch it using baited traps and beach seines. You can also use a hook and line to catch this fish but be ready to withstand a fight.

A: The firm flesh of the silk snapper has a nutty and sweet flavor.

Q: How big do mangrove snapper have to be?

A: Another snapper names you should know is the Mangrove snapper. They should be caught when they are about 8 to 14 inches long.

The snapper is a popular fish with anglers not because it is a challenge to catch but also because of its sheer variety. If you remain inshore, chances are you will only find young snappers.

Use them to hone your fishing skills before heading out to sea for the bigger ones.

There are so many snapper names it can be hard to keep track if you don’t study up.

Do you have any tips and guidelines about how to catch this fish? Answer in the comments below and do share this guide if you liked it.