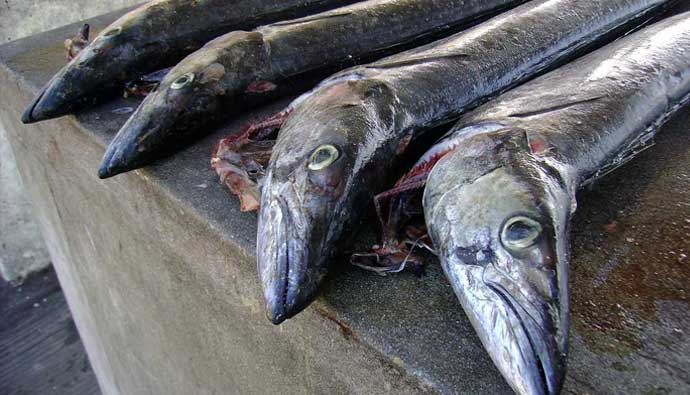 The snoek fish or cape snoek is a fast schooling fish that’s often caught as bycatch in offshore waters. It is a long and thin species of snake mackerel that lives in the seas that span the Southern Hemisphere and can grow up to an impressive 2 m in length.

It is known as the barracouta in Western Australia, and it is called the sierra in Chile and Argentina.

The fish has a long, narrow, and scaly body that is steely blue above and bright silver, and it has black dorsal and pectoral fins. It also has 3 to 4 large teeth at the front of the mouth and several rows of smaller, triangular teeth that can make short work of soft bait and lures.

You can find the snoek fish near continental shelves or around islands feeding on cephalopods and small fish. The fish tend to remain in small schools at the bottom or midwater, and some come up to the surface at night. You can find large numbers of this species of fish in seawater that is between 55°F and 64°F.

How to Catch Snoek

Snoek or barracouta fish are fast and are known for putting up a fight, so you need a relatively heavy outfit. A medium weight rod and reel combo that can work to catch snapper will also work for this fish but set up with a rig that has a sturdy trace line to prevent bust offs.

If you want to use lures, go for metal ones since these can withstand the sharp bite that this species is known for and is shiny enough to entice the fish. Work the lures to make them seem like injured baitfish, and you can attract a whole school of snoek. If you can afford it, go for a pike for your bait. The fish is more robust than pilchard and will remain on the hook longer.

Snoek is usually found deep underwater, so you must ensure that the spinner you use gets to that depth as quickly as possible. You can cast out from the boat and let it sink in before retrieving, but you may have to do a few of these to land on your target.

Once you are sure that the spinner has reached the target depth, start reeling it back to the boat, but make sure you vary the speed. The fish may prefer a fast retrieve some days and bite on a slow one in others. Vary the retrieve so you can find out what works best on a particular day.

Snoek fish can be found year-round in New Zealand, but it feeds intensively during February and March, and the season peaks in April. After that, their numbers decline till October through November when the fish retreats to deep offshore waters. Their numbers increase again once they return to the surface in December.

Why is snoek not an excellent table fish?

While the feisty fish is fun to catch, it is often thrown back by anglers. That’s because it is filled with tiny bones that can be difficult to remove, and many are infected with parasitic worms. Plus, some are also infested with a microscopic Protozoan parasite that turns its flesh mushy and unpalatable.

What should I do when I catch a snoek?

The fish sheds scales and bleeds heavily when it is reeled in, so use a dehooker to release it over water.

What are the other names for snoek fish?

Snoek is also called barracouta or couta, especially around Australia and New Zealand.

How large can snoek get?

This fish can grow as large as 2 m in length, but it is quite light in weight. Most don’t weigh more than 1.7 or 3 lbs.

Where can I find baby snoek?

Snoek eggs are small and transparent. Fry can be found in bays and estuaries and tend to grow fast.

Snoek is known for its voracious appetite and the fact that they can be found in large numbers, which can be frustrating if you are fishing for other species. However, that is what makes them fun and easy to catch, especially for novice anglers. Just make sure that you handle them carefully so you can avoid injuries.

The schooling behavior of this fish may seem irrational at first, so don’t be afraid to take your time and understand where you should drop a line.