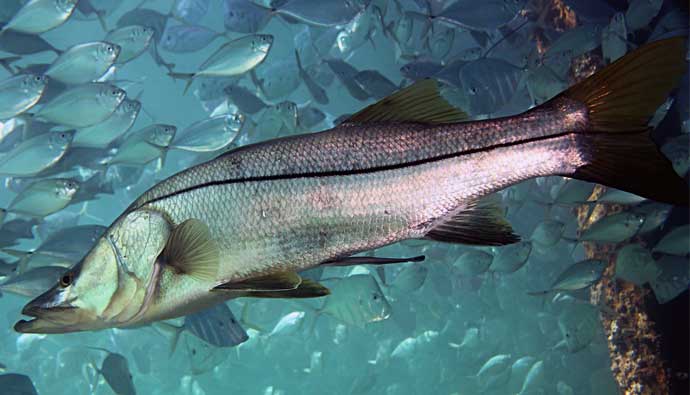 What is a snook fish and how can you catch it?

We’ll cover why snook fishing is so popular in Texas and other parts of the US. This wily game fish can be found in both fresh and saltwater and tricky as heck to catch.

Also known as robalo fish, snook can be found in both the Atlantic and Pacific sides of North and South America living in mangroves, docks, and bridges.

Snook has a prominent black lateral line that runs along the body, a lower protruding jaw, and a sloping forehead. Snook fish don’t have teeth but their sharp gill plates can injure you if you are not careful.

The fish is an opportunistic predator and as it increases in size it targets larger prey. Some can even turn on juveniles during the winter when food is scarce.

If you are snook fishing, look for the fish around submerged trees and other debris. You will find cruising summer snook along shorelines, but they can also be found along jetties and piers.

In inshore waters, look for snook in:

How to Catch Snook

Use a light saltwater spinning or baitcasting setup, but make sure that the braid can withstand 30 lbs. The fluorocarbon leader you use should be able to pass a 15 lb for the smaller snook to a 40 lb test if you are fishing for giant snook.

The best snook lures are bucktail jigs that come attached with plastic tails. You can also use soft plastic lures like DOA Shrimp and Jerk Shads as well as several types of topwater plugs. The plugs will come in handy if you are fishing in low light such as early morning or twilight.

Spearfishing this Fish is 100% Illegal!!!

In Florida, snook season starts in March and closes in April, and then opens again in September and closes in November. If you have a fishing license and a snook stamp (snook permit) you can keep more than one fish a day as long as it is between 28 and 32 inches.

How to Clean Snook

How to Cook Snook Fish

Q: Are snook good to eat?

A: While cooking snook, remove the skin or it will have a soapy taste. The meat is heavier than a trout’s but lighter than swordfish. It is delicious when cooked.

Q: Is Snook illegal to catch?

A: There are strict regulations for the recreational fishing of this fish in Florida. You have to have a snook permit as well as a saltwater fishing license to be allowed to catch it. It is illegal for anyone to kill, harvest or sell snook.

Q: Where are snook located?

A: Snook can be found in both the Atlantic and Pacific sides of North and South America, living around submerged mangroves, docks, and bridges

Q: Is snook a saltwater or freshwater fish?

A: Both. Snook often travel upriver into freshwater sources and when they are in saltwater they are never far from freshwater and vice versa.

Before heading out on a snook fishing trip to Florida, make sure that you have all the required permits that are mentioned in this guide. You can only catch one per day if you don’t have either of these so be prepared.

If you have tips and strategies that worked for you in catching this fish please do share in the comments.