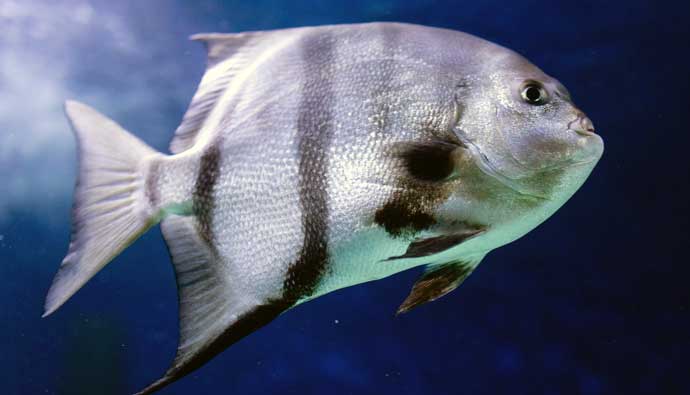 The spadefish is a fun sport fish to target due to its powerful fighting abilities. They’re hard to miss with their beautiful black vertical bars on the side.

They are especially good on the grill or smoker.

The spade fish is known for forming schools that are almost 500 strong and for its vicious fighting spirit when it gets caught. The Atlantic spadefish is more popular with anglers because of this and because of its impressive size. Many can grow to an impressive 36 inches in length and weigh 20 pounds.

It can be found in the waters of Western Atlantic, in Bermuda and the eastern coast of Brazil.

This schooling fish is abundant in shallow marine and brackish waters in and around harbors, shipwrecks, beaches, and mangroves. Juveniles can be found in very shallow water swimming at an angle to disguise themselves as dead leaves or mangrove pods.

The Atlantic spadefish chaetodipterus faber are known for being strong fighters. You will need a sturdy outfit to handle them. A 15 to 20-pound test line with a 30-pound leader should do the trick but use a small circle hook. If you are using bait, use small strips of jellyfish, clams, and shrimp to attract a school.

If you can’t find the fish on the surface of the water, just make a spadefish rig. Just take a rigging needle, pull your fishing line through some jelly balls, and secure it to a heavy 12-ounce sinker. Lower it slowly to the bottom and retrieve it at the same pace to attract a whole school to the surface.

Spadefish spawn between May and September as well as other times of the year, so the fish is available year-round. You can find huge spawning schools around wrecks and wrecks from May till summer 35 to 55 under the surface.

A: Yes, the fish has firm and flaky meat that makes it a great table fish.

Q: What do spadefish eat?

A: Spadefish feed on small benthic invertebrates, which include mollusks, crustaceans, annelids, and cnidarians. The fish also feeds on plankton.

Q: How to big do spadefish get?

Q: How many spadefish can be found in a single school?

A: A single school can contain over 500 adult spadefish. Juveniles can be found in shallow water swimming sideways to mimic leaves and fool predators.

Throw chum in the water when you see some swimming near the surface and watch more scramble to the surface! Just make sure that your hook is hidden with bait so as not to put off the fish from biting.