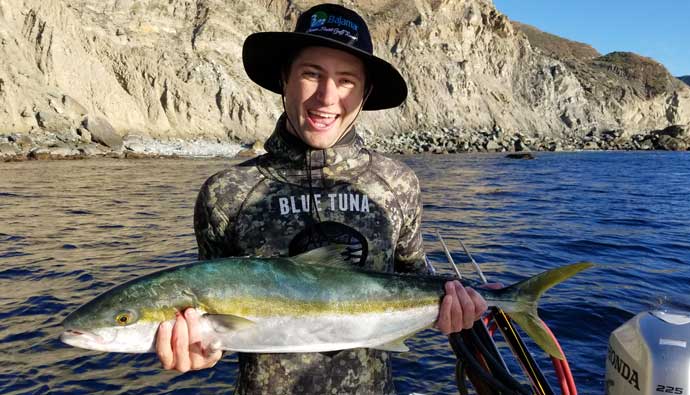 It is essential to know and understand how fish behave and what the size limits are of any particular fish you are hunting, especially while spearfishing California waters.

If you understand where to look and what their habits are, you have a better chance of finding them. Once you start thinking like a fish, you’ll automatically start seeing more fish and significantly improve your chances of becoming a better spearfisherman or spearfisher woman (we’ll stick with spearo for article simplicity).

Also, the more relaxed you are, you will see more fish. These are all vital first steps to becoming a successful spearo.

It is essential to have some knowledge of the different kinds of fish, their size limits, and the daily limits before undertaking any spearfishing (or fishing). It is the responsibility of the spearo to know these rules. If Fish and Wildlife catch you with under-sized or over-limit fish, you could be facing a hefty fine, and you could even risk having your gear and your fish confiscated.

Below is a list of fish that a beginner spearo might target in the first or second year of spearfishing. Please keep in mind that anything having to do with rules or laws in this list are pertaining only to the Fish and Wildlife Rules (regulations) of California.

The daily limit for the state of California for the total amount of fish caught or speared is twenty-fish per day is 20 fish and no more than ten species of each.

Rubberlip Perch can grow to four pounds. Find them from Mendocino County to Southern Baja, California. They are the most massive surf perches off the California Coast. They prefer rocky areas and kelp beds. These fish usually are in schools, so you might be able to get more than one fish out of each school.

Pile Perch can grow up to three pounds. They can be found off rocky shores and around kelp beds. These fish usually are in schools, so you might be able to get more than one fish out of each school.

California Corbina can grow up the eight pounds. Small groups of these species travel along the bottom of the sandy beaches in shallow bays. When there is not much surf, and the sandy beaches are definite, this is the best time to hunt this fish.

Black Croaker grows up to two pounds. Find them along the open coast and sloughs south of Point Conception in California. Adults are often found in rocky areas, as well as in caves and dark crevices. However, they may also be in sandy areas.

Spotfin Croaker grows up to fourteen pounds. They are found most commonly south of the Los Angeles Harbor. They live along beaches and in bays, over bottoms, varying from coarse sand to heavy mud. The depths vary from four feet to fifty feet.

For a more detailed guide, check out our How to Catch Yellowfin Croaker Fish Guide.

For more information on How to Catch California Halibut.

Sargo grows up to four pounds. They’re found from Santa Cruz to the Southern California border. They are in bays and close to shore. The Sargo’s preferred habitat includes rocky areas and sometimes near sand and submerged structures. They tend to be schooling fish.

For more information on How to Catch Sargo.

For more information on How to Catch Kelp Bass.

An interesting side note about the Sheephead is that they start female, and when the big male is taken off the reef by spearo, fishers, or old age, the next biggest female turns into a male. It is also worth noting that a 25-pound Sheephead is approximately 55 years old.

For more information on How to Catch California Sheephead.

Opaleye can grow up to six to eight pounds. Located from San Francisco Bay to Southern California. They reside near rocky shorelines and kelp beds, and shallow waters.

For more information on How to Catch Opaleyes.

They can be found in shallow water when they are spawning. They prefer colder water.

For more information on How to Catch Lingcod.

They can be found anywhere along the California Coast, where there are rugged rocks and kelp beds. This popular fish is found in Central and Northern California (they prefer colder water).

For more information on How to Catch Cabezon.

They can grow up to five pounds. They are primarily Southern California fish. They are particularly common around the Channel Islands and Catalina Island over shallow rocky areas near kelp beds. However, they’re in waters from 4 to 65 feet. They are also relatively easy fish to spear.

For more information on How to Catch Halfmoon Fish.

They are found state-wide off the California Coast. However, they are seldom seen north of the San Francisco Bay.

White sea bass usually travels in schools over rocky bottoms and through kelp beds. This is a fish that is more appropriate for an advanced spearo to go after.

For a more detailed guide, check out our How to Catch White Sea Bass Guide.

Ocean Whitefish grow up to 40 inches. They have been caught from Fort Bragg to the Southern California Coast. However, they are rarely seen north of Point Conception. They prefer rocky bottoms and a kelp forest habitat in shallow areas.

Loosely aggregated schools of adults are often found in depths of 10 to 65 feet. The adults swim a few feet above the bottom, dropping down occasionally to the substrate to search for food. They are more abundant around offshore islands and banks than along the mainland coast.

They are usually found south of Point Conception. However, they may range much further north, especially during warm water events such as El Nino. It prefers the upper water layers, from the surface to the depths of 60 feet.

Pacific Bonito can grow to 25 pounds. They range throughout California state waters, but they are most prevalent south of Point Conception. Sometimes, they arrive off California when the ocean warms in the Spring. However, they may never show up if the conditions dictate colder than average water temperatures.

This is an excellent eating fish. Make sure you bleed it after it’s caught and keep it cool.

For more information on How to Catch Bonito.

Yellowtail can grow up to 87 pounds. They are found state-wide off of California, but most game fish are taken south of Point Conception.

They can be seen from the surface to at least 200 feet. Prime Yellowtail areas are La Jolla kelp beds, Oceanside and Dana Point, the Horseshoe Kelp, Palos Verdes Peninsula, Catalina Island, and the Channel Islands. This is a game fish that is more appropriate for an advanced spearo to go after.

This is a perfect fish to spear to go after a pole spears record if you have a chance!

For more information on How to Catch Yellowtail.

Bluefin tuna is in a class of its own. When they roll through our waters, it’s a big deal, and guys chase them with monster tuna spearguns, multiple high-pressure floats, tuna bungees and floatlines, and lots of time on the water.

We’ll share how to tackle those fish in another article.

Which Spearguns to Use for Spearfishing California Waters

Now that we have covered most of the game fish, you might be considering spearing or catching (as a beginner). We are now going to cover what kinds of spearguns or pole spears are best for spearing certain game fish.

If you want to learn more about spearguns, check out our in-depth guide.

A diver generally prefers to use a speargun with a reel when they are diving from the beach. The reason for this is that a floatline can get tangled in the rocks and kelp. Also, if you swim out with it, then you have to untangle it before you start to hunt.

One thing that I like about a floatline is that if you drop your gun, the floatline will be on the surface so that you can relocate your gun. If, on the other hand, you have a reel on your speargun and you drop it, it will sink to the bottom, and you may never find it (unless the gun floats).

If you are starting, you are probably going to be targeting fish less than 15 pounds. Therefore, certain equipment like the size of spearguns is more suited for these sized fish. Anywhere from 60 centimeters to 90 centimeters would accomplish you catch these smaller fish.

If you want to target fish that are 20 pounds or larger, then you can move up to guns from 100 centimeters to 130 centimeters. The reason for the larger spearguns is that they will shoot further and have more penetration at a further distance. This will make things a lot less difficult for you to spear.

I recommend that when beginners purchase their first speargun that, they order the guns with the 9/16″ bands. This is because the 5/8″ are harder to load, and most beginners do not have the upper body strength required to load the 5/8″ bands yet.

Which Pole Spears to Use While Spearfishing California Waters

If you want to learn more about fishing spears, check out our in-depth guide on pole spears.

Crist pole spears are also high-quality aluminum fishing spears that can take down any size fish.

If you plan on doing any traveling, the Sea Stinger travel pole spear that breaks down for maximum travel convenience, comes with a single barbed tip and a sharp paralyzer tip for any diving occasion.

Speargun vs. Pole Spear: Which is Better?

Before you start spearfishing, you need to decide whether you are going to use a speargun or a pole spear. A speargun is going to cost you a little more money; however, your first dive will probably be enjoyable. With most spearguns that are advisable for a beginner to start with, you will have a six-to-fourteen-foot shooting distance with which to hit your target.

If you decide to start with a pole spear, then your learning curve is going to be greater. With most pole spears, you will have to get within less than four feet of your target. However, some people enjoy this challenge.

This topic is vast, and there are many things to consider. If you want to learn more about the two methods, check out our in-depth guides below:

This post was inspired by the great work of Dr. Milton Love out of the Love Lab at UC Santa Barbara.

Check out his amazing book: Probably More Than You Want To Know About The Fishes of the Pacific Coast.

If you decide you’d like to visit Santa Barbara to try some spearfishing, be sure to look for some budget accommodation in Santa Barbara so you can make the most of your trip.