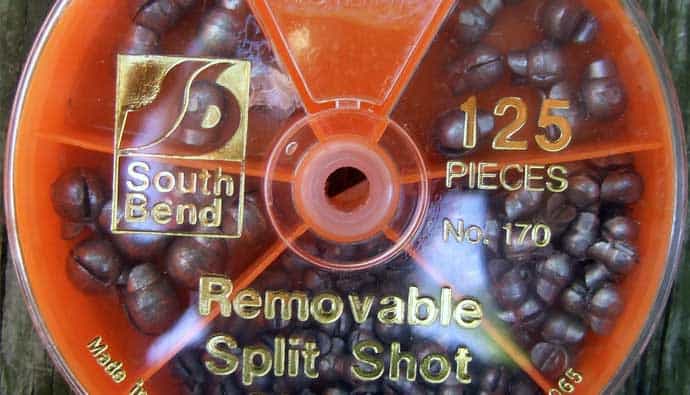 The Split Shot Rig is a simple rig that will help you cast your bait farther and keep your bait low in the water.

This rig is a simple yet effective setup in any fishing scenario.

In this article, we will cover split shot rigs, how to use them and how they can be used to their fullest potential.

What is a Split Shot Rig?

Often made of tungsten or lead, a split shot rig can be defined as three simple items. A fishing hook, split shot weight, and the lure of your choosing. These lures are often soft plastics of one variety or another.

Split shot fishing requires the weight or weights to be placed against the line and attached by adding pressure or squeezing with fishing pliers.

Some, if not most, split shot weights will have a slit in them for sliding the line into. This allows the angler to attach them more firmly to the line with fishing pliers.

Strategically placing the split shot weights at the distances from the hook and each other, as mentioned above, allows for a more lifelike presentation of the lure or baits both in sinking and retrieval.

When To Use A Split Shot Rig

Split shot rigs can be used in any type of fishing scenario. For example, freshwater fishing, saltwater fishing, and trout fishing.

When using a split shot weight in a saltwater situation, often more weight will be needed to produce a better sink rate.

Using a split shot rig makes adding more weight much more manageable than most of the other rigs by allowing the angler to simply attach the shot to the line.

Fishing split shot is a favorite among bass anglers as well. Adding or reducing weight as needed allows for more time in the water and less time tying.

The split shot rig for bass is a game-changer!

Soft plastics, particularly worms, work exceptionally well with split shot rigs. The weight is further up the line guarantees a more lifelike presentation. And anyone who has ever bass fished will know, this is crucial to landing the big ones.

How to Use a Split Shot Rig

A split shot rig is one of if not the most straightforward rigs to set up and use. As we covered in the definition, it consists of the parts, the hook, the split shot, and the lure.

After attaching the hook to your line of choice, add the lure of your choice. Often this is a soft plastic, usually a worm. However, any light baits can benefit from split shot weight.

Attach the split shot weight six inches from the tie point of the hook. If the split shot has an opening split, slide the line into the split and squeeze with fishing pliers.

If your split shot does not have a split, you can attach it by putting the line against it on the side and squeezing it with your fishing pliers. Split shot is soft enough to allow the shot to be squeezed around the line.

Once attached, you are ready to fish. If you see your situation calls for more shot to be added, add it about one inch from the last using the same method above.

Split shot rigs have been around a long time, and I suspect they will continue to be very popular due to their ease of use and effectiveness.

Probably, as most anglers would agree, the most popular thing about using a split shot rig is it allows you to make adjustments very quickly in any fishing situation.

We recommend keeping a healthy quantity of split shot in your fishing tackle box. You never know when it will come in handy!

I hope this article has been informative and renewed your faith in the trust split shot rig. We love hearing from you so feel free to drop us a comment.

What are split shot made of?

Split shot of the past was primarily made of lead, they can still be found today. However, tungsten has fallen more into favor.

Yes. There are several choices depending on the fishing situation you will be using them in. Often, a more extensive variety can be found online.

Does split shot say on the line well?

Yes. If attached properly, it is very secure.

How do I know how many split shot to use?

This depends on several factors. For example, saltwater fishing would often require more because of deeper water. You would need to cover more depth quicker or fight currents. Freshwater fishing in shallow areas would require less.

The weight of the lure and style of fishing you are implementing would also make a difference in the amount you would use.