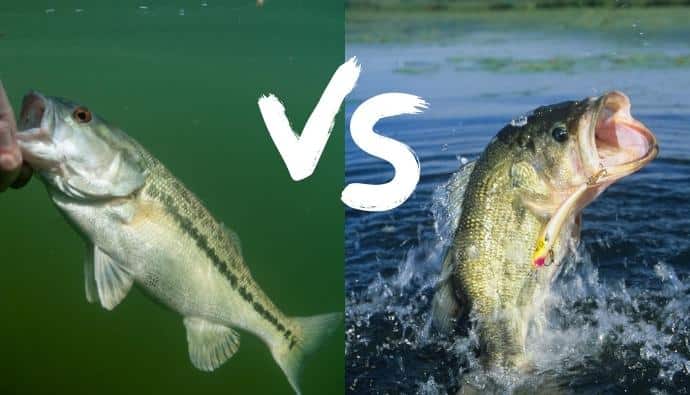 The largemouth and spotted bass are among the most sought-after freshwater species among freshwater game fish.

Both of these fish inhabit the same waterways, and occasionally can be challenging to tell them apart without prior knowledge of their defining characteristics.

The ability to differentiate a spotted bass from a largemouth bass can be critical when fishing restrictions are in place.

These restrictions vary from state to state, so anglers may find this guide incredibly useful when adhering to the statutes of the bodies of water there fishing.

Both the spotted and largemouth bass are native to the eastern and central United States but can also be widespread across the country. Both species are common spanning from Virginia to Georgia and many of the Gulf states.

While both largemouth and spotted bass provide a thrilling experience for fisherman, they are also prized for their culinary profile.

The spotted bass is often referred to as a “spotty” within fishing circles and is native to North America’s fresh waters.

Burning its moniker from the horizontal bands of black dots just below its lateral line, it’s a black bass found only in the Mississippi river basins and the Gulf of Mexico, ranging from Texas to the Florida panhandle.

Originating in the central mid-Atlantic to western regions, it was later introduced to Virginia and western North Carolina. Having introduced this fish throughout the United States, it has become somewhat of an invasive species.

Many anglers confuse spotted bass for largemouth bass because of their coloration. There are many differences, including the absence of vertical bars on its body and several other physical distinctions.

Spotted bass possesses a white flesh that is both firm and flaky making it ideal for grilling and a delicious freshwater seafood dish.

Largemouth bass are a species of predatory freshwater gamefish found throughout the eastern and central United States, northern Mexico, and southeastern Canada.

The largemouth bass is a greenish-gray to olive-green fish with a jagged, dark black stripe running laterally down each side of its body.

Reaching sexual maturation at roughly a year old, the largemouth bass begins to spawn with the water temperature reaching 60° in the spring. Anglers value the largemouth bass not so much for its flavor profile but the enthralling fight it puts up when hooked.

This type of bass is well-known for leaping into the air to dislodge its hook and making quite the splash when doing so. It should be noted that many anglers feel that the smallmouth bass is the more aggressive of the two species.

The spotted bass and largemouth bass have a few distinguishing characteristics that set the table apart. The size of the lower jaw, scales on the cheek, location of the dorsal fin, the shape of the tongue, and the belly’s appearance are several of these.

Although it’s not always possible to make out these details, understanding these physical differences can help determine whether it is a spotted or largemouth bass.

Side-by-side, largemouth bass are clearly bigger than spotted bass. Spotted bass may grow up to 25 inches and have been recorded at weights of 11 pounds, while the heftiest largemouth bass ever recorded came in at a whopping 29.5 inches in length and weighed in at 22.4 pounds.

Pregnant females are often the longest and largest fish caught, but they should always be returned and released as they are the species’ future.

The average lifespan of a largemouth bass is about 16 years. Spotted bass survive around six. Largemouth bass are solitary fish whereas spotted bass are a more social species and can often be found in schools.

If a largemouth bass is caught, it will likely head for the water surface and leap from it. The spotted bass, alternatively, is known to make a run for the bottom when hooked.

Spotted bass are typically found in a wide area of water with little to no debris. Preferring pristine water conditions, they are often found at depths of 30 feet or more.

Largemouth bass prefer warmer, less clear water and will swim in shallow areas more often than their cousin. Largemouth bass will slow down when the temperature dips well. Spotted bass will be active year-round.

Largemouth bass and spotted bass share a similar diet, but the later consumes only half as much food as its cousin. Their diets include smaller bait fish, water fleas, shrimp, insects, and crustaceans when juvenile.

Because these animals are sight predators and rely heavily on clear water to locate their prey, lures that are both noisy and distinct in coloration or appearance will have a higher chance of success.

Spotted bass will continue to hunt year-round, despite the lowering of temperatures, with moderate aggression. Largemouth bass peak during spring and summer, being their most aggressive seasons.

Largemouth bass prefer warmer water that is slow-moving with lower levels of purity. The structure is a major factor for largemouth bass as they are ambush predators, striking viciously at both top water and crank baits.

Though largemouth bass and spotted bass share an incredibly similar diet. Several factors will impact lure selection to maximize angling for one species or the other.

Largemouth bass prefer murkier, shallow water with lots of structure. This means that topwater lures that create a disturbance and shallow running crankbait will work very well because the sound is a significant factor in their ability to detect prey.

Lures that create a higher level of noise or disturbance work better.

Spotted bass, on the other hand, prefer clearer, deeper water with less structure. Spotted bass can be angled with deep running crank baits weighted down or spoons.

While creating a disturbance is still important to attract the attention of fish, the clear water forces anglers to choose a more flashy and attention-grabbing lure.

Note: Spotted bass during spring and summer months have been observed and caught striking shad midway up the water column to the surface. No lure is absolute, and spotted bass can be caught throughout the entire day of the water column.

Which one is better for eating?

Largemouth bass tend to have a slightly more fishy flavor than their cousins and can be a tougher fish than many of their freshwater relatives.

Alternatively, spotted bass and smallmouth have a very similar profile. Ranging from mild to sweet in flavor, they are both easily palatable.

Spotted bass are significantly higher in omega-3 fatty acid levels. Nutritionally speaking, both bass are a great choice, as 3 ounces of bass is equivalent to 21g of protein, 82% of B12 daily vitamin needs, and other vitamins such as potassium, phosphorus, and copper are readily available inside this food source.

Largemouth bass has a slightly higher mercury level. Depending on the area, the state may issue mercury level alerts, and individuals should not eat fish with high mercury levels more than once a week.

Will I find these bass in the same water?

Yes, it’s pretty common to find these fish sharing a habitat. However, it should be noted that there will always be a species with a larger population that is dominant in the environment.

What is the easiest way to tell these two bass apart?

The mouth. The Largemouth bass mouth will reach behind its eyes, while the spotted bass’ mouth will stop short like a small mouth.

Are Kentucky Bas and Spotted Bass often confused for each other?

It’s an interchangeable name for the same bass. The Spotted Bass is pretty standard in Kentucky and is often referred to by that name.

Which is more fun to angle for?

If you’re looking for a fight, the largemouth bass will hit like Mike Tyson at the end of your line. The more aggressive of the two fish, largemouth bass, will bring anglers of all skill levels joy as it writhes from the water surface, attempting to spit out the hook. However, those looking to angle for a meal may prefer spotted bass due to its flavor profile and lower mercury levels.

Both widespread freshwater game fish spotted bass and largemouth bass are two of the most sought-after species in the water. Because they frequent the same waterways, telling these two fish apart could be challenging.

Differentiating the largemouth and spotted bass by its mouth, scales, dorsal fin, tongue, and other features can help anglers avoid fines and specifically target the species of their choice.

Remember, the easiest way to tell is the mouth. As always, good luck, and stay safe out there on the water.