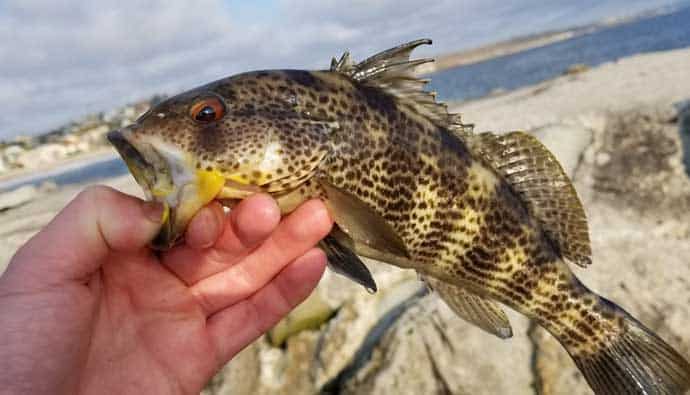 Are you looking for a fish that grows fast and puts up a fight irrespective of its size?

If you said yes, try going after the spotted bay bass.

As is apparent by the name, this fish is found throughout bays and harbors notably around Baja and Southern California. It is also called sandbass, rock bass, spotted, spotty, and even grumpy.

Spotted bay bass can be found in the Gulf of California, California, Mexico, and all the way to Monterey. What is really interesting about this bass is that it is a hermaphrodite i.e. it can change its gender from female to male.

The fish prefers habitats in the shallows that are sheltered and soft-bottomed. It is frequently spotted around bays, harbors, and estuaries where it feeds on small fish and crabs.

This species of bass grows faster than other varieties and it does not have a long life span either. This bass matures at 1 to 2 years or when it reaches its maximum length of 6 to 7 inches. The fish is targeted mainly for catch and release so it is not endangered. However, spotted bay bass fishing is extensive in southern California where its numbers have dwindled.

Most spotted sand bass can be found confined to large bays in southern California. This is why they are caught less frequently than the kelp bass or barred sand bass. They can also be found out in the open ocean but only in areas that have a lot of kelp. The spotted sandbass tends to hide in.

While their numbers have dwindled in southern California you can still catch a fair few in Newport Harbor.

How to Catch Spotted Bay Bass

The spotted sandbass is a light tackle fish so you should use a baitcasting or light spinning set up that is not more than 4 to 8 lbs such as a Daiwa Certate.

The bass can be lured with a variety of spotted bay bass lures such as plastic swimbaits. Make sure you take several in a range of colors such as brown and lime green.

If you prefer to use live bait, use small anchovies, ghost shrimp, and blood worms. Just cast these towards the structure you are aiming for without adding any weight and set the hook as soon as you feel a bite.

Just make sure that the hook is very sharp before casting. Spotties have large heads so if it is blunt, it won’t penetrate the skin.

The best time to fish for spotted bay bass is between March and November and for peak catches. You should fish in the spawning season which lies between May and June. Most spotties that are caught during this season are between 12 to 13 inches in length and can be found 200 feet under the surface.

This fish can be caught year-round, but it will be elusive during other months even if you fish out on the open water.

When it comes to fishing for spotties, you cannot go wrong with a rod that can be used inland and out on the water. If you are fishing from the rocks, it should have a 15 lb rating at least and the reel has to be strong enough to withstand that weight as well.

Since you will be fishing in saltwater lagoons and bays for this fish, use a 15 lb P-line and swimbaits.

The bay bass is known for being a fighter but that is what makes it such a great catch. However, with the aforementioned rod and reel combo, tips and fishing strategies you can increase your chances of catching a big one. If you have already tested your mettle against this bass, do share your experience in the comment section below and share this guide.

Q: What do spotted bass eat?

A: Young spotted bay bass eat insect larvae, plankton, insects as well as other small fish while adults prefer a diet of shad, golden shiners, salamanders and crawfish. However, this fish is known for eating almost anything it can fit in its mouth if its main source of food is scarce.

A: Women who are of child-bearing age and children should avoid eating this bass. In fact, most anglers catch and release the fish.

Q: Where can I find spotted sand bass in the water?

A: This bass prefers to remain hidden so you can find it in muddy or sandy areas of eelgrass or surf grass as well as submerged structures such as pilings and rocks.

Q: What do male and female spotted bay bass look like?

Q: How long do spotted bay bass live for?

A: The life expectancy for this bass is 14 years during which they can grow up to about 23 inches long and weigh 6lbs in weight.