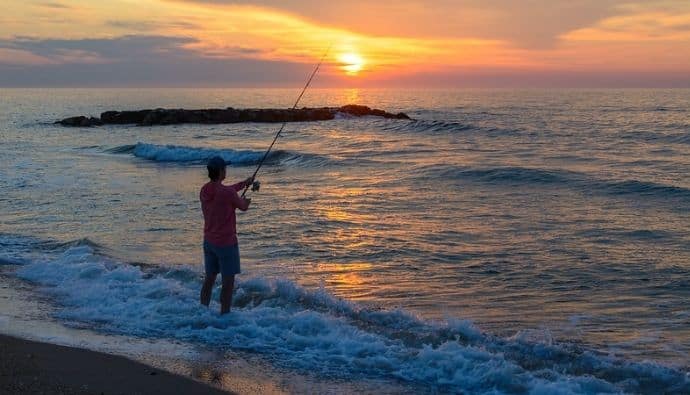 Structure holds life in the surf.

Therefore, if you’re not finding the various types of structure, you’re casting into the abyss.

How To Find Structure While Surf Fishing (Listen)

3 Basic Structures Worth Focusing On

To find holes and troughs, look for where the waves crash last. If you’ve ever walked into the water for a swim and sank, that’s a hole or trough. Fish love these areas to move around to find food.

How to Fish a Trough

Cast at a diagonal and reel it in. You want whatever’s in the trough to hit your bait.

This is where the waves are pulling out like a river. This is the area lifeguards warn you to be careful if you’re swimming or surfing as there are a lot of currents.

The current might not be great for a swimmer, but it’s great for moving bait around for fish.

How to Fish a Rip Tide

Cast your bait into the middle and let the current it into the strike zone. Once it gets near the edge of the rip start to reel in.

Try fishing both sides of the rip.

If you’re looking out and see waves rolling instead of crashing, that is likely a sandbar.

You need to be thorough in your ability to work the various structures.

That means being mobile. If you’re not scouting out the various structures and hitting them for a time, you’re going to miss fish.

Don’t just stay in one spot and hope the fish will come to you. Unless you’re chumming, it’s best to give each spot a bit of time then move on.

Get Comfortable With Tools

Good surf fishing comes down to stacking the right tools to plan out a successful fishing outing.

But the one thing that beats any tool by far…

Time on the water! Get out as often as you can. Get skunked. Take notes and get after it!

Good luck out there!