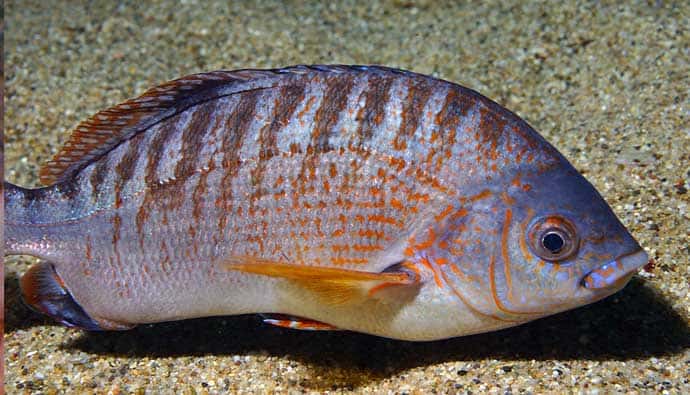 Surf perch fishing is a thrill on light line.

This guide outlines a few of the commonly caught surfperches here in California. Use this guide to help you identify which you’ve caught.

There are several different varieties of this fish many of which look quite like one another.

Yet, by understanding the differences you can increase your chances of getting a big haul. Read on to find out more about this elusive fish and the types you can encounter while you are fishing.

Location – This surf perch is native to the Eastern Pacific Ocean and occurs from Rio San Vicente, Baja California to Schooner Cover that is near Vancouver Island.

Identification – The body of this perch is oval and compressed. It has a small head and a large mouth while the body is silvery with brownish to gray coloration on the back.

Size – This species can grow to about 11 inches long.

Habitat – The silver surfperch frequents the sandy surf zone but they can also be found amidst shallow rocks around piers and bays.

Fishing tips – Silver perch usually remain mid-depth to the top of the water so the best way to catch them is by fishing at the bottom. For perch bait, use a worm as bait to lure them into biting. The fish is plentiful and easy to catch in large numbers near shorelines and piers.

Location – Can be found in the Eastern Pacific Ocean from Vancouver Island to Mexico including Guadalupe Island.

Size – This species can reach 12 inches in length.

Habitat – The walleye prefers to remain in the shallows near sand and rocks. It is common in bays and oceanfront areas throughout the year in dense schools.

Fishing tips – This species of surf perch is rarely caught by boat since it remains near the shore. A light tackle surf perch rig will work such as a modified snag line, size 8 hooks and each baited with a cut-up anchovy as perch bait.

Identification – The body of the shiner perch is oval and compressed with gray or greenish coloration at the top. It has vertical yellow crossbars that look like the shape of a 711 and it also has several gray lines along the side.

Size – The fish can reach about 6 inches in length.

Habitat – These are found in estuaries, lagoons and coastal streams along the coast from Alaska to Baja California. Most prefer to remain in eelgrass beds and congregate around piers.

Fishing tips – Catch shiner perch from docks, piers, rocks and any other area you are comfortable fishing from. They can be caught using almost any type of perch bait and fishing equipment as long as the hook is small enough to get in its smallmouth.

Location – The redtail perch occurs from Avila Beach in California to Vancouver Island in British Columbia.

Identification – The upper profile of the head of this perch is almost straight from the snout to the dorsal fin. It has a slight depression under the eye. The body is silvery with olive green mottling and it has bars on the side as well. The tail is pink or deep purple, thus the name. It also has spines on its dorsal fins.

Size – This surf perch species can grow up to 17 inches in length.

Habitat – Redtails are surf dwellers and remain near sandy beaches. Yet, some have been known to venture into rocky areas right next to beaches. It can also be found in estuaries during the spawning season.

Fishing tips – Make sure you have the right perch fishing rigs on the ready. The best baits for this perch include small crabs, marine worms and shrimp but you can also score with tubeworms, sand crabs and clams. The numbers increase before spawning season and can be found in large schools in sheltered inshore waters during spring and early summer.

Location – This surf perch occurs from Thurloe Head in Baja California to the Russian Gulch State Beach in California.

Identification – The body of the rubberlip surf perch is oval and compressed. The mouth is large and it has thick lips thus the name. The lower jaw is shorter than the upper one and it is usually whitish in color with brown or brassy undertones on the back. The lips are white or pink in color.

Size – The rubberlip is the largest species of surf perch and can reach a whopping 18.5 inches in length.

Habitat – Rubberlips prefer to remain in shallow water in rocky areas, tide pools, around harbors, bays and in kelp beds. They come out to hunt at night and use their sensitive lips to detect prey.

Fishing tips – Rubberlips can be caught from the shore, skiffs, and piers. Use mussels, sandworms, clams, cut up shrimp and another similar bait to attract it to your hook. Most are taken on a high/low leader with size 6 and 4 hooks that are baited with live bait. Some anglers use plastic grubs as perch lures to bag large ones.

Fishing tips – Calico surfperch love sand crabs and worms such as blood worms and pile worms. You can also catch them on shrimp, muscles, and clams.

Fishing tips – The black perch like to inhabit shallow rocky subtidal areas and also like to hide in kelp forests. You can find them near piers, over sand, and in the eelgrass. Catch them on blood worms, pile worms, small pieces of shrimp, small rock crabs, and mussels.

Fishing tips – The pile perch loves to eat during the day and you can catch them on a wide variety of baits. Try crabs, mussels, blood worms, and grass shrimp.

Fishing tips – The white perch isn’t picky and will go after pretty much anything the other perch types are eating. This includes mussels, blood worms, and shrimp.

Fishing tips – You can find the rainbow surfperch in shallow areas and around rocky-shorelines. Use a small hook baited with mussels, pile worms, or small rock crabs.

Q: Do surf perch have teeth?

A: Yes but surf perch teeth are quite small and they have two sets. The fish uses the teeth in the front to grab prey and uses its back teeth to crush it.

Q: What are the best perch rigs that seasoned anglers use?

A: There are several. You can use a live bait rig, slip bobber, lindy rigs and inline spinners.

Q: What are popular baits for surf perch?

A: Mole crabs, marine worms, mussels, clam necks, and sand shrimp but your choice will depend on availability, preference, and convenience. Some anglers gather worms, crabs and shrimp when the tide is low from the same beaches that they fish from later.

Surf perches come in a range of sizes. Even though each species is almost indistinguishable from the next, each has its own feeding and habitat preferences. That information can prove invaluable when you are angling for this fish and want to catch a trophy perch.

Do you have any tips and strategies that worked while you were angling for surf perch? Share them in the comments section and share this guide if you liked it.

Also, be sure to check your local regulations before fishing!

Cast & Spear occasionally links to goods or services offered by vendors to help you find the best fishing products. Some of these may be affiliate links, meaning we earn a small commission if items are purchased. Here is more about our approach.

Scroll back to top