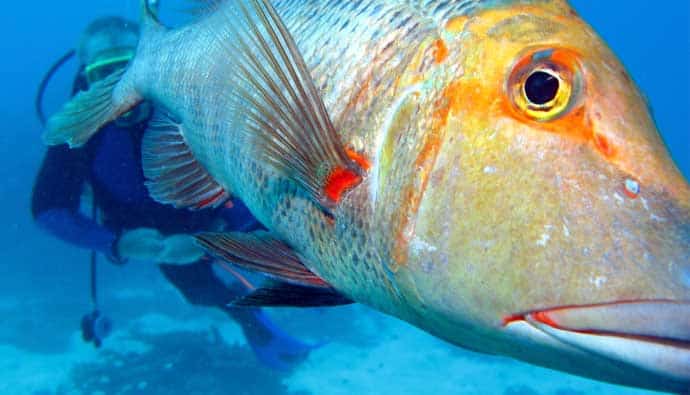 When I first saw the Sweetlip Emperor I was taken aback by it interesting looking mouth and red dorsal fin. What an awesome fish!

In this guide, we’ll cover why it’s so cool and how you can catch and cook it.

Also known as sweetlips, red throat, Lipper, yellow mouthed perch, red-throated emperor, and sweetlip swoose, the sweetlip emperor is instantly recognizable by its large lips and snout. The area around the eyes of this unique looking fish is orange in color, and its body is light gray with a few black scales in between. The best way to determine whether the fish you caught is a sweetlip is by checking its mouth, which should be a brilliant red.

Sweetlips can be found around the Abrolhos Islands in Australia and around New South Wales. At most, it can grow up to 35 inches in length and can weigh over 11 lbs. It usually feeds on invertebrates, smaller fish and crustaceans along the seafloor.

This fish prefers to remain amidst coral reefs in warm water, and it can be found in large numbers in the Great Barrier Reef. Juveniles stay in shallow inshore waters. This includes seagrass beds and mangroves where it can hide from predators.

How to Catch Sweetlip Emperor

A fascinating sweetlip emperor fish fact is that it fights well and fights hard when it is hooked. Once it is caught, it quickly swims to the bottom to try and break the line, which can happen if you are not quick enough to reel it in. The fish is easily lured with common bait such as cut-up pilchard, squid, crab, prawn, and mackerel. However, they respond particularly well to soft plastic lures.

If you are fishing in deep waters, make sure that you cast with the current rather than against it and make sure the lure is as close to the bottom as possible. If you use a jig, it has to be healthy, or it will not survive the emperor onslaught! 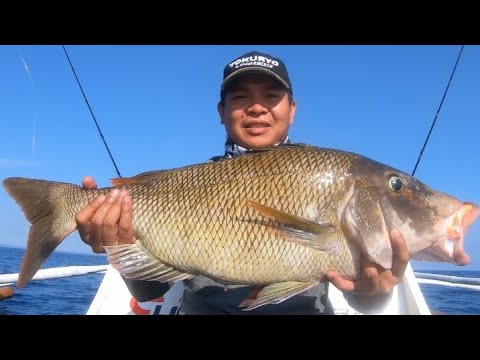 The sweetlip emperor fish has a strange breeding and development pattern. For example, it frequently spawns off the coast of Cairns, but, in Townsville, the fish spawns in June and August. Similarly, they spawn in October and November in southern waters.

This may have to do with different water temperatures, which have to be warm, or the fish refuses to spawn.

How to Clean Sweetlip Emperor

Q: What is sweetlips called in Spanish?

A: Sweetlips are called dulces labios in Spanish.

Q: Why is the sweetlips emperor fish called a protogynous hermaphrodite?

A: This species of fish starts as female but changes to a male when it is about 3 to 4 years of age.

Q: Is the sweetlip emperor fish good to eat?

A. This fish species is coveted as seafood, so, yes, it is an excellent fish to eat.

The sweetlip emperor fish can be challenging to catch, but it is so gorgeous to look at chances are you won’t waste a minute trying to hook one. The catch will make a great addition to your collection, and you can use the techniques you learned here to catch other types of sweetlip as well.

YouTube
Articles » Saltwater Fishing » How to Catch the Sweetlip Emperor