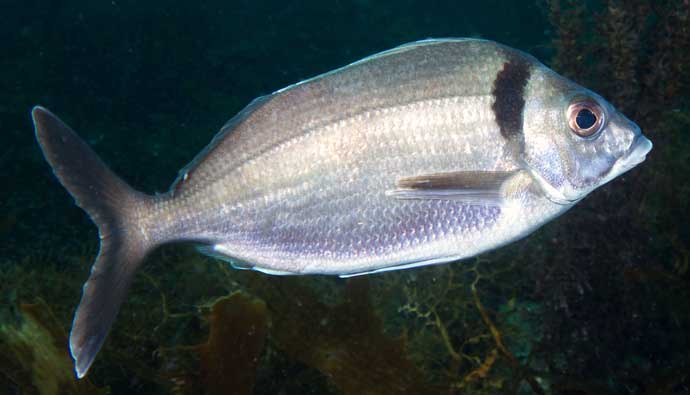 The tarakihi is loved by both commercial and recreational fishermen and belongs to the Cheilodactylidae family.

It is quite common off the coast of New Zealand around the south of East Cape, South Island, as well as around southern Australia and South America.

Also known as the jackass morwong, the tarakihi fish or nemadactylus macropterus is silvery gray and has a white underbelly. It has a distinctive black band between the head and dorsal fin, a small mouth, and a compressed body.

When it comes to tarakihi vs. snapper, the difference is not obvious at first glance. The former is about the same size as the snapper but is thinner in comparison. The fish rarely grows more than 12 to 24 inches in length.

Tarakihi is a type of schooling fish that can be found in large numbers around the edges of reefs and wed lines and over sandy bottoms. You can find them 100m deep underwater in clear water that is frequented by hapuka, which is their main predator. The fish feeds on a variety of crustaceans as well as smaller fish, worms, shrimp, and shellfish.

There are several methods for catching nemadactylus macropterus that you can use for to get a large, commercial catch. Here are some things that you should consider:

The most common and firm rig that is used to catch tarakihi is a dropper or paternoster rig that has a few branches off the mainline and a sinker at the bottom. You can also opt for ready-made flasher and dropper rigs that are readily available.

If you’re going for big ones, throw on some 30 lb braid on 3/0 dropper loop rigs with squid as bait and 10oz sinkers.

Tarakihi can be spotted in clear patches of water that are right next to polluted reef waters. Since the fish congregates deep underwater, you will have to take a boat out.

Tarakihi can be located and caught at any time of the day but to make the most of your fishing trip, head out on the water during dusk and dawn.

Cooking methods for this fish vary by region but you can make a splendid dish with it using this recipe:

A. The fish has medium to firm white and moist flesh.

Q. When do tarakihi spawn?

A. The fish spawns during summer and autumn along the coast.