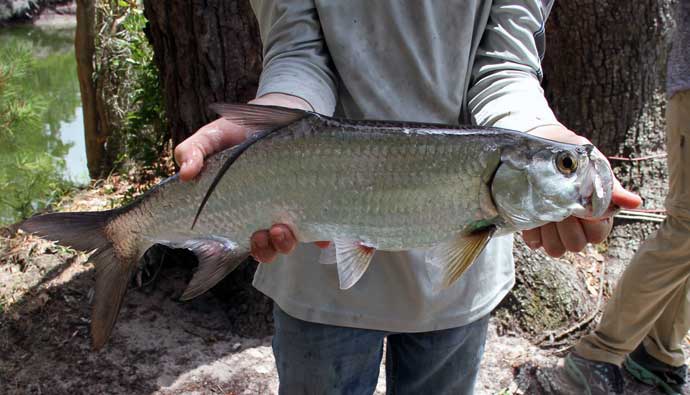 Are you eager to go on a tarpon fishing trip?

Let’s learn what it likes to eat and how you can catch a giant tarpon! Get answers to these questions and more in these tarpon fishing guides!

There are two species of tarpons, the Atlantic tarpon, and the Indio Pacific tarpon.

The fish can grow to about 4 to 8 feet in length and has a bluish or greenish back. The tarpon scales are shiny and silvery in color and they cover most of the body except the head. The eyes and mouth are large and it has a prominent jaw.

Freshwater tarpon exists because of the tarpon’s unique ability to gulp air which allows them to survive in both fresh and saltwater environments.

The tarpon fish populates a range of habitats but it can usually be found in large numbers in bays, coastal waters, estuaries, and lagoons. These lagoons are fringed with mangroves in temperate to tropical climates.

The fish can also tolerate euryhaline environments due to its modified air bladder that allows it to survive on atmospheric oxygen. If the temperature drops, tarpon seeks refuge in warmer and deeper waters.

Tarpon Fishing: How to Catch Tarpon 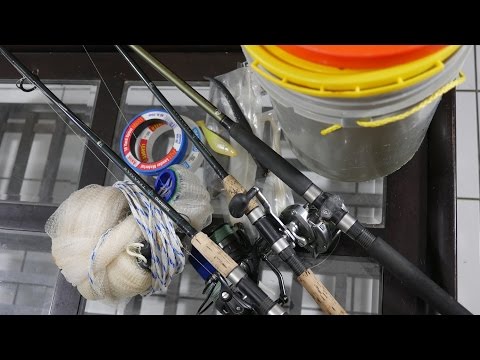 Tarpon fishing is like fishing for dinosaurs. The species has been on this earth since prehistoric times and can live up to 80 years. It has no commercial value but it is one of the most sought after sport fish in the world.

Even though tarpon fish can reach up to 250 pounds in weight, you don’t need a super heavy tackle to reel one in. A spinning reel that is between 4000 to 7000 size range and a medium-heavy rod is the best tarpon fishing gear for catching tarpon Plus, use up to 50-pound test braided line and a 250 – 300-yard spool.

The tarpon fish is highly migratory so you have to be at the right place at the right time to catch one. The fish travels thousands of miles across its natural range which can extend from the Atlantic Coast of Brazil to Virginia and beyond.

Starting in April or May the tarpon swims out from their warm water habitat and head north where they move into bays and passes that range from Texas to the Florida Keys. That is where they feed on blue crabs before spawning offshore.

Boca Grande Pass is also a great spot for tarpon fishing in summer. This is where a lot of tarpon gather to feed during the season.

Even though the fish spawns offshore, the best time to catch them is before they head out to sea. You can also catch it in inshore waters throughout the Gulf Coast.

Is tarpon good to eat?

Tarpon is quite bony and not tasty enough to be considered good table fare. That is also the reason why it is not commercially popular. Once caught they are thrown back.

What do tarpon eat?

Tarpons are aggressive feeders and despite being a large fish, they usually go for smaller prey such as shrimp, crabs, and worms. Their main diet includes mullet, pinfish, and sardines.

Do tarpon have teeth?

Yes. The fish has an enormous mouth that is filled with extremely small villiform or densely packed teeth on its jaw, tongue, palatines, and the base of the skull.

Tarpon may look docile but the fish fights aggressively once it is hooked. Make sure that you have others with you while angling for one for an extra muscle to reel in a trophy catch.

Do you have tips and strategies that worked for you while you’re tarpon fishing? Share them in the comments section and do share this guide if you liked it.