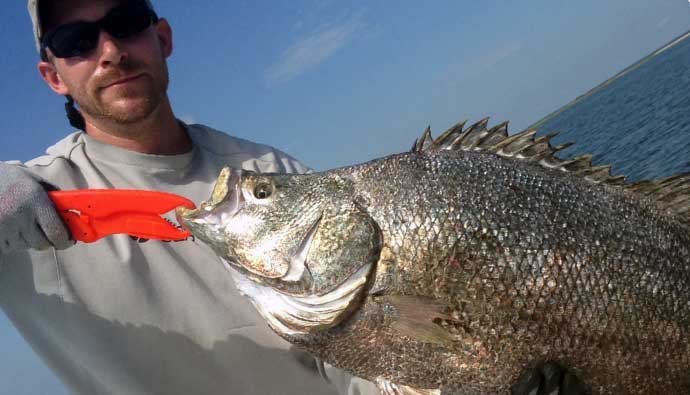 If there’s one thing for certain, the tripletail fish has a unique looking set of fins.

In this guide, we’ll go into why we think it’s special and how you can catch more of them.

Also known as blackfish, black grunt, buoy fish, conchy leaf and black perch, this fish belongs to the Lobotidae family and is prized by anglers.

However, even though they swim like flounders, the triple tail remains near the surface of the water imitating leaves and flotsam. The fish can also change its color according to its habitat making its disguise complete. That’s why you can find several tripletail fish pictures online that look distinct from one another.

Tripletail can be found along the gulf coast as well as tropical and temperate waters across the globe such as Japan, Fiji, and Tuvalu. However, it is not related to any grouper species that is found on the gulf coast.

The tripletail is usually solitary but can be found in schools as well. Look for it in bays, estuaries, and sounds in the summer and fry remain under algae in Florida. Adults can be found in passes, inlets, and bays that are near the mouth of rivers. You can also find the fish around shipwrecks, jetty pilings, and buoys.

This species is the only one in the family of Lobotidae that can be found in the Atlantic Ocean.

The tripletail is an opportunistic eater i.e. they just float sideways in the water to fool prey into coming near before striking. This includes shrimp, blue crabs, anchovies and gulf menhaden.

How to Catch Tripletail Fish

The tripletail may look and act strange, but it is an excellent tablefish, one of the main reasons why it is prized by fishermen. A tricky one to catch, here are some tips that can help you increase your chances of a good haul.

If you are targeting a large tripletail fish, go with a rod that is stiff and can set the hook without trouble and hold plenty of lines. If you are using bait, make sure you have a short leader and a popping cork.

The process of fishing for tripletail is sight fishing. Search for tripletail in Florida by keeping your eyes peeled for anything that is floating (yes, floating objects) on the surface of the water and chances are you will spot one floating near it as well. This includes weed lines, floating coconuts, wooden pallets, branches, and crab/lobster trap buoys. It will look like a large garbage bag and will not dive too deep.

The triple tails fish can be found in Florida waters during spring, summer, and fall. It spends a lot of time close to shore between March and November in inlets, bays, estuaries, and lagoons. During the winter, it moves offshore or south to escape the cold weather. However, the tripletail can be found year-round in the south of Florida.

The crabbing season in the Gulf Coast starts in October which means you can find thousands of traps/hangouts for tripletails during the season. A lot of them will be floating close together during this time so that you won’t have any trouble catching them.

Here are a few more tips to help you catch tripletail fish!

How to Cook Tripletail

Q. How big can triple tail fish Australia get?

A. Live tripletail in Australia can grow to weigh as much as 22 pounds and can grow to 40 inches in length. But most don’t weigh more than 6 to 7 pounds.

A. The meat of tripletail is sweet, firm and flaky which is why it is coveted by anglers.

Q. What is the single most important piece of gear I will need to catch tripletail?

A. You won’t catch any tripletail if you don’t have a rod that can take the fight the species will put up once it is hooked.