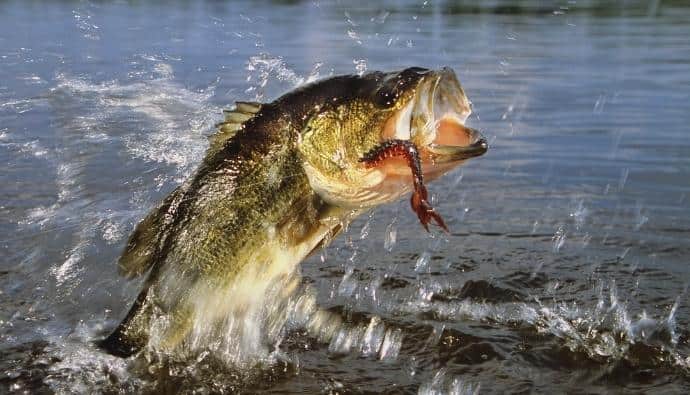 Bass fishing is often associated with southern ponds, rivers, and streams, referring to large explosive green fish that is delicious and an absolute joy to have at the end of your line.

While many may think of early mornings on the lake or tournament-style competitions, others may associate it with deep water or coastal angling.

The variety of species throughout North America hold the nom de guerre bass. Although we cannot address all of them in this article, two major families of bass are found within North America and a handful of outliers.

Many of them will be familiar, but you may surprise yourself and learn a thing or two about one of the most sought-after names in the water.

Though many have know black bass as they refer to bass, there are a variety of species within this subset.

A multibillion-dollar industry revolves around these fish, with weeks out of the year dedicated to exciting tournaments where pro-bass anglers travel the country facing off against monster fish and each other.

Here are a few of those species.

The largemouth bass is incredibly wily, and to catch the same fish twice requires new techniques and tactics. Fish, tiny birds, and insects are on this Apex predator’s menu, yet they will sometimes ignore even the most compelling lure if they’ve seen it before.

Though bass enthusiasts often oversell its intelligence, the largemouth bass is a fantastic game fish and wily opponent.

Largemouth bass has a single black or dark stripe that runs laterally across its entire body and has a mouth that extends past its eye.

These thick-bodied, green, and various shades of off-white and occasionally brown game fish may seem a little lackluster in their appearance.

However, with their lack of aesthetics, they make up for power and aggression, making them a favorite among anglers whose flavor profile sets them near the top of the food chain with any seafood cuisine.

Largemouth bass prefers slower-moving water, with warmer temperatures and lots of structure. They can often be found in places with clay or mud bottoms and lots of vegetation.

Those smallmouth bass are often not talked about as much as their largemouth brethren or given the same attention that they deserve just as much of the spotlight.

Large and smallmouth differences are primarily based on size, habitat, and a few features.

Smallmouth is often shorter and thinner than largemouth, with a mouth that extends near the eye but not past it like their larger cousin. Also, smallmouth has one solid dorsal fin, while largemouth has a split one. Smallmouth also has vertical stripes along their body.

These two species will often be found together, but usually, one is more prevalent than the other.

Almost always misidentified as largemouth bass because of similar appearances, the spotted bass is also known as a Kentucky Bass or “spotty.”

The cylindrical fish varies in color from light green to light brown and can be told apart from its larger cousin with spots along its stomach and a solid dorsal fin.

Found primarily in the southeastern portions of the United States, the spotted bass will dive deep when hooked as opposed to their largemouth cousins, who will run for the surface.

Many other species of black bass are prevalent in the United States, rounding out the family with names such as the Guadalupe Bass found exclusively in Texas in GtheThe Guadalupe river.

The Choctaw Bass in Florida, which was just recently classified as its species, has the possibility of many more waiting to be discovered on their own.

The Other Bass Species

The black bass family is not the only family of bass that roams the waterways of North America. Several popular sports fish belong to the temperate bass or other bass clans here in the US.

Many East Coast anglers have attempted to or caught striped bass. One of the most popular and sought-after species in North America is the striped bass.

With characteristics that make up the ideal sports fish, these predators are aggressive, powerful, and prominent. They spend most of their life in salt water, striped; striped bass has been known to migrate inland for reproductive purposes.

The Chesapeake Bay and its pollution has become a concern for ecologists, who worry that the striper’s spawning may be affected.

They’re also highly overfished in this area, which has led several states to terminate trophy striper seasons as a precaution to prevent them from entering onto the critical or endangered list. These closures are believed to benefit the striper population and return them to their usual numbers.

Striped bass or stout fish have continual horizontal stripes numbering seven or eight on either side. They come in shades of blue, black, olive, or green and have an iridescent underside.

White Bass or freshwater relative of the striper, that aren’t considered sports fish by fisherman but still make the bass list. Nowhere near as cunning or aggressive as their cousins, these are fast or relatively easy for any novice or junior angler to catch.

They thrive in large bodies of water such as lakes and reservoirs and enjoy swimming in the deeper parts of crystal clear water, usually below the 10-foot mark.

A fish commonly found in schools, anglers who catch one have probably stumbled upon a large congregation and have a strong likelihood of seeing more.

With mixed reviews as to its flavor profile, some enjoy its unique taste while others prefer to stay well away. The best way to find out where you sit on the spectrum is to catch one and let the fish speak for itself.

Distributed throughout the United States but heavily populated in the Midwest, the species is mainly a silver-white to pale green with a dark back and light underbelly and sides. Lateral stripes run their length, similar to largemouth bass.

Said yellow bass or quite possibly the smallest members of tempered bass families, and when caught, don’t put up much of a struggle.

Weighing more than a pound, this is the perfect pass for novice fishers and children looking to get into angling. Fished more for their taste than their ability to put up a fight, yellow bass is far more delicious than stripers.

More importantly, they are not nearly as overfished as their cousins, making them an excellent choice for those concerned with not negatively impacting the environment but still putting a hearty meal on the table.

With a yellow belly and lateral stripes running along, this bass’ dorsal fin is separated into two. Its population is primarily centered around the Mississippi River. However, it has been introduced as far west as Arizona and far east as Mississippi.

Other temperate bass include European sea bass, white perch, which belongs to the same family as stripers, and a handful of other temperate Basses worldwide.

Sea bass is a term that refers to bass that is “not bass” but is prevalent and has particular habitat requirements to earn this name.

Though this fish belongs to the genus grouper, it could be found from Texas to Maine, hanging around peers and reefs. Black sea bass are caught primarily for their flavor profile, but they put up quite a fight no matter what tackle is used.

Though the origin of the black sea bass name remains a mystery, it is not related to the white bass or European sea bass.

With an oblong, compressed body, this fish comes in a dusky to smoky grey color that is darkest near the dorsal fin and fades towards its underbelly.

It has longitudinal stripes along its body. It is found throughout the western Atlantic ocean, the Gulf of Mexico, and even into the Mississippi Delta.

Because of the dark bodies are often mistaken for black bass, peacock bass, or their species. Chiclets, related to tilapia, these peacock Bass bring to bear ferocities in the water matched by any fish their size.

Most frequently found in the United States and imported to combat the spread of tilapia in Florida, these bass are ravenous and will consume nearly anything they can take a bite out of. They are the state of Florida’s most popular game fish and almost look like something out of a movie.

With over 15 species known to date, peacock bass are incredibly colorful and recognizable by their spots or stripes, gold-rimmed, and bright tail resembling a peacock given its spot.

The term bass is thrown around quite often to refer to various types of fish. Some, like the Chilean sea bass, are sought after for their high-quality flavor profile.

It sounds like the giant sea bass or endangered, while others have earned their moniker for their fear in battle and prized reputation as a game fish.

Though this is not a complete list, it accounts for most of the common species around North America.

Armed with the knowledge of not only which species may be in your area but also what their habitat preferences are, and food preferences, you have better chances of catching that bass.

The ability to distinguish the species by sight alone is a piece of mental gear that every angler should have in their tackle box. As always, good luck and stay safe out on the water.