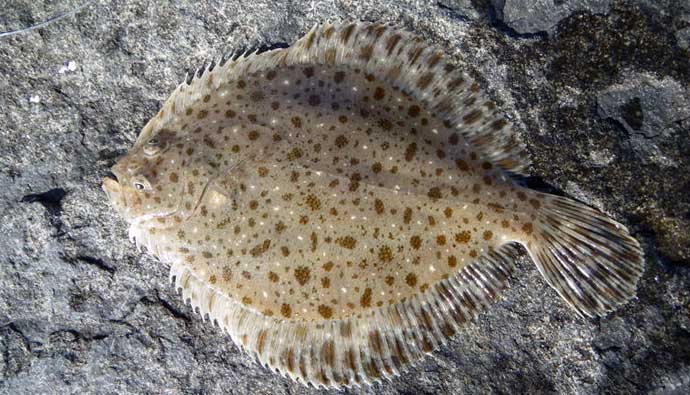 I get asked a lot, what is a flounder?

Irrespective of the species of flounders, they are bottom-dwelling flatfish that have compressed bodies. A marked characteristic of this fish is that both of its eyes are on one side of the head.

It is a demersal fish that is found at the bottom of oceans around the globe but some can also be spotted in estuaries.

Let’s learn more about the various types of flatfish!

The common names of flounder are actually used for several distantly related flatfish species but all of them belong to the suborder Pleuronectoide. Here are some common species of this flatfish you should be aware of:

Identification – The gulf flounder is olive-brown in color and it has three spots which form a triangle over its eye side. It has numerous white spots across the body and fins and it can change color to match the bottom.

Distribution – This flat fish can be found from Cape Lookout, North Carolina to Texas as well as southern Florida and the Bahamas.

Size and age – The gulf flounder can grow up to be 15 inches long and can live for 3 years.

Habitat – Inhabits sand and coral rubble and seagrass that lie near the shore. Some can also venture into tidal reefs.

Identification – The southern flounder is light to dark olive in color, has dark splotches and spots which disappear in larger fish. It has fewer fill rakers compared to the southern flatfish.

Distribution – Can be found from North Carolina to northern Mexico.

Size and age – Mature adults can grow up to be about 36 inches long and can live up to 20 years.

Habitat – Can be found in inshore channels, estuaries, bay mouths and even freshwater. It can also be found in waters that have high salinity.

Spawning season – Southern flounder spawn in offshore waters by moving out of bays and estuaries in the fall when the temperature drops.

Food – Shrimp, small crustaceans and small fish such as mullet and anchovies.

Identification – The starry flounder can be both left and right-eyed. It has a pointed head and smallmouth with a square caudal fin. Like most flatfish, it is olive to dark brown in color.

Size – Can grow to about 12 to 14 inches in length but some can also grow 3 feet long and weigh about 20 pounds.

Habitat – This firm white fish can be found near shore over mud, gravel and sandy bottoms. It often enters fresh or brackish water and can also be found 900 feet deep.

Spawning season – Starry flounder spawn in later winter and early spring in the waters of California.

Size – The summer flounder can grow to about 5 pounds in weight and 23 inches in length.

Habitat – Prefers sandy and muddy bottoms and is common in harbors, estuaries, creeks, canals, and shorelines. It prefers the shallows during the summer month and moves offshore in winter to deeper and cooler water.

Identification – This flounder is round in shape with a pale white blind side. It has several dark brown spots across its body and fins.

Distribution – Can be found along the northwest Atlantic continental shelf to northern Florida.

Habitat – Fish for this flatfish in about 150 feet of water or deeper.

Spawning season – Spawning occurs from late spring to autumn but it peaks in July and August on Georges Bank.

Identification – The winter flounder has an oval and flat body and its color range from reddish-brown to dark brown. Some have small, black spots on their body.

Size – Most winter flounder grow to be about one or one and a half pounds and rarely grow more than a foot in length. At most, the flounder can grow to about 2 feet and weigh 8 pounds.

Habitat – Winter flounder are usually located inshore in coastal areas from the Chesapeake Bay to the Gulf of St. Lawrence.

Spawning season – As is apparent from the name, the winter flounder migrates to spawn in the winter. Adults move into estuaries in fall before the spawning and also migrate in spring and summer to cooler parts of estuaries.

How to Catch Flounder

HOW TO CATCH FLOUNDER EAZY WITH GULP

Flounder can be quick to flee when they feel threatened so use the lightest tackle you can get and a fluorocarbon leader that is about 20 pounds. The fluorocarbon line that is attached to the leader should be able to withstand 10 to 12 pounds as well and the rod should be light enough to sense slight bites.

That’s because flounder rarely swallow bait whole and the first bite will feel like a small tap which can be easily missed by anglers who use heavy tackle.

However, wait a few seconds before setting the hook. This flatfish will flee at the first signs of a threat and will burrow in the sand. If you are fishing for flounder under mangrove branches or docks, use a spinning tackle so that you can use the drag system to tire out the fish.

How to Clean Flounder

Cleaning a flounder doesn’t have to be difficult. Check out this guide for cleaning flounder the easy way!

Fillet a Flounder in Under 15 seconds!! | Chasin' Tail TV

Q: Does flounder have scales?

A: Flounder does have scales but they can be removed easily which makes it a kosher fish.

A: Flounder has a sweet taste and delicate texture which makes it perfect for people who want to try fish for the first time.

Q: Why do flounder have eyes on one side?

A: Juvenile flounders have two eyes on either side of the head but as it grows one eye migrates to the other side. This happens so that the fish can camouflage itself on the bottom of the ocean floor and thus remain safe from predators.

Did these flounder facts excite you? Use these tips and information as guides to catch your first flatfish and share your experiences in the comments below.

In fact, if you already have some stories to share about fishing for this fish, we would love to hear them here and do share this guide if you liked it.