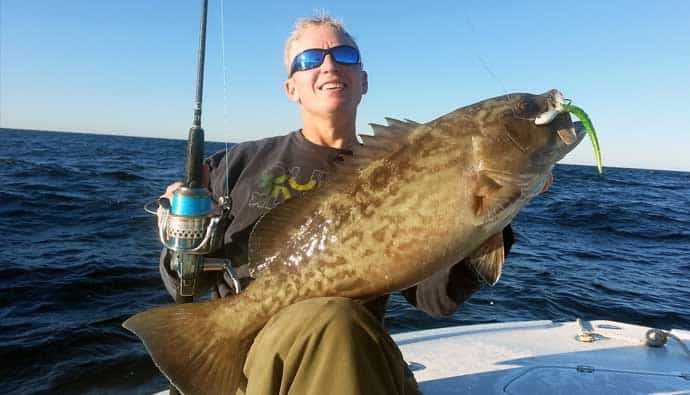 Groupers are a species of fish that belong to the Epinephelina subfamily of the family Serranidae. As teleosts, all types of grouper have a stout body and a large mouth and are weak swimmers. However, once caught, a grouper will put up a vicious fight and use their vast bulk to full advantage.

Here are a few common types that you may encounter and what you need to know about each to increase your chances of getting a large catch. The fish in this species are hermaphrodites i.e., they mature as females and can turn into a male later on. The male differs from females in appearance, as well. Plus, grouper fish size matters when it comes to fishing gear and tactics.

Identification – The head and body of this grouper species is a dark reddish-brown. It also white spots on the sides and a red underbelly.

Distribution – This grouper can be found in coastal areas in the Western Atlantic Ocean, including the Gulf of Mexico, and is abundant in Florida.

Size and age – The red grouper can grow to up to 50 inches in length and can weigh about 51 pounds. It can live for 20 or more years.

Habitat – Red groupers remain in inshore waters for five years before relocating to offshore hard-bottomed habitats, which are often edges of the continental shelf.

Spawning season – This grouper spawns between January and June, and the season peaks in May.

Identification – This grouper is brownish-gray and has dark, worm-like markings on the side. It has dark fins and tan lines that radiate from the eyes. It is often mistaken for the black grouper.

Distribution – The gag grouper can lives in the Western Atlantic Ocean, the Gulf of Mexico, and the Caribbean.

Size and age – This fish can weigh more than 25 pounds and can grow to about 36 inches in length.

Spawning season – The gag grouper spawns year-round, but spawning activity increases between January and May.

Food – Feeds on smaller fish and invertebrates such as crabs and shrimp deep under the water.

Identification – This giant fish is olive or gray, and it has large, black, and brass-colored spots.

Distribution – The black grouper live in the western Atlantic Ocean ranging from Massachusetts to north and south Brazil. It is abundant in the Florida Keys, the Bahamas, and the Caribbean.

Size and age – This grouper can weigh a whopping 220 pounds. Goliath grouper size can reach 5 feet, and it can live for 40 years.

Habitat – found along rocky bottoms and in coral reefs 19 to 108 feet below the surface of the water.

Spawning season – This fish spawns between May and August.

Identification – This giant grouper is large, thick and elongated, has a round snout and small eyes, and a fan-like tailfin.

Distribution – Can be found in the Florida Keys, the Bahamas, and most of the Caribbean.

Size and age – As the biggest grouper, the goliath can grow 8 feet long and can weigh as much as 790 pounds. It can live close to 40 years of age.

Habitat – Can be found in shallow tropical waters among artificial and coral reefs 15 to 164 feet underwater.

How to Catch Grouper

Irrespective of the types of grouper you wish to target you can catch large ones with lures, live and dead bait. If you are casting in the shallows, use jerk bait and retrieve it erratically to lure the fish out in the open. You will need heavy tackle, especially if there are a lot of rocks under the water where you are fishing and a braided line that can withstand the powerful pull of a caught grouper.

If you are using spinning tackle, make sure that the reel is heavy enough to withstand an 80 to 100-pound test mainline and a low gear ratio to give you more control. This tackle will come in handy when the panicking grouper fish tries to swim under a ledge to break the line.

For live bait, use pinfish, grunts, blue runner, sardines, and mullet. Take a selection of these with you so that you can give the fish a full menu. Bridled bait will set in nicely in the mouth of a giant grouper.

Why is the warsaw grouper endangered?

The warsaw grouper is critically endangered out of all of the groupers because of overfishing or bycatch release. It is also a protected species. The Nassau grouper is on the conservation list.

Why is the snowy grouper called a deep drop fish?

The snowy grouper is called that because it inhabits deeper waters than other grouper types (350 to 600 feet).

The grouper is a lean and moist fish that has a mild flavor, and the flesh is firm and flaky. Out of all the groupers, the gag grouper are caught commercially as a table fish.