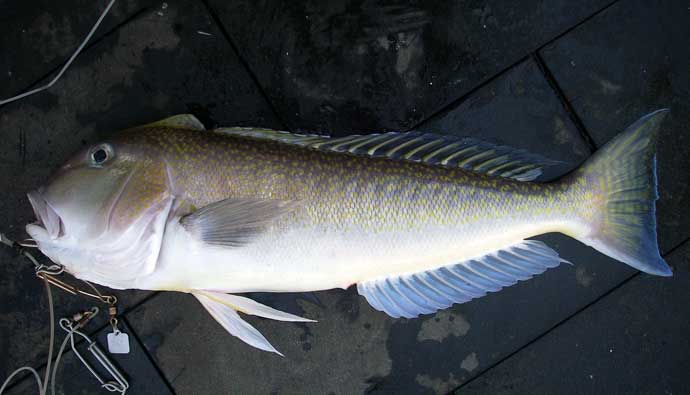 Tilefish are a fun fish to catch by dropping a lead weight down with some dropper loops and bait.

But, before you go out, it’s helpful to understand the different types that are waiting for you.

That’s why we put together this quick guide to help you identify a few of the different species of tilefish, how to catch, and even how to cook them.

Good luck out there!

These perciform marine fish are also called the amadai fish, and they belong to the Malacanthidae family.

This fish can be found in the mid-Atlantic coast of the United States and the Indian Ocean, depending on the species you wish to catch. Many can be found swimming around the reefs, while some species are marine. The blue blanquilo is known for inhabiting brackish waters. The largest species can grow to be about 35-and-a-half pounds in weight.

Identification – As the largest species of tilefish in existence, the golden tilefish or the great Northern tilefish has a blue-green back and it has several yellow and gold spots. It is easily distinguishable from other types of tilefish because it has a large crest on its head that the other species lack.

Distribution -Golden tilefish can be found throughout the Gulf of Mexico and in the waters of the Atlantic. This also includes waters around Florida and Nova Scotia.

Size and age – Golden tilefish can grow to about 38 to 44 inches in length and can live for more than 40 years.

Habitat – Golden tilefish can be found 250 to 1500 feet underwater swimming around submarines canyons, steep muddy slopes, and along the ocean floor.

Spawning Season – Golden tilefish spawn from March to November in the Atlantic and in the Gulf of Mexico the fish spawns from April to June. The numbers are declining because of overfishing.

Identification – This tilefish gets its name from the blue outlined golden stripe that runs from its snout to the base of its eye. Most of the body is colored olive-gray and it has a white bottom. This is why it is also known as grey tilefish.

Distribution – To catch this fish you have to head to Virginia and the Gulf of Mexico. However, most of them are off the mid-Atlantic coast along the United States.

Size and age – This tilefish can grow to about 35 inches in length and can live for 43 years.

Habitat – This fish swims about 250 to 800 feet underwater in temperatures that range from 59 to 73F and it can often be found near the ocean floor.

Identification – Yellow tilefish are an iridescent yellow in color and are quite small and delicate.

Distribution – Can be caught around Australia, in the East Indian Ocean, the mid-Atlantic in the United States, waters around Indonesia and in the Central and West Pacific.

Size and age – This small fish rarely grows more than 5 inches in length and can live for 40 years.

Habitat – You can catch this fish around reefs deep underwater. A shallow bay is far from where you should be looking.

Identification – The purple tilefish is a deep lilac in color and it has dark crimson/red V-shaped mark on its tail.

Distribution – This fish is usually in the western Central Pacific Ocean

Size and age – This species can grow to about 5 inches in length like its yellow cousin and can live for as many years with care.

Habitat – found swimming 98 to 278 feet under the surface and along rubbly outer reefs.

Spawning season – This fish spawns well in an aquarium as long as it has a mate.

How to Catch Tilefish

Tile fish are fun to catch offshore and there are many ways you can go about it. One of the easiest ways is a dropper loop rig with one or two hooks.

Here’s a great video that shows you how to catch them easier. 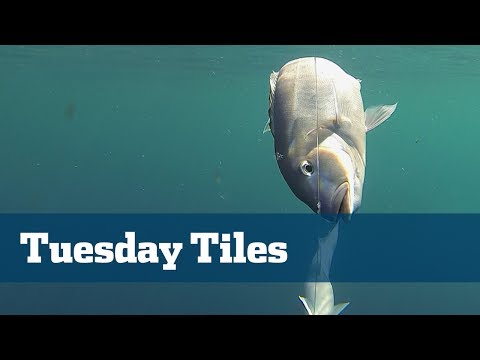 How to Cook Tilefish

Tilefish are known for their firm white meat and delectable flavor. Here is a recipe that you can try out:

Q: What do tilefish eat?

A: The fish usually feeds on small benthic invertebrates such as shrimp and crab.

Q: Which species can be found in Florida?

A: The Golden and Blueline tilefish are abundant in Florida.

Q: How much can the largest tilefish weigh?

Q: What is the flavor of tilefish?

A: The flavor profile of tilefish is delicate and sweet. The flesh is akin to the flavor of lobster meat.

Q: Which tilefish is endangered.

A: The Golden Tilefish is currently in danger of extinction because of overfishing.

Q: Which tilefish has the highest mercury levels?

A: Larger species have higher mercury levels because they have more time to accumulate it.

Q: Can I catch this fish in a bay?

A: Most tilefish are found deep underwater near reefs and underwater canyons so chances of finding one in a shallow bay or even a wide bay are slim. Look for the larger species in the mid-Atlantic ocean by taking a boat out.

Q: Which fish does this species resemble the most?

A: Tilefish are similar in appearance to species in the sea bass family.

A: This program is a catchshare program in the US for tilefish which determines catch limits for fisheries.