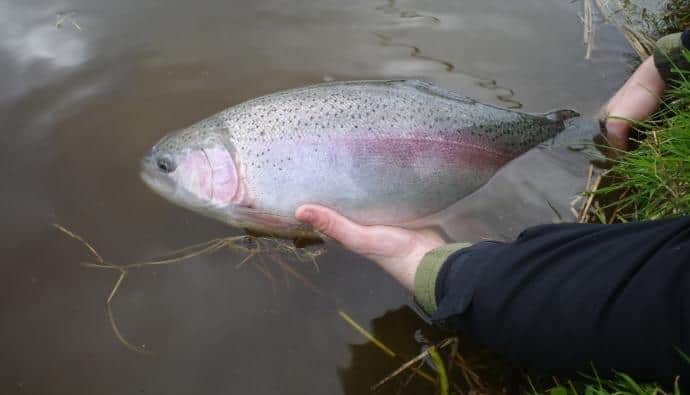 Trout are undoubtedly one of the most popular species of freshwater fish in North America. Trout are popular for a number of reasons which include their explosive power and stamina, availability and easy accessibility, as well as their delicious taste as food.

Apart from these qualities, one attribute that makes trout stand out as a special species is their variety. There are diverse trout species available to anglers all around North America.

In this article, we will discuss types of trout as well as how to identify them.

As an angler who specializes in trout fishing, it is important to be able to identify the different species of trout in order to handle them properly. We have classified the common trout species found in North America below.

The most common type of trout found in North America is the rainbow trout. If you are a trout fisherman, there is a very high chance that you have caught while trout fishing. Rainbow trout get their name from the pink stripe that appears horizontally on their side.

Other unique characteristics of rainbow trout include their square broad tail and black spots all over their body. Rainbow trout are further divided into subspecies with some of the popular ones including steelhead trout, redband trout, and golden rainbow trout.

You can find rainbow trout in Alaska, Mexico, along the Pacific Coast, as well as the Great Lakes, Georgia, Alabama, and Southern Canada.

Just like rainbow trout, cutthroat trout are named after their appearance. Cutthroat trout have a red coloring under their lower jaw, which makes it appear like they are bleeding from their throat.

Golden trout is named after its appearance, as they usually have a gold color with reddish-orange stripes on their side and dark spots on their rear. Golden trout are among the smallest trout species available in North America.

They are known to feed on surface insects and crustaceans like freshwater shrimp and territorial insects. Golden trout feed during the period between May and September, when these insects are usually available.

Golden trout can be typically found in high-altitude rivers and freshwater lakes in mountainous regions in the Western United States. This includes cities like Idaho, Wyoming, California, and Washington.

Brown trout is a European trout species that was brought to North America from Germany. Even though they are called brown trout, this trout species is not always brown. Their color may vary from silver to golden, depending on their habitat.

Despite the difference in color, brown trout have common characteristics that make them easily recognizable. They usually have reddish-orange spots with silver rings around them. Brown trout also have a salmon-like appearance, as they are closely related to the Atlantic salmon.

Brown trout are categorized into subspecies based on their habitat. Brown trout that live in rivers and lakes are called river trout and lake trout. Anadromous brown trout on the other hand are called sea trout.

You can find brown trout in British Columbia and Alberta in Canada, and California and Colorado in the United States.

Lake trout is a trout species that belongs to the Char family, being the biggest of them. Not only are lake trout big, but they are also deep water fish.

Lake trout are notable for their size but that is not their only unique feature. They also have creamy spots on their skin as well as a forked tail which makes them easy to spot. Lake trout have a lot of nicknames that include Mackinaw,  Togue, Grey Trout, and more.

You can be sure of finding lake trout in the Northeastern part of the United States, as well as the Great Lakes, Alaska, and Canada.

Brook trout are commonly referred to as mud trout or speckled trout. This is because of the white edges on their lower fins, and worm-like markings on their head and back.

While brook trout are native trout from North America, they can be found around the world today in places like Europe, Australia, and New Zealand.

Brook trout is typically small and can be found in clean and cold habitats, as they need a high level of oxygen to survive. You can find brook trout in the Great Lakes, Arctic Sea, and the Appalachian Mountains.

Bull trout get their name from their large head and mouth. They have olive coloring with red and orange dots on their sides. You can also find a white leading edge on their fins and yellow spots on their back.

Bull trout are rare fish that can be found in water bodies in the Pacific Northwest.

Dolly Varden trout have migrated through the Pacific Ocean and they can now be found in Japan and Siberia.

Tiger trout and splake are trout hybrids which is why we have classified them together.

Gila trout and Apache trout have two major similarities. They are both threatened species of trout and get their names from the location where they inhabit.

Trout fishing is an interesting and enjoyable form of fishing, particularly when you know what you are dealing with. This is why it is important to familiarize yourself with the different trout species available in North America.

It is also important to determine if you are dealing with a wild fish or stocked fish when trout fishing. Additionally, it is crucial that you find out the local rules and regulations that apply to a certain location. This will ensure that you fish safely without endangering any trout species.