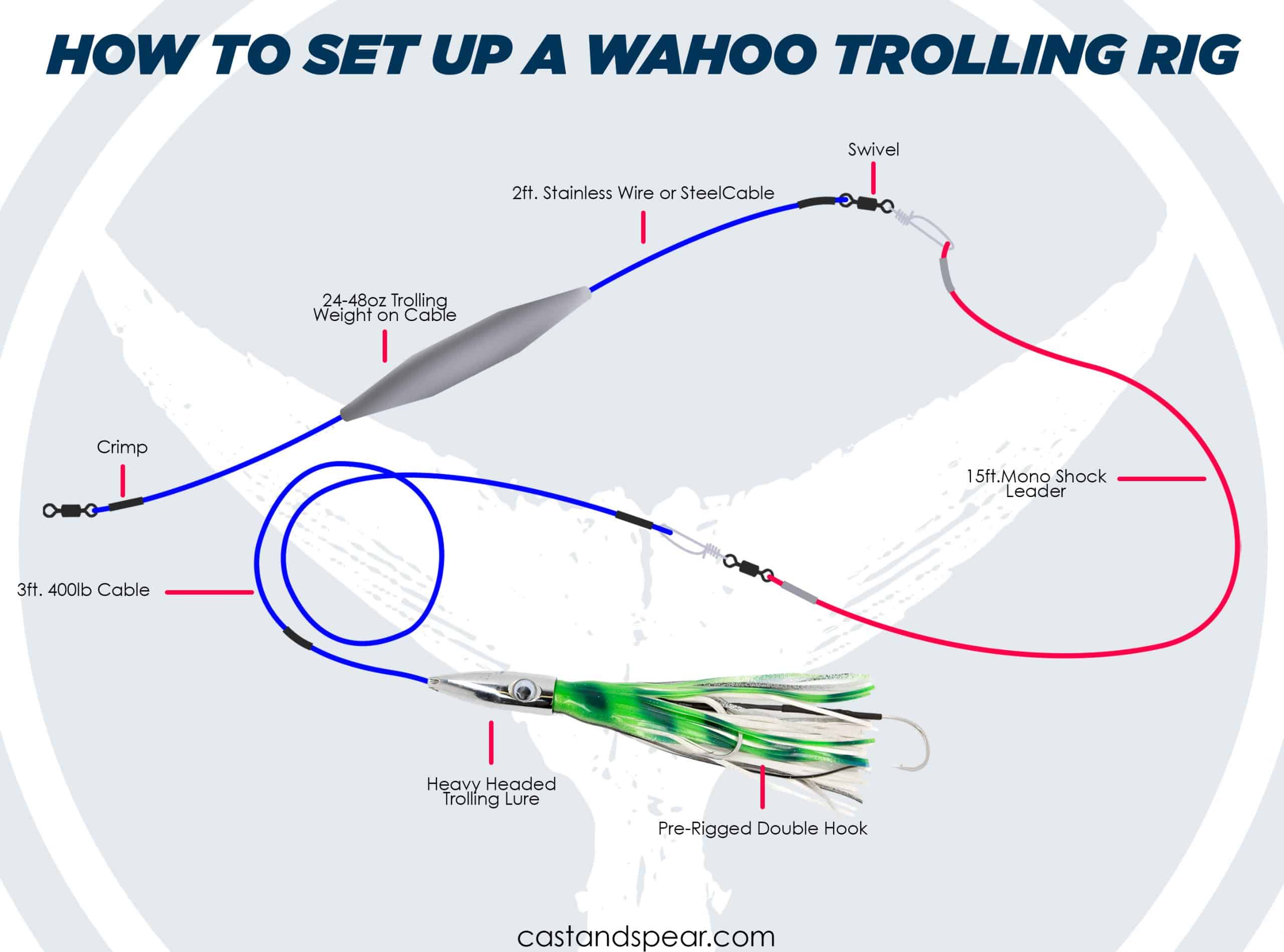 Wahoos are one of the high-speed fish in the sea, which makes them irresistible for competitive anglers. Shaped like a torpedo, the fish can catch up to lures traveling at 18 knots and more! High speed wahoo trolling with wahoo rigs is the best technique to use for these speedy fish.

Wahoo fishing is an art form that anglers have to perfect with practice. An aggressive fish with a hard mouth, hooking it is easier said than done.

Plus, even if you manage to hook one, you need to keep the line tight. Otherwise, the fish will take advantage of any slack it discovers and will toss the hook with violent shakes of its head.

The subsequent are a few of the best lures for high-speed trolling for wahoo:

The Yo-Zuri’s Bonita wahoo lures, a high speed wahoo trolling hard bait, features a smooth scale side pattern and color-changing technology on the top. It also has a streamlined body and stainless steel, flat hooks, and a steel ball bearing that features swivels.

Known to be one of the sturdiest trolling lures in the market, the Bonita is quite versatile in usage. You can fish the lure either right behind trolling leads or from the rod tip. Plus, it can withstand a speed of 6 to 15 knots due to its tight swimming action, which prevents damaging it.

Ideal for large and aggressive fish such as wahoo, swordfish, and tuna, the Bonita lure should be part of your trolling rigs. It comes in several color patterns so you can purchase ones that can suit your accustomed fishing conditions.

The Blue Water Candy Jag-A-Hoo wahoo trolling lures should be a part of your rig if you are wahoo fishing.

Inspired by the ‘wahoo bombs’ of the West Coast, it features a swivel that mounts to a hook that allows a blade to rotate right behind the bait. This adds vibration and flash, which deep water fish such as wahoo, cannot resist.

Jag-A-Hoos make use of the original head of the Blue Water Candy Jag wahoo lures, which have been used by anglers for years to target this speedy fish. The skirt has been shortened in this variety to align with the hook’s bend so that the spinning blade remains clean.

Jack-A-Hoos wahoo lures design can withstand the hard mouth of aggressive wahoos. A single lure is rigged on a 275 lb cable and features a 900 lb solid ring and an 8/0 Mustad hook.

Instead of skirts made of hair, this lure has a flashy material as a dressing or Mylar. It is strong enough to withstand multiple fish strikes and flashy enough to make them keep trying.

The wahoo trolling lures can be used to attract wahoo swimming at over 12 to 15 knots. A fixed crimp right on the leader in front of the lure heads also increases casting distance.

Creating rigs for wahoo is a hotly contested topic, especially for tournaments. Renowned Florida Keys guide, Capt. Jimmy Gagliardini is an expert in offshore, wreck, and reef fishing. However, his claim to fame is due to his big-game fishing skills, which involve wahoo.

The veteran angler has perfected a rig with a highly successful catch rate for this speedy fish, whether it misses the hooks or tries to shake itself off. Known as the Gagliardini Grabber, the trolling rig is boat-friendly. It can be for small to mid-sized boats and is suitable for traditional trolling speeds.

This rig offers a unique advantage in the form of two separate stinger strands that swing freely along the baitfish body you use. Wahoo is notorious for throwing hooks off using aggressive head shakes. When it does this, at least one of those hooks will dig in deep and stay there no matter how hard the fish struggles.

Just make sure you are careful. Those razor sharp teeth and hooks can do a lot of damage if you don’t keep an eye on them.

Wahoo typically strikes the back half of the bait. With this special rig, those strikes can turn into successful hookups.

To make this setup, hold the stinger strands off to the small baitfish’s side and insert the lead hook into the throat. Then, work the bait onto the shank and pull out the point through the bait’s belly.

Then pass the wire leader’s tag end through the baitfish’s lower jaw and out through its upper jaw. Secure the bait by threading the copper wire through the eye socket and make several wraps right behind the pin and then around the jaws in front of it. Make a few more wraps around the wire leader.

After that, slide the lure on the leader. Use a small haywire twist to make a loop at its end for the snap swivel. To prevent the lure from tangling, trim the skirt in front of the stinger hook, and you are done.

Tips and Techniques on Wahoo Fishing

Follow these tips to increase your possibility of catching big wahoo:

What is the best wahoo lure?

The type and color of the lure should depend on the clarity of the water you are fishing in as well as the speed of the current. Try the Yo-Zuri Bonita Wahoo Lure.

What size hooks for wahoo?

An extra strong, 2/0 short shank treble hook is considered to be sturdy and sharp enough to hook the hard jaws of a struggling wahoo.

How fast do you troll for wahoo?

Are wahoos hard to catch?

With speeds that clock in at 60 mph, your reel will literally start ‘screaming’ once you hook a wahoo. The powerful fish can be naturally difficult to catch if you don’t have the appropriate equipment or strength to withstand the struggle.

What are the best places to find wahoo?

You can find wahoo in the waters around Northeast Florida and off the coast of Louisiana. These are warm enough for the fish to thrive. You may even find some decent-sized yellowfin tuna and kingfish in those areas which you can catch by baiting with cutlassfish.

Is wahoo healthy to eat?

Yes and no. The fish is a healthy source of lean protein and is exceptionally rich in saturated fat and sodium. It also comes with a lot of vitamin B6, B12, selenium, and phosphorus. A 4-ounce serving has about 375 mg of omega-3.  However, since it’s a bigger fish it will have a higher accumulation of mercury and other toxins.