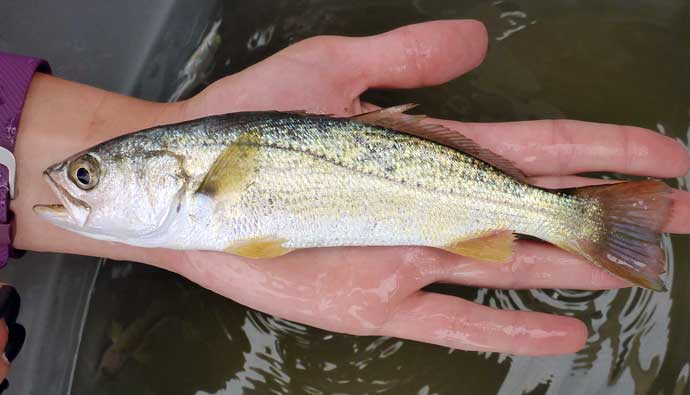 Weakfish is a slim and slender fish that visits the shallow waters in the spring and summer. It got its name from the easily torn membrane within the fish’s mouth.

While numbers have declined due to overfishing, regulations in marine fisheries are ensuring that the species does not die out. Find out more about the weakfish and how you can catch it in this guide!

Weakfish Facts: Did You Know?

Additional names for the weakfish include sea trout and gray trout, and they can be found along the east coast of North America, the Bay of Fundy, Rhode Island, South Carolina, Chesapeake Bay, and Nova Scotia.

Even though it is a predatory fish, it is also the main source of food for larger species such as the striped bass. The fish can live up to 17 years but most don’t live for more than 12 years.

It has a sleek body that can grow to about 3 feet in length. It has a silvery-white belly, and the back is dark olive/green which gives the fish an iridescent look. It also has dark spots on its back, yellow-colored fins, and two large canine teeth in its upper jaw. The lower jaw projects beyond its upper jaw.

As a predatory fish, the weakfish prey on small schooling fish (anchovies and Atlantic Menhaden). They hunt by swimming towards it and lunging with mouth wide open to gulp it whole.

Weakfish feed on several varieties of species including crabs, shrimps, mollusks, large zooplankton, and schooling fish of anchovies. It can be found in nurseries and spawning areas along the coast from Maine to Florida which include rivers, bays, and estuaries as well as Rhode Island.

One of the most important habitats for the weakfish is the waters of the Chesapeake Bay, where it spawns and thrives in brackish water as a schooling fish.

Weakfish usually spawn from April to August in shallow waters of estuaries such as the Chesapeake Bay. You can find young weakfish as zooplankton flowing with the current to reach rivers with low salinity. This will become their nursery area until they can migrate back to salty waters then join the schooling fish.

It is possible for weakfish to live for a maximum of 17 years. But this is very rare. Most weakfish can only reach 9 to 12 years of age.

Weakfishes belong to the drum family which is why males have a deep croaking sound commonly used for mating. According to a study done by the University of Michigan, the croaking sound may be used to attract mates.

As for females, they produce more eggs as they become bigger.

How to Catch Weakfish

Best Rigs To Use

The best rig for weakfish is the two hooked high-low rig since it allows anglers to present bait right to the bottom and a second bait right after and a little bit higher in the water.

You can adjust the height of the hooks according to your needs and the weakfish bait you use such as a large sandworm or piece of squid. You can also use crab as bait with this rig.

Weakfish are present all year round in South Carolina but not as numerous compared to Chesapeake Bay & northward. Weakfish stocks have been generally low in recent years due to fishing and natural mortality increasing.

Hot spots for weakfish include shallow water that is as shallow as 6 feet. These spots are right up alongside the beach and located on both sides of the bay.

However, make sure that the area you choose is near sod or grass banks if you want to find weakfish in abundance.

That’s where you can find large ones hunting for crabs and minnows. Make sure that you don’t make a sound while recreational fishing or you will scare the fish away.

Tide is also a factor when you are fishing for this species so cast your line near an inlet where the tide is strongest. Plus, just because you catch several at one spot doesn’t mean you will find more in the same place the next.

This has to do with the weather and wind condition. For example, if the wind is blowing in from the north, fish for weakfish on the south side. 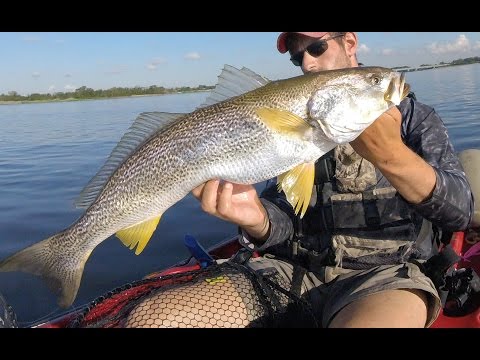 The best time to catch weakfish in a bay is during pre-dawn and dusk i.e. an hour before sunrise and an hour after sunset.

The fish does not feed till the bay waters are calm and the sun is down. You can find the fish in abundance at night.

Look for them in estuaries is during the spawning season in the spring. That is when weakfish remain in the bay and near the shore to feed after spawning.

The fish moves closer to shore during early summer so you can catch several during that time using a boat. Look for weakfish around structures that have hard bottoms, shoals, and piers.

During periods of heavy rainfall, weakfish will swim away from back bay areas and will return only when the dry weather returns.

Don’t let the name fool you. Weakfish are far from weak and will put up a fight when they are hooked. When recreational fishing, use light to medium tackle to catch the fish preferably spinning gear that it cannot escape from.

Also, use a fluorocarbon leader and don’t attach more weight than you have to.

While you can use metallic artificial lures to entice weakfish, soft plastics work best especially pink ones. If you don’t have this color in stock you can use additional ones such as light gray and white.

The ideal rod for large species such as the king weakfish should be 6 feet and 6 inches long at least and be capable of medium to light action.

Keep the drag loose when you hook a weakfish or the hook may tear away from the soft mouth of the fish.

Unless you are targeting large weakfish, stick with small lures that can fit into the mouth of a smaller fish.

The lure of choice for weakfish for most anglers is a bucktail jig. Just add soft plastic bait that has legs to it and top it with a squid.

When you are looking for abundant weakfish, stick to areas that don’t have a lot of boat traffic. The fish is known for being skittish and will not bite if there is a lot of disturbance in the water.

Weakfish feed on both sides of the tide so you will only find it in moving water.

Before heading out, study tide tables so you know where you can find the fish in large numbers. A strong tide delivers food straight to the fish but you will have to scout different spots to determine which one yields more numbers.

Look out for seagulls and other birds when you are looking for bait for weakfish especially near motor-powered boats. The engine can stir up the shallows and disturb shrimp to the surface.

After You Catch One

Place your catch in the icebox immediately, fillet it as soon as you get home and refrigerate it. It should remain in good condition for a few days.

Bleed the weakfish as soon as you reel it in by running a sharp knife along with the gill plate.

How to Cook Weakfish

Here’s a step by step guide to cook weakfish.

This species of fish has a mild taste that is similar to trout. The meat is white, lean and textured.

Weakfish have weak mouths thus the name and cynoscion regalis is their scientific name.

What additional information is there about this fish species that are important to an angler?

The best additional information you can use as a weakfish angler is to be as quiet as possible.