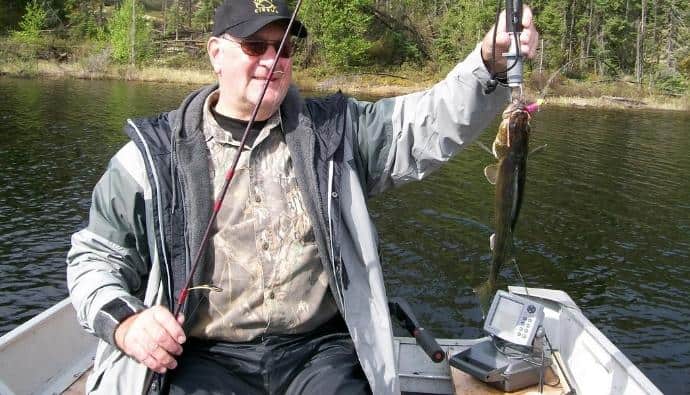 Walleye, yellow pike, or yellow pickerel are all names for a North American predatory fish that is a low-light hunter. Preferring dimly lit conditions to seek out prey, walleyes have a unique ocular setup that allows them to see well in the dark and rough waters.

Populating the deeper portions of lakes, these gold and olive-colored fish have stimulated many conversations regarding the color of lures and rigs right for catching them.

In this article, we cover how walleye see and what color is most visible to them.

Because of their sensitive eyes, walleyes have the edge over many species they prey on in low light conditions. This benefit comes in handy during twilight hours but can also persist throughout the day. Walleye tend to live in the depths. However, even these twilight creatures have difficulty piercing the blackness of the water beneath snow-covered ice at night.

While it is often assumed that a walleye’s excellent vision is due to its large pair of eyes, it is actually the cone cells in the retina in the rear of the eye which help distinguish colors and discern patterns that make these aquatic predators so lethal in low light conditions.

A walleye’s vision is heavily color-centric, centered on the color spectrum’s greens, reds, and oranges. Their sensitivity to colors outside of this spectrum is poor, making it difficult for them to tell colors such as blue and violet apart even in the best of conditions.

Their color preference is as follows:

Walleye also cannot see ultraviolet light, despite the fact that it occasionally may make lures more fluorescent. This only occurs when a lure is painted in fluorescent paint.

However, this is not a major factor for walleye, as the covering of ice and snow over many of the waters they inhabit makes it difficult for UV light to penetrate to the depths where they hunt.

In addition, phosphorescence, the chemical compound that visibly glows without an external source directly shining on it, is visible to walleye.

Note: Fluorescent requires the introduction of UV light, while phosphorescent does not require the input of UV light.

Like most predatory fish, walleye’s vision can detect movement at great distances. In well-lit conditions, this could be an excess of 50 feet, but in lower light conditions, it’s generally at about 10 feet.

1. Similar to human peripheral vision, it detects movement, and if it is potentially bait, the predator will head off to investigate.

2. At 5-10 feet, the walleye will be able to determine whether or not the shape is prey.

3. Closing inside of 5 feet, the walleye has excellent vision and is able to distinguish all features of the baitfish.

As nocturnal predators, walleye behave entirely differently at night and see a different spectrum of colors. As the sun begins to set, colors such as chartreuse, black and white stand out the best to walleye. Additionally, phosphorescent works well in attracting walleye as it is a light source that does not require UV to draw them in.

While there are a variety of baits to choose from when angling for walleye, the minnow is the most common. Shiners and flat heads or typically found in darker waters, and the silvery scales of these fish reflect the minimal light, attracting the attention of the deep-dwelling walleye.

How to catch walleye at night?

While walleye fishing can be a fun experience, it’s essential to know when and where you can find these fish. Because walleye are more active during the twilight hours, anglers will find the best fishing time for these predators as the sun goes down.

Both jigging and live bait are the best choices when angling for walleye during twilight hours. The combination of moving and colors that register on their spectrum trigger the predatory instinct of the walleye and are guaranteed to produce a strike.

Anglers should target lower levels of murky waters, which the walleye favor, with vibrant jigs to attract a walleye. Alternatively, tightening a minnow or shad can also produce a strike as the small fish’s scales refract light, and its movements alert the walleye to its presence.

Q: Do walleye like glow in the dark Lures?

A: yes, glow in the dark lures are effective for many predatory fish species, but particularly with walleye, who rely on colors such as white and black during their twilight hunting hours.

Q: What glow in the dark lures should I use?

A: Glow-in-the-dark jigs and plastics work well, but anglers can still capitalize on naturally occurring be such as minnows, nightcrawlers, and leeches.

Q: Are there colors that walleye avoid?

A: Green. Walleye avoid the color green as it indicates shallow water and the light penetrating its surface.

A: The best time of day to catch a walleye is dusk, with dawn following as a close second. The low light conditions of these two times make for optimal hunting for the walleye.

Walleye are fascinating fish with an interesting way of “looking at the world. “These primarily twilight hunters utilize low light conditions to distinguish their prey against a turbid background. With preferences on the color spectrum that causes their prey to stand out, walleye can eat well despite being very short-sighted.

Anglers who wish to up their chances of reeling in a walleye should incorporate phosphorescent lures into their tackle, stay away from the color green and incorporate motion to trigger the walleye’s predatory instinct. Jigs and minnows can both be excellent lures/baits and, with the right color at the right time, deadly.

YouTube
Articles » Freshwater Fishing » What Color Is Most Visible to a Walleye Fish?