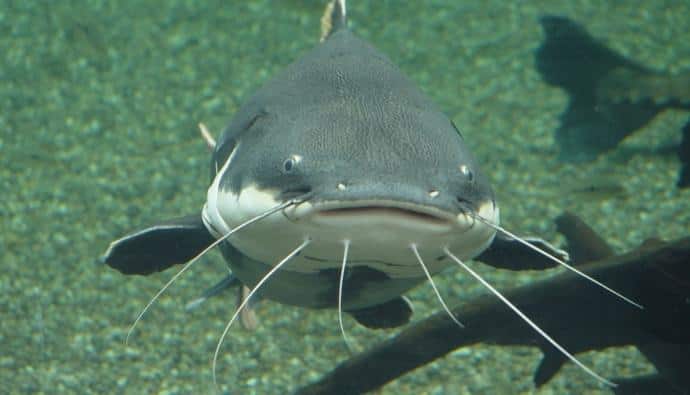 Do you ever wonder what those slimy creatures at the bottom of ponds and streams are eating?

Well, wonder no more! In this article, we’ll be looking at what catfish like to munch on. Catfish are a diverse group of fish found in both freshwater and saltwater environments.

They range in size from the tiny pygmy catfish, which is only a few centimeters long, to the massive wels catfish, which can grow up to four meters in length! Despite their size difference, all catfish share some common features.

They have barbels (or “whiskers”) around their mouths, which they use to help them find food in murky waters. They also have tough, armor-like skin covered in scales.

Whether you’re interested in keeping catfish as pets or want to know more about these fascinating creatures, read on to learn all about what do catfish eat!

What Do Catfish Eat?

Catfish are opportunistic feeders, meaning they’ll eat just about anything they can find. The food they eat depends on the different catfish species and their size. Popular fish species of the catfish include channel catfish, blue catfish, and flathead catfish.

The channel catfish is the most opportunistic feeder of the three and will eat anything, from small insects to other fish. They’re also known to eat plants and detritus (decaying matter). The blue catfish is the largest species of catfish found in North America.

They typically eat smaller fish, but they’ve been known to eat just about anything they can fit in their mouths, including ducks and turtles! The flathead catfish is the second-largest species of catfish found in North America.

While the diet of catfish varies depending on the species, there are some common foods that they all eat. These include:

But if you have a pet catfish in an aquarium, you might be wondering what the best food is for them. While there are many commercial catfish foods available, you can also give them a variety of live and frozen foods, such as:

You can also get sinking pellets or tablets specifically designed for catfish. These usually contain a mix of plant and animal proteins and vitamins and minerals.

How Do Catfish Eat?

Catfish have a unique way of feeding. They use their barbels to sense the presence of food. The barbels are loaded with taste buds and smell receptors, which help the catfish find food in murky waters.

Once they’ve located their prey, catfish use their suction-like mouths to vacuum up the food. They also have sharp, backward-facing teeth that help to keep their prey from escaping.

How To Feed Catfish?

When feeding catfish, it’s important to give them various foods. This will help ensure that they’re getting all the nutrients they need. If you’re feeding live or frozen foods, you’ll need to thaw them before feeding.

You can either thaw them in warm water or place them in the aquarium a few hours before you plan to feed the fish. This will give them time to adjust to the temperature of the water. It’s also important to avoid overfeeding your catfish.

Only give them as much food as they can eat in a few minutes. Any uneaten food will sink to the bottom of the tank and decompose, leading to water quality issues. If you’re unsure how much to feed your catfish, it’s best to start with a small amount and increase it gradually over time.

Do Young and Adult Catfish Eat the Same Thing?

The diet of young catfish and adult catfish is largely the same. However, younger catfish may need to be fed more often than adults. This is because young catfish eat more meals a day and have a higher metabolism.

As they grow and mature, their appetite will decrease, their metabolism slows down, and they’ll need to be fed less often. Adult catfish can usually be fed once a day, while younger catfish may need to be fed two or three times a day.

What Human Food Can Catfish Eat?

While catfish will eat just about anything, there are some human foods that they really enjoy. These include:

If you’re feeding your catfish human food, you’ll need to ensure that it’s properly prepared. For example, you should cook peas and corn before feeding them to your fish. Bananas, melons, and cucumbers can be fed raw.

What Do Catfish in a Lake Eat?

Catfish in a lake typically eat smaller fish, insects, and crustaceans. They may also eat aquatic plants and detritus. If no other food sources are available, they may even eat smaller mammals, such as rodents or birds.

Catfish do not feed on poop specifically, but they will eat anything that they come across. This includes decaying matter, such as dead fish or other dead animals. However, they may mistake poop for food and eat it. This is why it’s essential to keep your aquarium clean and free of any waste.

How Much Do Catfish Eat?

The amount of food that a catfish eats depends on the species and the size and age of the fish. For example, smaller catfish will eat less than larger catfish because they can eat something as big as a turtle. Adult catfish also eat more than juvenile fish.

You should feed your catfish 2.5% of their body weight per day. So, if you have a 10-gallon tank with two adult catfish, you would need to feed them 1/2 ounce of food per day.

How Often Do Catfish Eat?

It’s generally recommended that catfish be fed once or twice a day. Some aquarists believe that it’s best to mimic the fish’s natural environment as closely as possible, and in the wild, catfish would likely be scavenging for food throughout the day.

If you’re feeding them pellets or flakes, you’ll want to feed them less often since these foods are less nutritious and can cause digestive problems if the fish eat too much of them.

Can A Catfish Eat A Human?

No, catfish cannot eat humans. Catfish are scavengers and will eat just about anything they can find, but they are not large enough to eat a human. There have been some reports of catfish attacking humans, but this is usually because the fish mistake the human for food.

In most cases, the catfish will quickly realize that the human is not food and will swim away. There have been no reports of catfish eating humans.

Some catfish species will eat frogs, but not all of them do. The bullheads and channel cats are two catfish species known to eat frogs. They will also eat other small animals, such as mice and snakes. Frogs are not a natural food source for catfish, so if you’re keeping catfish in an aquarium, it’s best not to put any frogs in.

Catfish are opportunistic feeders that will consume a variety of food items, both living and dead. While they prefer live prey, they will also readily eat other foods, including pellets, flakes, freeze-dried foods, and vegetables.

Their diet is mainly composed of other fish, insects, and small crustaceans in the wild. In captivity, however, you can feed them various foods to ensure a balanced diet.

YouTube
Articles » Freshwater Fishing » What Do Catfish Eat? Everything You Need To Know!