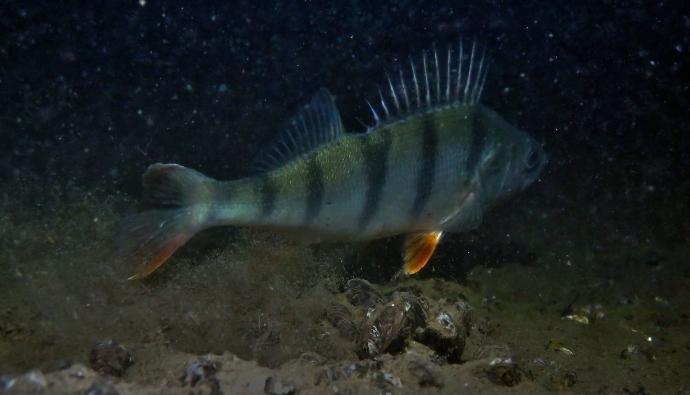 The perch are abundant in most parts of North America. You can find them in almost any river, lake or pond, thanks to their ability to adapt to different habitats.

The yellow perch is the most common species of perch. They are in high demand by anglers throughout the Northern Hemisphere.

Knowing what food is best for these species is beneficial, especially to anglers, because you get to know which fishing baits to look for before going to catch perch.

What Do Perch Eat?

Let us look at three perch species and what they eat.

What Do Yellow Perch Eat?

Yellow perch fish are carnivores that you will find towards the bottom of the waters. These perch feed on various foods, which vary as per life cycle.

North America is the main home of this carnivorous fish, and the most popular areas to catch yellow perch include the tributaries of the Atlantic and Arctic Oceans:

While young, small insects, zooplankton, and phytoplankton are the main foods for yellow perch fish. As such, they act as excellent bait for young yellow perch. Its food, however, changes to larger prey as it matures.

Larvae and bigger fast-moving insects are nutritious to yellow perch fish. They also help it to develop the skills of stalking its prey.

You will mostly find crayfish at the bottom of lakes or rivers. And although they are no longer than 5 inches, they are another delicacy for adult yellow perch.

If you are an angler who is considering catching perch, consider using small crayfish as live baits.

Tiny fish, no longer than 6 inches, are a preferred delicacy for yellow perch. In most cases, they prefer golden shiners and silver.

A big yellow perch will go for any small moving target in water, irrespective of how small it may appear.

Newts or salamanders will act as excellent perch bait. In addition, leeches are an excellent live bait for yellow perch if the weather is cold.

What Do White Perch Eat?

White perch fish usually weighs a maximum of two pounds, and they live in large numbers, making it easy for you to quickly notice or catch them.

White perch are delicious, making them a favorite catch for anglers. Here are some things they eat.

Worms are among the favorite food for white perch. In fact, many anglers catch white perch using worms than baits such as water fleas.

The best types of warms for these fish are:

Of the three above, night crawlers are the best option for any angler.

Consider a rooster tail if you are looking for artificial baits for white perch.

It exists in a variety of colors. However, white and chartreuse are commonly used. If you want a rooster tail for catching these fish, ensure it’s no more than 1/8 ounce.

Undoubtedly, minnows are among the best meals for white perch, and they are readily available in lakes, streams, and rivers. However, they are not that easy to catch.

If you plan to catch white perch, minnows are among the best artificial lures. You only require a small hook with split shots to fish them.

The good news here for an angler is that white perch would eat live and dead minnows. But the best size is those minnows, not more than 1.5 inches.

What Do Silver Perch Eat?

These fish species are omnivores. In addition to eating small crustaceans and aquatic insects, they also eat algae and plant material.

Young silver perch prefer zooplankton and crustaceans. However, their intake of algae and plant material increases as they mature.

Adult silver perch also eat artificial diets in the form of pellets. The artificial diet should contain 32-36 percent protein, vitamins, carbohydrates, and minerals. These nutrients are essential for growth and energy.

Among the perch species, yellow perch are known to be cannibalistic. During certain times of the year and in some waters, juvenile fish are the primary food for mature perch.

According to a study done after the perch’s spawning season, 25 percent of perch fry had fallen victim to cannibalism over summer.

Here are factors that influence the cannibalistic behavior among yellow perch:

Therefore, the number of available small and large perch causes variance in the cannibalistic nature of yellow perch.

Yes, mostly perch are bottom feeders. However, they also migrate a lot.

They will mostly remain at the bottom of lakes or riverbeds when hunting and feeding. This happens majorly during the coldest months of the year. Moreover, schools of these fish use underwater structures as covering and ambush points.

During the warmer period of the year, the water becomes stained. At this time, there is a lot of vegetation and perch hunts higher up.

What Do Perch Eat in Winter?

Perch are robust eaters even when the weather is coldest. However, during cold weather, their metabolism slows down. Consequently, they tend to eat little than during summer or other seasons.

In winter, perch tend to swim to the shallow waters in the afternoons to look for food. This time is perfect, especially for ice fishing anglers who have already set their traps.

Again, during winter, these fish hardly hunt at night. On the contrary, they swim to the greatest depths and are dormant until dawn.

How Do Perch Hunt?

The perch is a cunning hunter. Rocks and downed trees act as perfect hiding places for the perch. From such positions, they can quickly pounce on their unexpecting prey.

Beaver dams are also rich hunting grounds for the perch. These areas help them hide from their prey and natural predators.

Sight is crucial for the perch when hunting. As such, they do most of their hunting during the daytime when there is enough light for them to see their prey.

Unfortunately, juvenile perch generally swim slowly. Consequently, they are eaten before they can even hunt for themselves.

The perch eat small fish, crustaceans, crayfish, insects, leeches, and other living creatures. However, the perch diet changes as it evolves in age and size. Whereas the young perch will eat zooplankton, the adult perch’s primary food is aquatic insects and leeches.

The yellow perch, unlike other species, is cannibalistic. It preys and feeds on other smaller fish and fish eggs too.