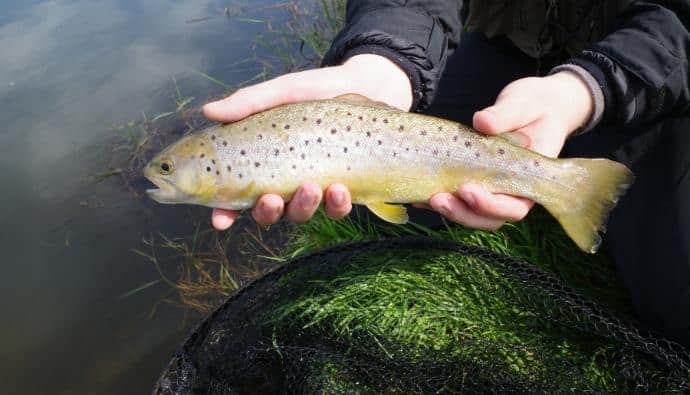 Trout is one of the most popular fish angled in America. Coast to coast, there is a variety of species of this delicious, hard-fighting game fish, each with its unique characteristics and habitat preferences.

However, most species share much of the same diet throughout North America. While some dietary differences are dictated by size and geography, for the most part, trout eat the same creatures across the United States.

This article covers what trout eat, some of the best baits to use when angling for trout, and answers a few more questions.

What do trout eat?

Trout eat a variety of things. Opportunistic predators, they can be selective in certain circumstances but will oftentimes eat the gamut from insects to algae and, in some cases, cannibalize their own young. Much of their diet depends on their location and season, but there are a few constants throughout.

If you’ve ever caught a trout, felt the contents of its stomach, and found them to be hard as if the trout had consumed small rocks, you’re not far off. Trout will eat snails as a source of protein, digesting the creature itself but unable to consume or digest the shell for quite some time.

Many anglers will be surprised to discover that the waters of their favorite fishing hole are home to crawfish. A crustacean that ranges throughout the United States, crawfish are a staple in many trout diets.

The singular species of freshwater crab living in the United States, trout, have been noted to eat the Chinese mitten crab regularly if they share habitats. However, this crab is an invasive species and has been known to consume trout eggs as a source of protein.

Freshwater crabs, while not coming to the United States, can be an excellent food source for hungry trout.

Large trout have zero problems preying on mice and small mammals. Small rodents attempting to cross the streams, creeks, or rivers are often gobbled up in a Jaws-like fashion by hungry trout.

The largemouth bass usually takes the moniker of mammal and bird eaters; large trout will eat anything they can swallow shouldn’t be prey cross its waters.

Again, this occurs more often with largemouth bass, and brown trout have zero qualms about striking small birds or baby ducks crossing their waters. Opportunistic predators, trout will not distinguish a small duck from a rodent or frog making its way across a stream.

Trouts will eat small frogs and salamanders if they exist in the ecosystem. Similar to birds and rodents, these creatures will often attempt to cross waterways with trout lurking beneath and will be ambushed by the submerged predator.

Small lizards and snakes are not only commonly eaten by trout, but the former has been used to catch certain trout alongside smallmouth bass. Small lizards can be an effective lure as they commonly prey on hungry trout.

Small fish such as minnows, shad, and other fingerling or juvenile species commonly inhabit the shallows of many other waterways that trout hunt in. These small fish, in turn, become prey to hungry trout and can even be hooked beneath a cork to angle for these voracious aquatic predators.

Yes, trout are cannibals and commonly use their own young as a food source. Juvenile trout are in danger as much from their own species as they are from outside predators due to the voracious appetite of mature adult trout.

Trout will consume juvenile eels if they share the same waterway. However, this is a two edge sword as large eels have been observed to devour juvenile trout as well.

Similar to crawfish, shrimp provide trout with an excellent source of nutrients. These protein-rich crustaceans often find themselves on a trout’s menu though much of this is seasonally dependent.

Trout will consume fish eggs, amphibian eggs, and insect eggs if the opportunity arises. These are easy sources of protein. When spawning season occurs for any of these creatures, trout will take advantage of the opportunity.

Trouts have been observed eating freshwater clams. Because trout lack the capability to crack open shells, they usually target juvenile shellfish, which can be swallowed whole.

Nightcrawlers, leeches, caterpillars, and blood worms find themselves on a trout dinner plate. Depending on the geography, species, and size of the trout, some of these worm-like organisms are staples like night crawlers and leeches. In contrast, others are seasonally dependent such as caterpillars.

Insects make up the vast majority of what trout eat on a daily basis. From small nymphs and larvae to dragonflies, a trout’s diet is largely made up of insects.

Midges and flies that seasonally appear are some of the best fly fishing baits to use during the spring and summer months.

There are a variety of baits available on the market for trout fishing. However, a few work better than others. The following is a top five list of some of the best baits for trout.

Coming in 39 different combinations of color and scent, Berkeley Power Bait is a slow-to-dissolve, moldable putty that works well with stocked trout. Scented with a proprietary blend, its unique formula causes it to float while admitting a fragrance that attracts trout like a moth to a flame.

Depending on the water conditions, anglers can choose from a variety of lineups, including glow-in-the-dark and garlic-scented options.

These preformed nuggets are easy to cook and mimic the diet of stocked trout throughout the United States. Brown granules that are easily formed into a ball and incredibly pliable, these trout nuggets are infused with a signature flavor in the aroma that is proprietary to Berkeley.

Resembling power bait in composition and buoyancy, trout nuggets may come in a singular color but attract just about every species of these picky fish. 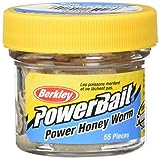 Popular with rainbow trout, this realistic bug imitation comes in various colors and 55 worms in a container.

A naturally occurring bait, anglers can source this from their own home or purchase it at a bait store. Traditionally the most common bait thrown for brown and rainbow trout, it’s been used for decades by anglers for its natural presentation yet high success rate.

Usually off-white in color, maggots will often outfish artificial baits and our best Inc. onto a pop-up rig. This keeps maggots elevated from the bottom of the water, presenting them in the water column to trout.

Note: While maggots are usually off-white, they can come in a variety of colors, usually due to their diet during their upbringing. The more colorful the maggot, the easier it is for fish to locate in the water column.

A combination of salmon egg and worm, Berkeley mice tails are a vibrant free moving concoction of grub and egg that should be a staple in any trout angler’s tackle box. Because of its similar composition to power bait, it floats.

The egg portion of the bait comes in one color, while the tail comes in a contrasting color, making for a distinct presentation in the water column. The bait’s tail presents realistic swimming motion due to its shape, while its buoyant egg portion keeps it upright, making it so that trout find it difficult to resist.

Yes, trout will eat meat in the form of small birds and mammals that attempt to pass their body of water safely.

Will a trout eat a dead animal?

Although it might consume a dead fish or shrimp, trout will not consume dead or decaying carcasses that have fallen into their body of water.

What is the best lure for trout?

Both lures and flies are situationally dependent. This means the geography, season, and species must all be factored in to determine the correct lure or fly for the particular trout.

Will trout eat other fish/trout?

As previously stated, yes, trout are cannibalistic towards their young but will also prey on the juvenile members of other fish species, including trout.

Trout are an entertaining fish to angle for, ranging in habitat from cool mountain streams to University lakes. With a wide variety of creatures on its menu, trout will eat just about anything it can fit in its mouth, its voracious appetite making up for any lack of size.

Anglers looking to capitalize on their fishing experience should pay attention to the naturally occurring bait in the area and what other species of prey may inhabit the surrounding ecosystem.

As always, good luck and stay safe out of the water.