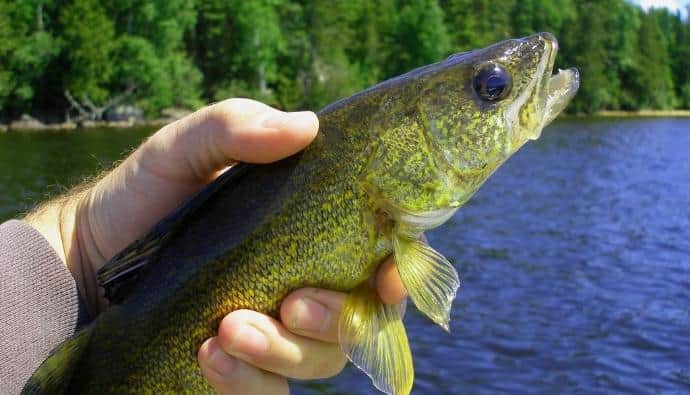 Walleye is among the popular game fish in America, targeted by most anglers throughout the year. Many walleye anglers are interested to know about their spawning season because, at this time, they have a greater chance to get into your bait, even from very shallow water.

Typically, walleye spawn in early spring between the end of March and the middle of May in the lake and river systems. The distribution of walleyes determines when the spawn will occur. They only spawn once a year, particularly at nighttime.

Different fishing reports indicate that you cannot lose a catch at this time. Here you will learn more about walleye spawning, where they spawn, how they spawn, and the best gears to catch spawning walleyes.

When Do Walleye Spawn?

Most walleye anglers ask, when do walleye spawn? Walleye spawning time varies in different lakes and rivers in the Canadian shield lakes.

Individual lakes might have extremely varied characteristics even within the same province or state. The most important thing to know is that mating often occurs early in the year while the fish emerge from their winter hiding places.

Walleye will be migrating into their spawning locations and preparing to lay eggs when the water temperature is consistently around 40- and 50 degrees Fahrenheit. Even though it is still quite cold, a few degrees warmer than their winter water temperatures can encourage them to eat particular pre-spawn food.

During the pre-spawn period, the anglers will have a big catch as this is when walleye begin actively mating, where the larger fish are warming up and emerging from their winter slumber. It is wise to schedule your upcoming fishing trip within pre- and post-spawn periods, but bear in mind that some pre-spawning dates may occur before the fishing season is formally open.

Where Do Walleye Prefer to Spawn?

Walleye’s spawning grounds are shallow water with lots of gravel and pebbles to spread their eggs and provide hiding places for their fry. In most cases, you can observe even larger fish mating in the water 3 feet deeper, making it simple to identify the strike zone and the precise location you want your bait to land. Besides, there is more oxygen in shallow waters, which is essential for eggs’ survival.

Walleye can spawn in feeder rivers, shallow creeks, as well as the shorelines of lakes. Like some fish species, walleye breeding grounds don’t change from year to year, and walleye fry will return to their breeding grounds every year until they pass away, and the cycle continues. So, once you find walleye spawning ground in the spring, you may go there yearly for some guaranteed fishing pleasure.

How Do Walleye Spawn?

Fish in smaller groups, comprising of a female and a few males, will gather and deposit their eggs and milt concurrently in a flurry of frenzied, coordinated movements after female and male walleye are assembled and prepared for the spawning process.

The females usually lead these motions upward on the sea floor, and the males follow her in an effort to fertilize the eggs using their milt. The genes passed down to the next generation of walleye are determined by natural selection or simply pure luck.

The smaller males get to the breeding ground early enough compared to bigger females who opt to stay in the deeper water near the shallows. Here, they can wait for the water temperature to be appropriate, and the actual spawning begins without being disturbed by the numerous males.

The deeper water also gives the walleyes room to spread out in case larger predators turn up or if bad weather makes it hard for them to stay near the shorelines. After the mating process is through and the female has released all of her eggs, no female or walleye will stick around to protect the eggs.

The eggs are instead abandoned to their fate. They won’t have their parents’ assistance or protection while they hatch and struggle to survive. That is the reason why the walleye’s selection of spawning grounds is so important.

Does the Walleye Make Nests for Their Eggs?

Since walleye do not build protective nests for their eggs, they spread their eggs around the bottom. Because of this, they select bottom elements like gravel substrates or rocks such that the eggs cling to them or fall into cracks, where they will be safe until they hatch.

How Long Do the Walleyes Spawn Last?

The spawning period for walleyes usually lasts 2 to 3 weeks, although the pre-spawn stage lasts for weeks or months. During that period, almost all the walleyes in every water body will have spawned.

Essentially, spawning takes only a few hours. Males spawn and release milt multiple times with various females, while females will ultimately spawn throughout the spawning season.

Like the majority of freshwater fish, walleyes spawn once a year. That is only in the springtime, and the process is through.

When Do Walleye Species Spawn?

Walleye spawn at night because they are nocturnal predators, which means they are most active at night and in low light conditions. Typically, their mating activity lasts from dark to daybreak. However, walleye spend most of the day in deeper areas in clear cold water and move into the shallows at night.

Do Walleye Bite When Spawning?

Finding walleyes during the pre-and post-spawn season is terrific and rewarding. However, getting them to bite while spawning can be challenging and occasionally virtually impossible.

Since the fish will still be in their eating mode in the weeks before the walleye spawn, it’s worthwhile to set aside part of your time for them. Fishing for walleye is likely to become more challenging after the water temperature reaches about 45°F because the fish will stop feeding for most of the day and begin focusing on the forthcoming spawn.

On the other hand, during post-spawn walleye fishing, you can easily have a big catch. The fish is through with mating and are now focusing on feeding in open water. The best time of year to catch walleye is likely around the post-spawn period.

How to Catch Spawning Walleye

Spring walleyes usually gather near their real spawning locations during the cooler months before their annual spawning season, where water temperatures are still milder and range from the upper 30s to lower 40s. Depending on the current water temperature and the surrounding weather, they may take bait voraciously during this time.

Since the water is still cold at this time of year, the lake spawners do not stay in pretty deep water. You will be searching for fish in water bodies with depths between 12 and 30 feet, while many anglers find that 15 to 20 feet is the typical depth in various lake locations.

Try luring a shoal of walleye with a great horizontal presentation once you’ve found them in their pre-spawning regions before they’ve begun laying eggs to see if it provokes any strikes. If the fish remains lower because the water is still cold, you can employ a vertical presentation to get the attention of even the most passive fish.

The female walleye, loaded with eggs and may be more interested in the spring spawn than taking your bait, are often much less active than the male. However, you should also pay attention to the weather conditions because they can significantly impact how successful you are in your fishing. One of the best times to find walleyes eager to take your bait is a few days before a storm blows in.

What Time of Day Is Best for Catching Walleye During the Spawn Season?

Dawn and dusk are often the two best times to go for walleye fishing. The fish usually mate at nighttime and rest or guard the spawning areas in the daytime.

On the contrary, those two times in the morning and evening, precisely the 30 to 60 minutes prior to and after sunset and sunrise, can be exciting. In muddy waters, they can be caught all day long.

Always ensure you aim for walleye when there are higher chances of catching them. Whether it is spawning season or not, these times of day will enable you to catch more fish. Keep in mind that as the spawning draws nearer, the opportunity to catch walleye will get smaller.

There is various fishing gear, including reels and rods you can use to catch walleye. But the most popular is a 6-foot spinning rod that gives you better control when reeling fish and quick reaction time when they strike. A 6-pound test line should be your minimum goal; however, 8 to 10 is also a secure option.

A minnow and traditional jig are ideal when trying to target pre-spawning walleyes. Employing a 3/8-ounce minnow- or shiner-head jig gives you exceptional movement and can lure even the most resistant big fish. Another fishing gear to strike walleye is crankbaits, which are suitable for cold water fishing.

Cranks are an excellent alternative if you fish the nesting sites year-round because they are less likely to be tangled in the rocks and other natural resources that are present on the lake bottom. Besides, you can use soft baits, live baits, lead jigs, and floating jigs.

Walleye spawn in spring at the shores of the water bodies. Spawning walleye lay their eggs on rocks and gravels, where they stay until they hatch.

The water temperature is the major determinant of whether you intend to fish for walleye during their pre- or post-spawning periods. The majority of spring walleyes fishing will be most productive when water temperatures are in the mid-40s; however, the exact date may differ from state to state.