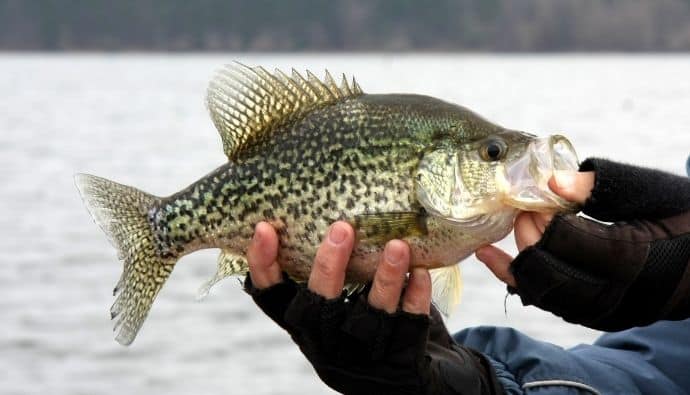 Catching crappie is undoubtedly one of the many adventures you should tick off your bucket list. Nothing beats the feeling of hitting the water with rods, poles, and a bucket.

But the excitement goes away just as soon as it comes when you have nothing to show for it after a long hard day.

To catch that tasty-looking Crappie, you need to understand the first rule of fishing – knowing when to fish. This guide will undoubtedly make you a better Crappie angler as it suggests the best time to fish for Crappie.

There is no fast and hard rule to Crappie fishing. As simple as fishing might seem, you should realize that Crappie is not your regular kind of fish. Except in spawning seasons, when they swim to the surface of the water to lay their eggs, this North American species is best caught when they’re most active.

Since seasonal changes affect water temperature, the active moments of the water animal change; thus, the blanket rule of early morning or late at night fishing might not be applicable in certain seasons.

Except if you intend to go around with a fish finder – which might sometimes be a waste of time, I think it’s best you know when to hit the lake at all seasons.

The hot summer months might not be the best season to go Crappie fishing. The water temperature is higher during this season, making the water a tad too warm for the fish. It is thus forced to move to deeper waters.

Or, in most cases, it resorts to a thermocline – a transition layer in water where the cooler, oxygen-depleted water below is separated from the warmer oxygen-rich water at the surface.

One trick to finding Crappie in summer is understanding the topography of the water body you’re about to fish in. This is one of the many seasons where electronic devices can be useful.

With the aid of electronic finders, you can locate the underwater structures where the fish might be cooling out. If you’re lucky, you might find a school of crappies cooling out together.

If, like me, you would want to avoid the stress of using finders, then you’ll have to wait for the Crappie to come closer to shore.

Since the cooler water below is oxygen-depleted, crappies, like any other fish, will have to come up for air at some point, which tends to be the break of dawn or at nightfall in summer.

At go time, you’re likely to catch Crappie at the dock or bank. You should work the shady sides of structures such as channel ledges, humps, and brush piles to enhance your chances.

After a long docile winter of surviving little or nothing, crappies become more active. You’ll find a school of fishes sporadically swimming to shallow waters to catch minnows. Bring a whole minnow bucket!

This makes spring the perfect season to catch trophy Crappie in fishing tournaments.

After scouring a vegetative nest, the female crappies pick a mate and deposit eggs. On average, crappies lay 40,000 to 180,000 eggs in the spawning season.

After female crappie spawn, the male species go in to fertilize. And then, they begin the process of defending the nest from predators. This makes it easier to catch the male species.

The highlight of fishing in spring is when water temperatures are between 56° – 60°. It’s the ideal temperature for crappie spawning.

If you’re lucky enough to find a make species, particularly around its nest, then you might have just struck gold. A school of other crappies might be right around the corner.

Catching crappies in the winter months might be a bit difficult. In cold months, the water temperature drops, forcing the fish to swim to deep water – usually at 15 and 20 ft below the surface.

Since they’ve already fed fat in Fall, winter slabs only swim to shore on rare occasions. And when they do, a weather-induced lethargy makes them feed slowly.

This means that covering the water with live bait, artificial bait, or baits of any kind will not be an effective way to draw Crappie.

At this time of the year, this North American species will be a way to find in waters with southern exposure. The water is warmer, and crappies tend to swim in schools to these areas.

This is not to say that you can’t find them in the slightly colder regions. In these parts of the water, you’re likely to find this species of fish around underwater structures. So be sure to fish around boat docks, trees, and underwater piles.

For persons who want to go ice fishing, you might want to kit yourself with sonar equipment. A combination of sonar equipment with knowledge of the water topography and possible crappie hideouts will result in successful winter crappie fishing.

Fishing for Crappie in the Fall is all about timing. If you cast your bait at the right time, it’s possible to gather a school of crappies.

Since Fall is an actively feeding period for fishes, they tend to stay pretty close to the surface more often. It is a period of transitioning into the leaner winter season. Thus, fishes spend months feeding fat on baitfish and summer forages every Fall.

Early Fall, the water temperatures are just a little below 55°. Crappies cluster in schools and begin to head for deep waters.

To make a killer hunt at this point, you should make the shade your guide. Since the temperature is still warm, crappies find hiding spots to cool off from the heat.

When Fall is in full swing, however, you’d have to change your fishing pattern if you want to have any hope of making a catch. The water temperature would have gone down so many degrees at this point. Hence, sunny sides become more ideal for crappies.

Like humans, crappies have rods and cones in their eyes. This makes it possible for them to see contrasting whites and blacks in low light. And just like humans, they can barely see in reduced light conditions.

Night fishing is not such a bad idea, especially when you know how to work artificial lightning. Usually, crappies stay 1-4 ft deep on the water surface when hunting at night. The moonlight can only brighten up to 5ft deep of water bodies.

To lure crappies to the surface, fishermen are known to float artificial lights above the water’s surface. This will draw the fish out to feed, resulting in a productive catch.

I like to believe that there is no such thing as the best time to hunt for crappies. Good crappie anglers realize that all seasons can be slab-hunting productive. All he needs to do is know when to set out and where to look. Knowledge of electronic fishing devices will also make the experience easier.

Armed with this info, I think it’s time you put on those overalls and head out to the shore.