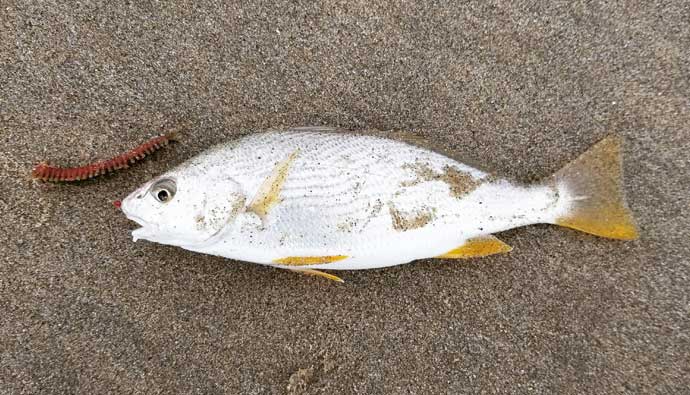 Depending on where you are these fish are fairly abundant close to shore and can be taken on a wide variety of baits.

What Kind of Fish is the Yellowfin Croaker?

Yellowfin croaker is a member of the croaker family Sciaenidae. Other croakers in the eastern Pacific include the white seabass, corbina, queenfish, and white croaker.

Yellowfins have gray, bluish, or greenbacks, a series of diagonal yellow-brown stripes, right yellowfins, and a barbell on the chin.

This species is currently found from southern California to the Gulf of California; there are old records from the San Francisco area.

Yellowfins are loosely schooling fish that usually hug the bottom. They are most common in very shallow water, often in and just behind the surf line, but they have been taken to a depth of 150 feet. Yellowfins prefer sand or mud bottoms, where they root around and feed on clams, worms, amphipods, and the occasional small fish. Yellowfins live to 15 years and mature at around 2 years old and 9 inches long. Spawning occurs from at least May-August.

In California, it is illegal to catch this species for sale. It is very important to the pier and shore recreational anglers.

How to Catch Yellowfin Croaker

These fish are great for light tackle anglers to catch along the shore.

The simplest way to catch these fish is to use a 6 to 9-foot surf rod and a spinning reel with any type of line. Whatever you have in the garage or fishing shed should suffice, but if you need a few recs, try the following.

A seven-foot Ugly Stick medium-power spinning rod will be more than enough for your yellowfin croaker needs.

I’m a huge fan of the Penn Battle II size 3000, but smaller or larger will be fine depending on what other fish you want to catch during your hunt.

I have the best success catching these using Carolina rig. I use a 3/4 oz egg weight with a small colored bead that comes off the mainline and attaches to the swivel. For the leader, I use 12-18 inch mono or fluorocarbon to an Owner red hook size 6. These fish aren’t large, so you don’t need a big hook to get them.

My top choices for consistent catches are: 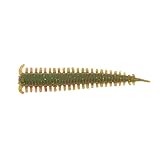 I’ve seen some people fly line anchovies in the marina, but I haven’t tried that method out yet. You can also catch them on a Kastmaster or similar lure.

How to Fillet Yellowfin Croaker

We’re fortunate to have beautiful yellowfin croaker biting along the beaches in Southern California. They truly are fun surf fish. They’re a nice big fish fillet and are really good to eat.

All right, easy to fillet. Let’s see. What do you do? How do you fillet a yellowfin croaker? What I’d like to do is get my thumb in the eyeball and my finger right inside the gill plate and then you take your knife and you just run it right down until you hit the backbone.

You hit the backbone, and then you just slide right across down to the tail. Once at the tail, flip the full fillet, and you’re going to cut all the ribs off. When you’re cutting fish, you can always take a little bit extra so you don’t have to worry about getting any bones.

You don’t want that bone inside there. Then all you do is hold your knife right on the skin, and then you kind of peel and push. This gives you a nice fillet. No bones.

It looks like a White Sea Bass fillet, and I think they taste a little bit better then you just flip over on the other side, do the same thing, finger, and thumb, which til you hit the back on, just slide your knife across the backbone. Take the rib cage, put your knife underneath the skin, and you just kind of push and pull to get a nice, beautiful fillet. And if you look at the meat, there are no worms. All nice and clean bones are all gone perfectly for a sandwich.

Key to Filleting is a Sharp Knife

The key to cutting fish is a very sharp fillet knife. A lot of people feel bad when you waste a little bit of fillet sometime, but when you can get all the bones out, and you don’t have to worry about it, sometimes it’s worth it.

It may seem counterintuitive, but a dull knife is way more dangerous. You have a lot better chance of cutting yourself with a dull knife because the knife will drag, and you’ll put your finger across it, and you’ll get cut.

Fry It, Bake It, Just Don’t Burn It

This is a great fish for fish tacos. Fry it, bake it, just don’t burn it. There’s nothing like catching a fish fresh from the sea, is there? There’s nothing better to eat.

You’re going to miss a little bit sometimes, but you don’t have to worry about it. This is where the real sharp knife really comes into play, where you get all the meat off of the skin. If you can’t tell when you’re filleting fish, if you push the knife with one or two strokes, then you’ve really got it. Every once in a while, you make a mistake, don’t worry about it.

The easiest method is to fillet the two yellowfin croakers and batter them up.

After you fry the fish, throw them in a toasted bun, win a little slaw and some ranch or sriracha dressing and get your grub on!