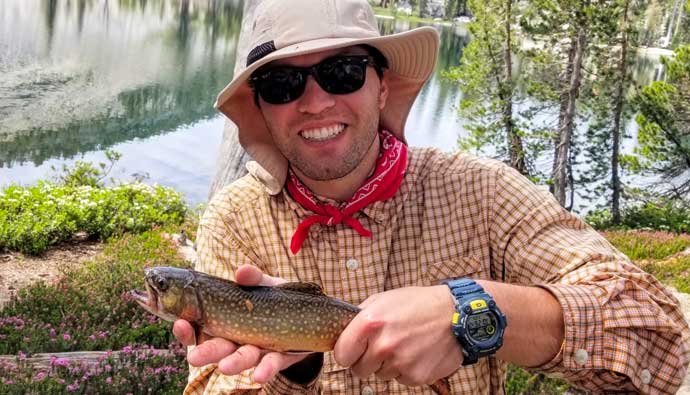 If you are a fishing enthusiast, Yosemite National Park should be on your bucket list. Located in California, the park offers a range of sport and recreational fishing opportunities for anglers of all types.

Boasting over 58 streams and several mountain lakes, Yosemite offers camping and fishing chances, the likes of which are challenging to find in the US. Some of the native and nonnative fish you can enjoy catching and release or consuming while fly fishing in Yosemite Park includes the following:

Native fish in Yosemite National Park can only be found in lower elevations i.e., from the lower Merced River right up to El Portal. Here are some you can find while fishing in these areas:

Freshwater rainbow trout belongs to the Salmonid family and can be found while fishing Yosemite National Park in Yosemite Valley, almost year-round. The fish has a streamlined body that is multi-colored, thus the name. A pinkish band runs through the entire length of the body. The underside of the fish is silvery, which eventually fades to pearl white.

Rainbow trout are carnivores. However, the park has a strict no live bait rule, so you can only use artificial lures to catch it. Plus, the fish is catch and release only so you cannot consume it or take it home with you during your fishing trip.

At most, rainbow trout can reach four in length (but don’t expect to catch that size in Yosemite) and can be found in large lakes, rivers, and small streams. Both rainbows and browns can be spotted in Merced River.

Check out our in-depth guide on rainbow trout.

Yosemite fishing enthusiasts also catch California roach in abundance. This small but chunky fish has a large head and a body that is gray or blue on top, and it has a silver underbelly. The fish is omnivorous, which means it consumes both plant matter and small insects on the surface of the water and aquatic insects.

California roach can grow 20 to 40 mm each year but rarely live beyond three years after hatching. The fish breeds in gravel beds and thrives in cold streams that have diverse environments. Look for the fish year-round in the streams that are prevalent in Yosemite National Park.

Yosemite National Park is well-stocked with several nonnative fish species for sport fishing enthusiasts. Some of them include the following:

Bluegill lives in shallow water in ponds, lakes, and slow-moving streams and rivers in the park. The fish can grow up to 12 inches long and is deep purple or blue in color, especially around the face and gills. It also has dark olive bands down the sides of its body and has an orange or yellow belly.

Bluegill can eat almost anything, it comes across, so while fishing for it, use artificial lures in Yosemite. The fish tend to stick to water with an abundance of aquatic plants and hides between fallen logs and weeds. The fish is best caught during the winter months, so you should visit during the last Saturday in April if you wish to catch it.

Also known as Brookies, brook trout are known for their gorgeous olive green coloring and the yellow speckles that run all over their body. The fish is part of the Salmonidae family and char genus. It prefers to remain in cold waters in creeks and small rivers in Yosemite National Park.

Brook trout are often confused with brown trout, but the two have differences that distinguish both species. For example, the brown trout has a golden brown body while the brook trout is olive green in color.

Plus, brown trout do not have red spots and blue halos, which the brook variety has. The best way to catch this trout is through fly fishing techniques. You will find plenty of opportunities to practice in Yosemite.

Click out our in-depth guide on brook trout for more information.

Q: Can you fish in Yosemite?

A: Yes, if you have a valid California fishing license. Fly fishing Yosemite is even more enjoyable if you don’t break regulations and rules.

Q: Where can I find rainbow and brown trout in Yosemite?

A: You can find both species in the Merced River in the park.

Q: Are lakes and reservoirs open all year round in Yosemite?

A: Yes, anglers can enjoy themselves on Yosemite’s lakes and reservoirs by fishing the whole year.

Q: What are some Yosemite fishing regulations I should know about?

A: While fishing in Yosemite Valley and El Portal, keep in mind that rainbow trout are catch and release only. You can only catch five brown trout per day and have ten in possession only. Plus, you cannot use live bait. You can only use lures and flies with barb-less hooks for Yosemite fishing.

Look for native and nonnative fish in Yosemite in lakes and streams around Yosemite Valley, El Portal, and in the backcountry.

Yosemite fishing can be a delightful experience, but only if you respect the local rules and fish responsibly. Be careful as not following park rules can lead to penalties including suspension of your fishing license, and you can even be banned from the park.