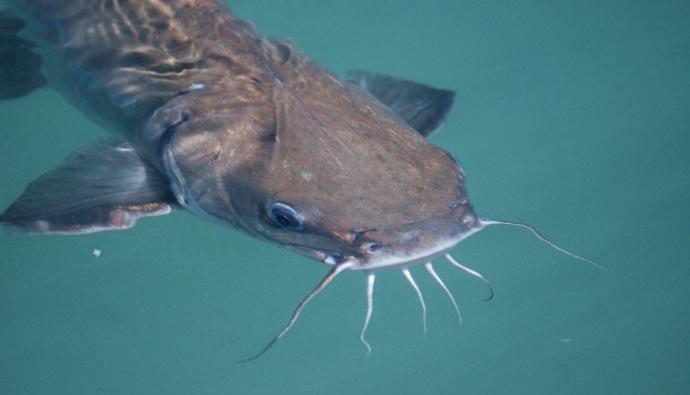 Catfish are one of the most commonly angled fish in the United States. Not only are these bottom feeders delicious to eat, but they can also be incredibly fun to catch.

With species weighing more than 100 pounds, these fish make up the staple of a variety of seafood dishes throughout the culinary world.

Ranging from small, backwoods ponds to the coastal waters of the Gulf of Mexico and Atlantic seaboard, catfish can often be found on the end of an angler’s line at some point during the fishing trip.

Problems often arise during the hook’s removal process and transition to release or into the icebox. In this article, we cover how to hold and handle a catfish safely.

How to Hold a Catfish

Any angler who’s been stuck by a catfish before nose that removing a hook from a catfish is trickier than it looks. Catfish have minuscule sharp spines along their pectoral and dorsal fins that easily penetrate human flesh, but there’s a safe way to avoid this thing.

Anglers looking to avoid being stuck can wrap their fingers around the catfish’s body from the top, behind the fins, and out of reach of the spines to avoid the sting.

By safely and properly placing your hands in this location, anglers may hold and handle even large catfish without being stuck.

The following is a detailed explanation of how you hold a catfish.

Locate the spines on the fins

You should know the location of these before attempting to grab a fish to prevent the small, sharp spines from puncturing your hand. On both the dorsal fin and pectoral fins (behind and sides of the head) are spines that are potential puncture hazards.

To prevent your hands from being penetrated by spines that carry a low amount of hemolytic toxins in a non-lethal dose (a toxin which is anti coagulant o human blood), never grab in front of the spines.

Note: Despite many common misconceptions, the catfish’s whiskers are not dangerous and are used to locate food like little fingers searching the bottom.

When holding a catfish, you should have your hand wrapped around its back. The webbing between the fingers and a thumb should be placed behind the dorsal fin.

When a catfish is taken out of the water, its spines will stand up, and the dorsal fin can then serve as a wedge against which the hand can be placed to prevent movement.

Because it’s safer to place the hand behind the spines rather than in front, which reduces the risk of inadvertently puncturing your hand, cautiously grasp behind the pectoral fins with your thumb and forefinger beneath these fans pointed towards the mouth.

To avoid being poked, keep them safely tucked behind and acquire a better hold by sliding your fingers as close to the fish’s belly as possible while maintaining pressure through your palm on the back of the fish.

If you’re unable to grasp the fish from above, as previously referenced, gripping the catfish from underneath is a safer alternative.

Scoop the catfish up from the bottom with the thumbs behind and beneath the pectoral fin on one side and the remainder of your fingers on the other in the same configuration.

Secure the fingers that wrap around behind the pectoral and dorsal spines in a firm grip, ensuring that any movement does not shake them loose and puncture your hand.

There are bones between the pectoral fin that are solid enough to provide a firm purchase on a catfish. Applying direct pressure to these bones can create a better grip on a wriggling medium size catfish that doesn’t want to be manhandled.

Larger catfish require a slightly different technique to manage their body weight and musculature of these big creatures.

With larger catfish, the front and back technique is the most successful way to grip them. In this case, grabbing the catfish by its bottom jaw will immobilize the head, while gripping just under the gills or closer to the back from beneath immobilizes the body.

This technique is not as successful with smaller catfish due to the less surface area to grip and their dexterity.

With larger catfish, their heavier weight can be manipulated to immobilize them by locking the head down with a grip on the lower jaw and the second hand stabilizing the body closer to the tail.

It’s important to note that with this technique, both hands are operating beneath the catfish on its underside and not on the sides or close to the top where the spines can puncture the skin.

What parts of a catfish can hurt you?

Two major points on a catfish can injure an angler in every species.

The dorsal fin is situated on top of a catfish behind the head and centered on the abdomen. Depending on the species, this may have a single or several spines of varying sizes which can easily puncture the skin and thin gloves.

With most catfish, once they are removed from the water, the dorsal fin will stand upright, making it easy to snag on or puncture exposed skin, clothing, and other material.

The dorsal fin can be circumvented by grasping behind it or gripping the catfish from beneath.

Catfish have two pectoral fins. Each is situated to the side, slightly behind the head, and attached to the abdomen.

The pectoral fins have a central spine and webbing attached, these help steer the catfish while swimming. When a catfish is removed from the water, often, these will extend, providing potential puncture hazards.

To prevent injury from these, the angler should grab behind the pectoral fins or beneath a catfish to remove the hazard from the equation.

A third potential hazard is often not discussed but can be prevalent when gripping a catfish by the mouth.

Catfish have very small teeth that allow them to lock onto and gulp down their prey. These teeth, while not large and razor-sharp like other predatory fish, can cause injury if the lower jaw is not properly gripped.

A loose grip can lead to abrasions similar to coarse sandpaper being drug across the skin. To prevent this, the angler should have a firm grip on the lower jaw of the catfish.

While it may bite down on an angler’s hand, provided there is no lateral movement, the angler will be fine.

It’s recommended that when anglers handle catfish in general, they should wear gloves. Particularly when grasping a catfish by the lower jaw, gloves will prevent slippage and abrasion wounds while also providing a firmer purchase on the mandible.

Because of the teeth previously discussed, a direct bite with no lateral movement will cause intense pressure but little to no damage.

Catfish bites may be painful in the sense that they may bruise a hand depending on the size of a catfish, but the damage will be completely superficial provided there is no skin drag across teeth.

The damage occurs from a catfish bite when the grip is loose and exposed skin is dragged across the sandpaper-like teeth. In these instances, the skin may be abraided to the point of drawing blood due to a loose purchase on the catfish in the lower jaw.

To prevent this, a firm grip is necessary when grasping a catfish by the lower jaw. Gloves can help ensure a firm grasp on the fish while protecting exposed skin from sandpaper-like teeth.

What to do if stung by a catfish?

When treating a wound induced by a catfish spine, there are several steps to take.

Because catfish are such a popular species to angle for, it’s imperative to know how to handle these fish properly.

By gripping a catfish behind the spines, from beneath, or holding larger members of the species by the jaw and below, anglers minimize the risk of puncture wounds from the spines.

Catfish can be delicious and a lot of fun to have on the end of your line, but knowing how to handle them once landed is just as important as a good fight. As always, good luck, and stay safe out on the water.

YouTube
Articles » Freshwater Fishing » How To Hold a Catfish Properly