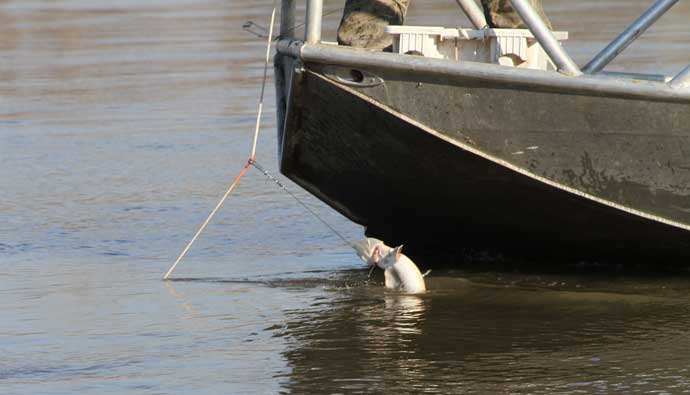 Now that you’ve made or purchased a trotline, it’s time to get it in the water and do some trotline fishing.

There are many different ways of setting a trotline, but we’ll focus on two specific methods, one for catching catfish and the other for catching crabs.

Setting a trotline can be as complicated as you make it. Honestly, the hardest thing to navigate it feels like are the laws set by the state. Once you get past those, then you can do most of the prep at home before you ever load the boat.

Since each waterway is a bit different, we’re going to go through some of the common trotline fishing methods for you to set your trotline based on what you have around you. That means if you have trees along the riverbank, then you can use them as anchors. However, sometimes you just have an expansive lake or river and need to bring the anchors with you.

It’s always handy to know the different trotline fishing methods so you can match the right trotline for the situation.

There are many ways you can go about running a trotline. The easiest method would be to run a line from shore where your anchor point is a tree trunk.

You’d then take your boat and let your trotline out across the width of the stream or river and fasten it to another tree on the opposite side.

You’d need weights on your trotline to have it sag down underneath the surface of the water. That allows the hooks to rest above the ground without touching.

How to Set a Trotline from the Bank

This method is similar to running a tree to tree trotline. Instead, you’re attaching one end of your line to an anchor onshore and running the other end out into the water and weighted down with an anchor.

The onshore end can still fix to a tree, but feel free to use anything that keeps your line secure, and a bit elevated, so your line isn’t dragging on the ground.

You’ll want to attach floats to each end of the trotline to keep the line from touching the bottom of the river. The float that’s on the bank end will typically rest on the surface of the water and is a visual marker for your line.

The end that’s anchored on the river bottom will have a float up the line depending on how deep the river is and how long your dropper lines are. This will keep the dropper lines from resting on the bottom.

After you anchor your trotline on the bank, take your boat and head out in the direction you want to release your line and go until it’s pulled tight. Drop your anchor to set your trotline.

Sometimes you won’t have a bank or tree to set your trotline, so you’ll need to deploy it directly in the water with weighted anchors resting on the river bottom.

One one end of the trotline, place an anchor. Depending on the depth of your river, you’ll need to run a line with a float. From the float will be a certain distance before your dropper lines are located.

Do the same on the other side. This will allow your trotline to not move from its position in the river and the floats will act as visual markers while keeping your dropper lines from resting on the bottom.

If you need to weigh your dropper lines farther down, you can also put lighter weights between your floats and the first dropper line to keep them down.

Setting a crab trotline is a bit different from the standard catfish trotline.

You’ll want to use:

To deploy, drop the anchor of one end off your boat and let it hit bottom. Then slowly move your boat in the direction you want to deploy your line and use a trot prop stick or holder to keep the line moving without you having to do it yourself physically.

Once the line reaches your second chain, lift the anchor over the boat and let it drop. The buoys should be resting on the surface so you know where to come back to gather your crabs.

There’s no hard and fast rule or tips for which baits work the best because everyone’s situation is different. However, there are a few baits worth trying out the gate before you start experimenting yourself.

The awesome aspect of trotlines is that you have the ability to do direct testing of different baits on each trotline since you have multiple hooks on the line. Therefore, instead of rigging a trotline with say cut bait, you can mix and match.

I’ve seen many anglers use a few pieces of cut bait and a single live bait just to see what the catfish were hungry for. Then when they come back and check they make a little note either in their mind or in a notebook to see what worked at that location. This is great to see patterns over time so that you’re more efficient during future outings.

Every state has different trotline regulations. Make sure you’re compliant, so you don’t get fined by Fish & Game. You can get in trouble for many hooks on a line, using live bait or cut bait in the wrong places, etc.

Here are some links to states where trot lining is typical:

Trotlines are one of the oldest methods to catch fish. They are super easy to set up and generally yield some fantastic results. Just make sure you follow the local regulations so that you keep the waterways safe for those who might not be fishing.

Also, since it’s easy to forget about where traps are set, one of my favorite tips is to mark them either with a GPS or on a map. The last thing you want to do is leave fish out there to die without being harvested. It’s always good to be a responsible angler out there.

Trotlining is a lot of fun and nothing beats taking out the boat, setting your traps and coming back to see what you’ve caught. Trotlines can also be a bit dangerous for those who are unsuspecting that they’ve been set. Be sure to properly mark your lines so it’s easy for people and other boaters to see.

When in doubt, ask an experienced trotline angler to help you out.