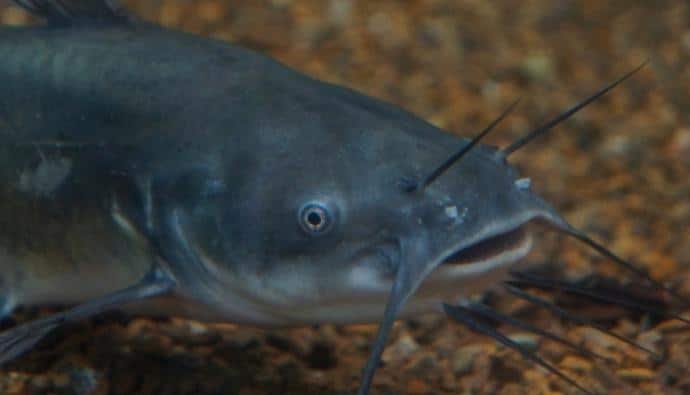 Catfish, one of the most popular species, are both angled for and kept in tanks in the United States.

To the untrained eye, it could be difficult to tell the difference between all these species. However, each type of catfish has its own unique behaviors, habitats, and physical features that we detail below.

In this article, we discuss the different kinds of catfish that are likely to catch and how to tell them apart.

The blue catfish is a fork-tailed catfish with a slate blue back that eventually fades into a white underside.

Found primarily in big rivers with deep channels and tributary, blue catfish like warm water in the winter and cold water in the summer. Preferring clear water, they can also be located over sandy, gravel, or rocky bottoms. These catfish inhabit the Mississippi, Missouri, and Ohio river systems in the US, which range as far west as Texas.

Their diet consists primarily of muscles, crawfish, and other fish as mature adults, while juveniles will eat small fish and aquatic invertebrates. As both predators and scavengers, they are not shy about picking up recently deceased bait fish or other food sources.

For both the male and female of the species, blue catfish do not reach sexual maturity until surpassing 24 inches in length. Gaining more than 100 pounds, the average blue catfish sits between 20 and 40 pounds and lives between 20 to 30 years.

Anglers love catfish because they are large, aggressive catfish that will bite on various baits. While artificial baits can work, recently deceased or live bait provides a much stronger scent which is the primary method of hunting for blue catfish. Bottom feeders occasionally head up the water column to munch on chum or stunned fish.

Though there is speculation that a subspecies of blue catfish exists known as the “High Fin,” it is a myth. It is simply certain genetic bloodlines having higher dorsal fins without any other physical differentiation.

Found throughout the United States, the channel catfish is distinguishable by its jutting upper jaw and aggressively forked tail. The channel catfish comes in a variety of colors, from slate to olive, some even having shown hints of blue or gray. White-bellied, these fish can also be found with a number of dots on their back, although some of the more mature members of the species are devoid of these.

Channel catfish prefer slow-moving water such as lakes, reservoirs, and large rivers. Behind bass in popularity of fish to angle for, they taste incredible on the dinner table and can be found practically anywhere.

Channel catfish primarily spawn from late spring through early summer. During this time of year, water temperatures reach the optimal range for reproduction to occur. Males will choose both the nesting site and guard the eggs once they have been laid.

Flathead catfish are known by many names, including yellow cat, shovelhead, Appaloosa Catfish and Pied Catfish. With the exception of its coloring and lateral “smooshed” looking head, this catfish can often be mistaken for the other two species on this list. Reaching up to 4 feet in length and topping off the scales at over 100 pounds, a fully grown flathead catfish is no laughing matter.

Flathead catfish range in color from dark olive to yellow. Their undersides are often times a light yellow or cream. With the head resembling the overturned blade of a shovel and an underbite, these fish are easily distinguishable from their blue or channel cousins by another feature. Their tail is notched, not forked.

Flathead catfish exclusively feed on live prey, which directly contrasts with channel and blue catfish. These opportunistic predators prefer worms, crawfish, and other invertebrates as juveniles and graduate to fish.

Solitary hunters, these fish prefer deep water and structure. Deep pools within creeks, underneath logs or fallen trees, or undercut banks are perfect ambush sites for these catfish. Throughout the United States, anywhere with slow-moving, murky water is likely to have a flathead catfish.

How to Tell Them Apart

Because these species often inhabit the same waterways throughout the United States, it’s important to be able to tell the difference. Not only is there a significant taste difference, but also local and state legislation dictates both the size and number of catfish you can keep.

Blue catfish are easy to identify if you know what to look for. Here are a few key features.

Channel cats are easily distinguishable by these features.

Flathead catfish are some of the easiest fish to identify because of a few superficial traits.

How many types of catfish are there?

There are over 20 kinds of catfish. However, only three of them are sought-after by anglers in the United States. Those three are the blue catfish, channel catfish, and flathead catfish. These go by a number of names but are the primary members of the species angled for here in the US.

What about the other catfish?

Which catfish tastes the best?

My personal favorite is the flathead catfish. Not only is it an incredibly delicious fish, but flathead catfish feed exclusively on live prey. This means they’re not picking up dead creatures or refuse on the bottom of whatever body of water they are inhabiting, limiting the number of toxins and pollutants they may intake.
Flatheads also have an elongated body making it very easy to filet, and come clean with large, long strips of delicious flesh.

What’s the best way to catch a catfish?

This is entirely dependent on two things. First, the body of water you were angling in. The second is the species you are looking for. However, there are a few general rules that will help you increase your chances overall when angling for catfish.

– Deep water is always a safe bet. Catfish are naturally bottom dwellers and prefer deeper water. Depending on the species, this may be called clear water over sandy bottoms or murkier water with submerged structures.

– Bottom rigs on your line are always a safe bet. While corks can work, the stationary position of bottom rigs works well, particularly in moving water, due to their ability to put out scent. Because most catfish are primarily smell-driven hunters, placing the bait in a single area and providing the catfish the opportunity to locate the bait is always a good choice. Texas or Carolina Rigs work best.

– Smelly bait. This is self-explanatory, but the more malodorous the bait, the higher the likelihood of success. Natural bait is often very effective, but there are a handful of artificial lures that works incredibly well in disseminating their smell throughout the water column.

What is the best way to cook a catfish?

The most popular answer is by far and wide frying catfish in the southern United States. A staple amidst seafood cuisine, fried catfish occupies a lofty position on the dinner plate from mom and pop to-boy shops to fine dining restaurants.
Pan-searing the catfish also provides the same crispy, delicious exterior without the breading.

Catfish are a common catch for anglers in the United States. The next time you hook one, hopefully, this article helps you identify what you have on the end of your line. As always, good luck, and stay safe out on the water.