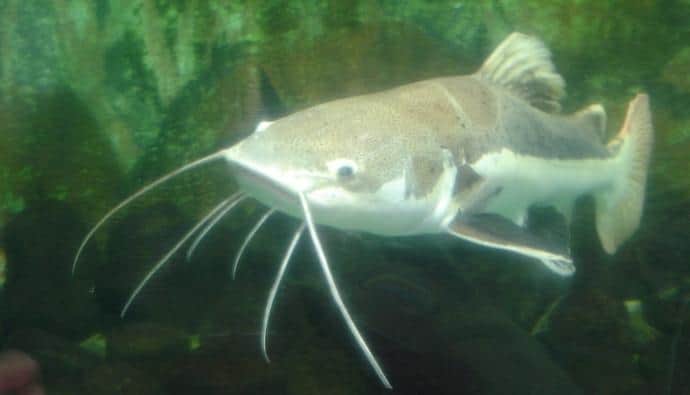 While many fish can be caught in abundance during spawning season, catfish are often harder to angle for during their spawn.

As a yearly occurrence, anglers often bemoan their luck on the water, claiming catfish have suddenly become elusive or harder to catch. This is mainly due to not understanding a catfish’s movement, need to eat, and change in behavior during spawning.

In this article, we cover the change in behavior catfish demonstrate during their spawn and how to angle for them.

When do catfish spawn?

All species of catfish spawn between late spring and early summer when the water temperature reaches an acceptable range, usually between the upper 60s to mid-80s.

A dip or fluctuation in this temperature can cause catfish to pause spawning habits until the water temperature returns to acceptable levels.

The ideal temperature for blue and channel catfish sits at about 80°, while the flathead spawns between 66 and 75°. Geographically, catfish will begin to spawn earlier in the south, while the gradual increase in water temperature takes longer in the north, meaning spawning will occur later in the year.

Because many bodies of water hold two or more species of catfish, spawning can occur at different times in the same body of water.

Also, temperature differences throughout the body of water’s footprint and spawning can occur in various locations earlier than others.

Because streams and creeks which feed into a lake usually carry warmer water, spawning will occur near the mouth of these feeder streams first while taking longer to reach the main lake.

Nesting oftentimes will occur close to the headwaters of a lake which attracts catfish during the earlier portions of spawning, making them an excellent location to angle for catfish.

Each species of catfish has its own unique preference of location where it lays its eggs.

Blue catfish prefer to lay eggs in locations with a wheat current that have shelter. Undercut banks, depressions, cracks in rocks, and root balls are all places where a blue catfish can lay eggs.

Flatheads lay eggs in manufactured structures or debris that has fallen into the water. Caverns dug out of clay banks, root bowls from fallen trees or hollow logs are all naturally occurring locations for flat heads to lay eggs, but they will also utilize metal or plastic drums, sunken vehicles, and even tires.

Channel catfish prefer areas that are isolated, with low light. These include burrows in banks, recesses between or under rocks, and sunken wood piles.

Sexually mature male catfish choose and prep nesting locations before bringing a female to spawn. A female must first deposit her eggs, a sticky, bulbous yellow pile which the male fertilizes and then drives the female away.

A male will protect the eggs from predators while fanning them with his fins to circulate air and prevent sediment buildup.

Depending on water temperature, the eggs will hatch within 6 to 10 days, and the offspring will stay near the nest until ready to swim on their own. During this time, the male will keep watch over its offspring until they depart.

How to catch catfish during the spawn

Sometimes it cannot be easy to catch catfish during the spawn. Often, it’s because anglers aren’t casting in the right place, believing their old fishing holes will yield the same results despite the catfish having moved off to the spawning grounds.

Because catfish often migrate to tributaries upstream from the lake due to the rise and water temperature, small streams that run into the lake can be excellent fishing locations.

Rivers are no different, and catfish will swim upstream into the smaller tributaries where the water temperature is higher to nest and spawn.

Anglers searching for channel catfish and blue catfish may have a more difficult time searching out their quarry as they tend to travel some distance in search of the perfect water temperature to spawn.

Flatheads are less likely to travel and prefer to remain in the same general location each year for spawning.

Tributaries that provide an influx of warm water should be the prime target of anglers searching for catfish during the spawn.

Catfish often ambush their prey from behind or beneath the structure that creates current brakes. To avoid snagging on these locations, it’s best to cast laterally or upstream from the potential snags and allow your bait to float past.

Catfish can often be found beneath river dams throughout the year. During spawning, if the barriers pose a problem in their travels, catfish can congregate beneath these large dams and stay there for weeks, feeding on the variety of each fish, insects, and crustaceans.

The brakes in between the fast-moving water of the dam are usually catfish havens where they lie in wait, allowing currents to bring food to them.

Many of the banks surrounding dams have been reinforced with rocks and metal sheets to combat the erosion caused by the current. There are plenty of potential nesting sites between these rocks for catfish.

When fishing along these stretches of rock, try to locate structural anomalies such as a downed log, half-submerged pipe, or unique rock formation. Large boulders that create changes in the current are also solid locations to cast around.

The concrete used to reinforce levees and dams can be eroded over time, becoming nesting sites for catfish. While the concrete may seem smooth above the surface, it is probably pockmarked beneath the water, and anglers can use fish finders to locate these potential nesting sites.

If bait is dropped directly on or in front of one of these nesting sites, catfish will often straight not out of hunger but for fear that it is a predator attempting to rob the nest.

When fishing these locations from a boat, it’s best to start downstream and move parallel to the bank upstream, looking on the fishfinder for potential nesting sites.

Never anchor directly over, but move upstream from these potential sites and cast the bait so that it floats over the hole or settles nearby.

When shore fishing dams, anglers can employ several techniques. Personally, I prefer to bring out several rods and cast them in carrying locations, targeting breaks in the current using Texas or Carolina Rigs.

The alternative is a hook and bobber, cast upstream and allowing it to float down the current in hopes of it going over or near a nest. This allows anglers to be more proactive in their approach and mobile if the location isn’t working out.

Tips for Angling during the Spawn

Find warm water. Whether it’s a stream feeding into the lake or upstream on a river, the warm water is the most critical component for catfish to spawn.

Catfish need some sort of structure for their nests. Whether it’s to block out light, provide a safe haven from predators or provide a break in the current, structure is necessary.

Breaks in the current are important as they provide shelter and also prime ambush locations for catfish to strike from.

Spawning season tends to rearrange the board when it comes to fishing holes. Anglers can’t afford to sit in one location for too long without success. Instead, try new locations while factoring in the previously referenced tips.

At most, an angler should give no more than 15 minutes to a location without catching fish.

While spawning catfish may not be as hungry, they are surely aggressive around their nests and will not hesitate to strike if the bait is dangled near their eggs.

Float it by casting or fishing directly onto the nest can be counterintuitive to catching catfish. Instead, anglers should place the bait upstream from the catfish and have it float next to or over the best to trigger a predatory response from the catfish without spooking them.

Taking stock of underwater geography can help anglers determine the location of nests. Whether it’s in concrete walls or under submerged logs, the sonar can help you get a lock on the nests, thus finding the catfish.

While many anglers despise catfish spawning season, in the end, they’re just looking at it wrong. Spawning is a season of opportunity for anglers to fish locations usually low on catfish.

Taking a proactive approach and searching out nesting locations can make all the difference in a successful fishing trip.

Remember to locate cover, and pay attention to water temperature, seeking out feeder streams and up river pools. Never fish straight on but cast upstream and have the bait float down. Finally, move around and try new locations outside the usual fishing hole.

As always, good luck and stay safe out on the water.