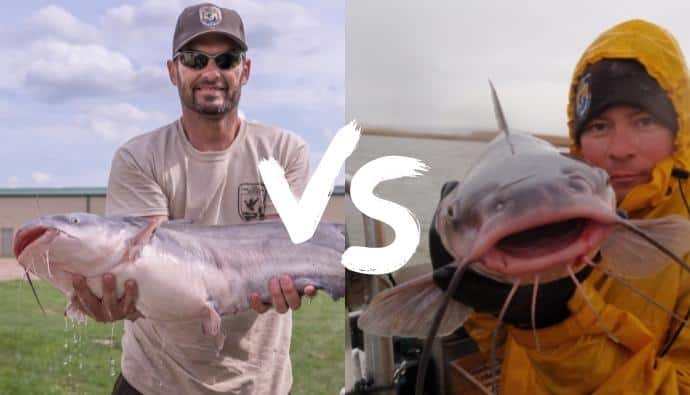 Catfish are one of the most popular fish groups caught for food by anglers around the world.

Within this group, two of the most sought-after species are the blue catfish and channel catfish. Belonging to the same group, blue and channel catfish share a number of similarities, which makes it hard for anglers to tell them apart.

In this article, we will discuss a comparison of blue catfish vs channel catfish in order to help you identify them.

What are the Different Types of Catfish?

Before moving to the comparison of blue catfish vs channel catfish, we need to highlight the different types of catfish. This will help you to understand the characteristics of catfish.

Catfish is a group of ray-finned fish that have whiskers around their mouth. These whiskers are referred to as barbels and give them a cat-like outlook, hence their name.

Catfish are known to be bottom feeders that have smooth skin and no scales. In place of scales, they have sharp spines on different parts of their bodies, including their sides, backs, and fins.

There are around 3000 different species of catfish all over the world, with about 30 species living in the United States of America alone. As a matter of fact, one in every twenty vertebrates is a catfish.

Catfish can be found in every continent of the world, from the Americas to Asia and Africa, except Antarctica. Some of the common catfish species are cory catfish, white catfish, bullhead catfish, glass catfish, pictus catfish, upside-down catfish, bumblebee catfish, wels catfish, etc.

For the purpose of our article, we will discuss the top three species of catfish, which are flathead catfish, blue catfish, and channel catfish.

These three species are the top choices of the average angler, and they can be commonly found in lakes, rivers, and reservoirs around.

While flathead catfish come in brown and pale yellow as well as mottled black, channel catfish usually have an olive brown to grey coloring with dark spots.

Blue catfish, on the other hand, range from slate blue to dark blue and white and could be almost black in some cases.

Now that we have touched on the different types of catfish, we can proceed to a full comparison of blue catfish vs channel catfish.

These two types of catfish belong to the same family and genus but are different species. They are both part of the Ictaluridae family and Ictalurus genus.

Channel catfish are commonly called channel cats, while blue catfish are called hump-back blue. Below is a comparison of their features and characteristics.

The biggest blue catfish ever caught weighed 143 pounds. Blue catfish are fished for their size and strength. They are known to be good fighters that give anglers a fierce battle whenever they are baited.

The appearance is a reliable means of telling a blue catfish and channel catfish apart, particularly when the difference in size is unclear.

As their name suggests, blue catfish have a blue color. The coloring of their skin ranges from slate blue to dark blue, with a white underbelly.

Channel catfish are commonly found in ponds, lakes, reservoirs, and rivers in areas like Northern Mexico, Lower Canada, as well as Eastern and Northern United States.

Blue catfish are commonly found in lakes, ponds, and rivers, as well as brackish water inlets in the South and the Southeastern United States. You can find them in areas like the Rio Grande river basins, Missouri, Mississippi, as well as Belize, Mexico, and Guatemala.

Blue catfish enjoy inhabiting large rivers and fast-moving streams, while channel catfish prefer waterways with low or moderate current. Channel catfish and blue catfish can both be found in the same waters in South Carolina.

Blue catfish usually have a longer lifespan than channel catfish.

Channel catfish and blue catfish are both opportunistic predators, as they consume a varied diet. Both fish species feed on invertebrates and fish.

Young blue catfish feed on aquatic insects, as well as small fish like mussels and crayfish. Blue catfish bite artificial bait but are best fished with freshly dead and live bait. They can be baited in shallow water or deep water, depending on the season.

Blue catfish and channel catfish spawn around the same period, which is in late spring and early summer, with water temperatures around 75 degrees.

When spawning, male channel catfish find nest sites located in dark, secluded areas such as undercut banks, trees, and logs. Once the eggs are laid, the male fish stand guard, protecting the nest.

What is the main difference between channel catfish and blue catfish?

Which type of catfish tastes best?

Both catfish species have a similar taste, which is mild to medium. The taste largely depends on where the catfish are caught. A farm-raised catfish is mild, while a wild catfish is muddier.

Channel catfish and blue catfish are great choices of fish to catch and eat. With their differences highlighted above, telling both species apart will be easy and straightforward.

YouTube
Articles » Freshwater Fishing » Blue Catfish vs Channel Catfish: What are the Differences?