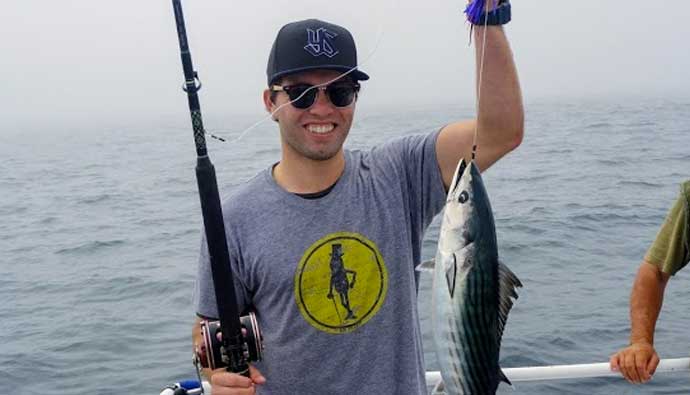 A while back, I was down in Ensenada on a fishing trip searching for yellowtail, lingcod, and a few bonito fish.

The deckhand started trolling and left me with the rod.

Suddenly the reel took off, and I fought with my hands. After what felt like ten minutes, I had a nice size bonito on the boat.

In this guide, I’ll be covering everything you need to know to catch bonito!

Around the world, there are four species of Bonito, all in the genus Sarda. One is found in the Atlantic, and three are found in the Pacific.

What Kind of Fish is the Pacific Bonito?

Bonitos are medium-sized members of the family Scombridae. This family also includes tunas, skipjacks, and mackerels. Think of bonito as small tunas.

Pacific bonito are found from the Gulf of Alaska to southern Baja California and then again from Peru to Chile. In most years, they are common from southern California to central Baja California. However, if the water is really warm (like during El Niños), large numbers will swim up as far as Vancouver Island.

While they spend most of their time within 50 feet of the surface, Pacific bonito have been known to hang out as deep as 360 feet.

Pacific bonito are pelagic (open water) fish that are usually found within 20 miles or so of the shore. They often travel on the outside of kelp beds or over reefs, really anywhere that schooling baitfishes are found. Young ones enter bays and occasionally can be found in the surf.

They are highly migratory and can often move quite quickly from Baja California to southern California, and during warm-water years, often into central California. Pacific bonito may live as long as 8 years. Most are mature at about 2 years old and 2 feet long. Spawning takes place mostly from spring to summer.

Pacific bonito feed primarily on fish and squids. In turn, they are eaten by such predators as marlins, sea lions, and dolphins.

Pacific bonitos are of both commercial and sports value.

If you bleed and keep them cold, Pacific bonito are great to eat, just as good as any other tuna. However, once they warm up, the flesh starts to deteriorate, and only your cat will like them.

Small hard-bodied lures 10 -20cms in length are ideal for both casting from shore and trolling from a boat.

Bonito do have teeth, so heavy nylon or fluorocarbon leaders are generally required to prevent bite-offs.

Bonito are often caught trolling shiny Rapala-type plugs. Once located, they can be cast to with shiny spoons such as Krocodiles.

When in Doubt, Go Live

In California, a prime bait is a nice lively anchovy.

The second choice would be a small sardine if anchovies aren’t available.

If you are fishing from a pier, you can catch live bait with a sabiki rig shown above and catch Bonito and other game fish that way.

Bonito are caught on both bait and lures. They like flashy lures with silver in them. They can be chummed to the boat and are not usually shy.

Your reel must be large enough to handle the powerful runs and have a smooth drag, as it will be put to the test when bonito fishing.

The Daiwa Saltist 4000 has the overbuilt Digi Gear. Providing nearly 40 inches per turn retrieve speed, which may become a critical feature when the bonito turns races back at the boat.

It is smooth and reliable due to Daiwa’s proprietary Mag Seal, a vicious, magnetic material that dynamically lubes and seals the Saltist.

Another reel with a big performance in a small package is the Van Staal VR150, with 37 inches per turn and all the drag you will need.

Shimano is always known for smoothness, and the Twin Power 5000 XD is no exception the 41 inches per turn is the best in class.

Your tackle should be scaled to the size of the game fish targeted. Bonito caught from piers are nearly always under 6 lbs or so, so a 10 lb line should be fine for keeping them out of the pilings.

At the offshore islands and banks, the game fish get larger, so scaling up to 15 lb or 20 lb tackle might be wise. Few, if any, anglers go offshore to target these, so they are usually an incidental catch when targeting other species.

Whatever tackle is used for the other species targeted should be sufficient for bonito. For the smaller ones, a Daiwa Certate spinning reel in the 2500 size or so works great.

The benefits of a braided line are priceless when chasing bonito. It offers some distinct advantages.

Most notably, the positive impact it has on casting distance, which is a distinct advantage with this fast-moving and hard-fighting target.

As for leaders, many anglers feel the eagle-eyed bonito gives good reason to upgrade. Fluorocarbon leaders like Ande and Seaguar in the 10-15 lb range work well.

When fly fishing for bonito, the standard fly fishing or light tackle technique for bonito involves visual observation of baitfish. Bonito has a tendency to leap from the water after prey gives away their presence. Diving birds, which will follow feeding bonito, are another indicator of activity. You will often observe terns or gulls behaving differently when above schools of feeding bluefish or stripers.

When following bonito, the movement of the birds is much more frenzied as they attempt to keep pace with the fast-moving game fish. Very often, it is but one or two birds that reveal the presence of bonito.

The speed of bonito is what presents a real challenge to anglers. They will move from point to point with incredible speed. Flipping a fly or lure into the melee takes speedy casting, accuracy, and a degree of discipline, especially with the fly rod.

Bonito can be finicky feeders and, at times, are difficult to hook. But they will more often than not take well-placed and deftly retrieved artificials.

Going light is the key to consistent success. With this type of gear, a thin diameter line, like a 15 to 20-pound test braid, allows for longer casts to reach feeding fish at a distance.

The lack of stretch of the braid also allows for solid hookups. When using the fly rod, the preferred line is an intermediate density with a 15-foot clear sinking tip.

While you can certainly subdue bonito on a 7 or 8-weight rod, most choose to rig a 9-foot, 9-weight. Most of the bonito in the New York and New Jersey areas are between 6 and 8 pounds, but they do reach sizes of 12 pounds or more.

When fishing for bonito, it is important to maintain a constant speed.

Bonito can cruise the water fast, so there is not much chance that you can out reel them. Variations in speed, however, can cause problems. Too slow gives your lure easy pickings to an opportunistic tuna; too fast can cause your lure to “skip” across the water making it harder to get a good hook set.

When you come upon breaking fish, try to position the boat upwind or up current of the school and shut off the motor.

This way, your engine noise does not disturb the feed ahead of the arrival of the bait. This should give you and other anglers the best opportunity to put your offerings on target. Try to lead the fish by 3-4 feet, allowing them first to see and then take your offering.

In Southern California, they can sometimes be caught from the shore which makes them accessible to any angler. Their oily flesh makes them good baits for sharks and other large predators. They are good game fish to get kids started on fishing.

When fishing or trolling from a boat, it is a good idea to look for schooling baitfish. This will usually mean that bonito are close by. Some fishermen will chum the water to bring in schools of smaller fish.

Trolling is a very effective way to catch bonito. Just about any lure you can cast, you can troll. This can be a highly effective method if bonito are not showing in the water or popping up.

When handling Bonito, they tend to really fight, making it hard to remove the hook.

This is an example of where a good pair of fishing pliers would be handy to have on hand.

They tend to calm down quite a bit if you hold them sideways upside down. That actually works on many fish.

Make sure you handle them with wet hands if you are going to release them to avoid removing their slime coat.

How to Cook Bonito

This is where a good fishing knife will come in very handy.

Before anything, as soon as you catch a bonito, you need to bleed it. They will spoil quickly if possible. Put them on ice.

Fillet down the whole side. Flip it over and cut down each side of the center bones to get two boneless halves from each side.

Fillet as normal, run along midline for some little bones, and you may end up ‘loining’ it.

This food fish is fun to catch that puts up a heck of a fight. When you prepare bonito meat properly, you can make some of the best-tasting dishes. If you have leftovers, then you can also use them for chum when going for sharks from shore or boats.

Not a Trash Fish, But a Food Fish

Bonito meat is a low-calorie food fish because it contains fat lesser than tuna fish. It contains protein and iron at the same level as tuna. It also contains taurine, which promotes the decomposition of cholesterol by the liver. And niacin (nicotinic acid) is a kind of vitamin abundantly.

There are several good recipes for bonito meat online. It can be prepared in many different ways and tastes good when seasoned with a bit of sea salt.

They Can Be Annoying

Some saltwater fishermen view bonito fish as a nuisance, especially when kite fishing or fishing for sailfish.

The presence of bonito is not necessarily a bad thing, though. That is a sign there are smaller baitfish schools in the area that the bonito are following and hopefully with other fish like yellowtail nearby.

If you have never been fishing for leaping bonito, we recommend you give it a try. You will not be disappointed!